It's a new event to the calendar this year and I reluctantly passed up the chance to go for another Thames Path recce with Rodrigo favouring some hills instead.  I felt somewhat guilty about that but he ran the second 50 miles of the TP100 nevertheless solo which is a great effort and a huge boost of confidence.  I need some hill practice for the Comrades and I'm now heartily sick of the Thames Path as it's right next to the doorstep.

The Oldham Way Ultra site lists the entrants and it was obvious this was going to be the smallest field I've ever taken part in with just over 40 registered.  It's a 200-mile drive from home and an early start with a race briefing at 7:20am, preceded by registration plus the clock change means B&B.  I'd found one only 3 miles from the start and it was extremely cheap and I was to find out why in about 200 miles' time.

I took the scenic route up. I had to drop a Mother's Day card in at the folks in Leicestershire on the way (having missed the last post again) and anyway there's some spectacular scenery around Buxton so I let that roll by the windows, not minding regularly being reduced to a crawl by the usual collection of timid drivers you get in your way whenever you go anywhere.

I considered taking some photos but I was already much later than planned and was due to meet up with some fellow TP100 runners in the pub for beer and dinner. 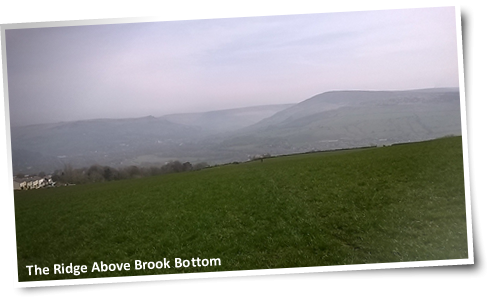 FInally I turn up at the hotel about 6pm in a descending mist having been sent the most ridiculous route down single track roads by the navigation app on the Nokia.  It's no Ritz but it's only Â£28 (without breakfast - too early for that) and its only for a few hours too and on Booking.com moments ago almost every single room was available so it was going to be very quiet.

The staff are very nice people.  It's customary to greet you with 'are you alright?' up here in a manner that suggests concern for some minor but briefly painful mishap like banging your head on a low beam.  I assured everybody I was indeed alright, dumped my stuff in my unpromising room.  The bed was so spongy the bag I threw onto it bounced straight off onto the floor.

I managed to lock myself out within 5 minutes of arriving so had to rectify that with another round of 'are you alrights' thrown in gratis as the spare key was broken out for the 'daft bugger'.

Paul knows a pub, he picks me up and we're soon tucking into a very solid-looking cheese pie and Hoptimist beer with two other runners in the race tomorrow - Ste and Alan.  Ste is pacing the 100; Paul and Alan are both running and I thought we'd talk tactics.  It soon became apparent that none of really had any, this being our debut 100. I've yet to meet anyone running it who actually has a plan including me.  But a good night of chat and beer nevertheless!

Returning to the hotel there's ominously a lot more people turned up including a DJ and a load of 'we'll miss you' balloons and with a sinking heart I realised I was for it.  To cut a long story of 80s tunes bizarrely segued into hard house, they called it a night at about 4am.  There was only one saving grace and they didn't play either 'It's Raining Men' or 'Girls Just Want to Have Fun' both of which cause me to turn green, bust out of my clothes and burn the building to its foundations. 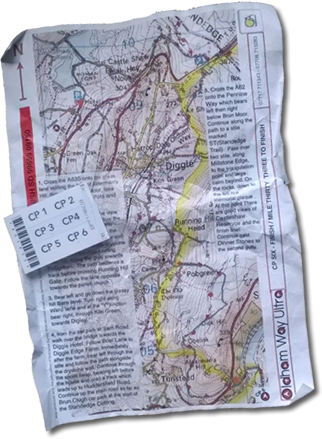 I head to registration with a spinning head and I'm one of the last to show up by the look of it.  For some reason the drop out rate is high and there are only just over 30 in the race now.  I figured the field would be very spread out before long.  They herd us to the start line, count down from 5 and send us off one our way along a path between New Year's Bridge and Dowry reservoirs into the mist and up the first of many hills to come, a map to checkpoint 1 flapping in my hand.

The route is the entirety of the Oldham Way which is a circular trail, marked sporadically and over most of the highest local peaks.  I've loaded the course into the Ambit but even so the entire field has taken the wrong turn within a mile and this was to set the pattern for the day.

It's surprising how easy it is to get lost even with the GPS watch but without it I'd still be out there trying to fashion some sort of shelter out of twigs and discarded sheep wool.

I use the Salomon Mantra shoes again. I don't know if it's those or (probably more likely) all the longs runs I've done lately but my feet felt pretty sore within a few miles of the start.  It's certainly a trail shoe route though there is some road.  In wet weather a lot of it would have become very difficult but we had it lucky and it was largely dry with the sun coming out soon after kick off and beating down on us for the rest of the day.

The first half of the race is mainly downhill with a few spikes to keep you on your toes but the real testers are to come later on.

There is some stunning scenery and I wish I'd not buried the phone so tightly in my backpack so I could have been bothered taking it out.  A rise past Brushes Clough Reservoir turns to mad, childlike glee-inducing descent down to a plunge pool at the base of a waterfall. Across open fields for a couple of miles and then our group makes its first cock up and adds half a mile on to the route through a farmyard littered with malevolent-looking dogs that weren't too happy with our trespassing.  It was such a comprehensive cock up we had to pass those same dogs three times and each time they got more upset about it.

More easy miles pass through fields and stiles down to a long stretch long the Rochdale Canal.  Somewhat hard on the legs after the fields but with the boost from passers-by cheering us on.  The route leaves the canal in Failsworth into a park where someone randomly offered 'chocolate, mate? and thrust a double-decker box of All Gold under my nose which I politely turned down. who knows what was in those? Rohypnol praline?

Failsworth is followed by some more what would otherwise be tranquil scenery with some testing little ascents over the River Medlock and onto a high ridge looking down onto a golf course below with a precarious-looking cliff edge adding some spice.

Into Daisy Nook Country Park and towards the fourth checkpoint and I'm starting to feel it by now.  The checkpoints are an increasingly welcome break but they are lacking in savouries which is my only issue with the organisation on the day.   It's all a bit cake and jelly-baby heavy.  From this point on the route starts to become a bit of a blur in my head but I know for sure the climbs had started.

There are some serious gradients and they reduce speeds to a crawl with even walking up them a struggle, especially when it's all tussocky grass with swamp chucked in.  At Brook Bottom a 14% grade hill drags on for a third of a mile with the sweetener of a fantastic view from the top - there were better views to come but this is the only time I actually got the camera out!  The path drops down into the valley only to rise out again at an even steeper gradient of 16% (thanks to Google Earth).  By now I was gibbering and talking to the wildlife of which there was much, idly chewing impassively as I picked a path through the mire their hooves and pats had generated.

The section down to Dove Stone reservoir on another day with fresh legs would have been a real treat.  Forest trails with dappled sunlight and a generally soft loamy surface; later more stoney with stream crossings and the odd bit of clambering about over rocks - perfect. Only this was over thirty miles in and instead of bounding over the stuff I was continually snagging and stubbing feet on anything going without the energy to lift them off the floor by all that much. The view over the reservoir, and later looking back the other way as the course circuits the water were amazing but you have to work for them as the path loops a fair way past the South East corner, crosses a stream and then heads back on itself to the lake.  Dove Stone itself is full of small boats and everyone and their dogs are walking the trails but I felt a world away from that with battered bib flapping in the wind, groaning limbs and salt caked all round my eyes.

The final checkpoint was around the head of the lake and up to a car park via another steep slope.  I basically ate crisps and drank coke for 5 minutes there and refilled the water bottle which I'd started to draw on much more frequently than earlier in the run.  At this point my watch battery died so the last section was going to have to be map only which didn't fill me with confidence as I was alone with not a soul in sight.

After a short lull encircling a hill there's a severe climb up to Pots and Pans - the obelisk atop Aldermans Hill. It's another 14% slope on average over half a mile long and taken at a crawl.  From here on finding the route was a challenge and I made several errors though probably only a time loss studying the map more than additional significant distance.

'Only 3 miles to go' shouts the Diggle Hotel pub garden contingent cheerily but they've got beer so it's all right for them.  There's one last sting in the tail with an 8% hill for the next mile and a half.  I've been caught up by another runner by now and we walk up it together bemoaning the injustice of it all as a quick trot across the valley would have had us home in a fraction of the distance.

Finally we summit having been in danger of being overtaken by two pensioners and we're on the home stretch with a section of winding road back down to the two reservoirs we crossed nine and a half hours earlier!  We both resume running for this bit and that feels like a positive but I am staggered that it has taken so long to complete this race.  At the finish it's clear everyone had underestimated how hard it was.  I'd thought I would be halfway back down the motorway by now.

One of the team dishes out tea and makes bacon butties to order which taste like the best thing ever invented as we swap war stories and UTMB points.

It feels great to have completed in one piece and still able to run as it was a real test.  The TP100 is well over twice as far - I think I will make this the last time I consider that unpalatable fact - but it's flat as a board so I think a steady, conservative pace will eke out the resources more efficiently than this run allowed.

If you fancy trying this out the date is already set for 22nd March 2015 and this is the official web site.

Next stop, the London Marathon in two weeks.
#Salomon,  #Training,  #Ultra Marathon,  #Marathon
Comments
No comments yet.. why not be the first?
Most-read Posts