2nd March, 2014
As the days until the Thames Path 100 disappear at an alarming rate of knots this was to be an essential training run.  It wasn't in the original plan but stepped in as understudy to the Country to Capital which I lost to injury.

I'd never heard of the race, maybe because it had only been run once, but found it on the UK Ultra Marathon Running site - a great resource but they don't half make you sweat for it as, inexplicably, you can't search by date.

It's a cosy 70 mile drive from home and you have to register by 7:45 so I decided a B&B was an unnecessary extravagance given that it would have meant a meagre hour extra in the sack before coaxing the bones into action. So the alarm goes at 5 and I head out for the M25 in the gloom, wondering idly if the calf will hold out or blow up before the first checkpoint. 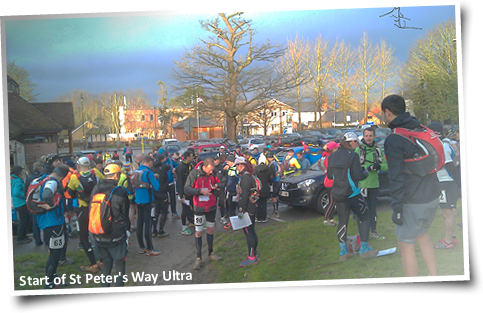 At least it's easy to find the start and there's free parking right there.  There's a strict minimum kit requirement and I was surprised to see everyone was checked for compliance before they were allowed to register.  I overheard a few exchanges arguing the toss whether a rain jacket counted as the base layer or whether they had to be separate and incredulity that an extra base layer was required at all when 'I've done the Brecon Beacons, mate'. 'I don't care if you've done the Iditarod in nipple tassles' is what I wish they'd said back. I'd got all the necessary bits and pieces so, unlike my driving test and my first swim a length in a pool test, passed first time without a near fatal collision or massive ingestion of chlorine.

As always it's a real bonus to get to meet Twitter people in real life and before long I was chatting to Naomi Newton Fisher who's also debuting over the 100M distance at the TP100 in May.

This is the smallest race (in terms of runners) I've ever been in.. probably only about 80 people or so. Entry was only limited to a 100 in the first place and of course there are the usual dropouts. Several on the route in a spectator capacity as it turned out too.

15 minute intro which can be summarised essentially as 'don't be an arse' and 'it's muddy' and we're off with my new Ambit 2s failing to register the fact but looking the part. I never did work out how to work it in time as it goes. Preparation, folks!

The route is the entire St Peter's Way from Chipping Ongar pretty much due East to Bradwell-on-Sea which, as the name suggests, is on the coast.  The race instructions made dire warnings about the church at the end of the race being devoid of both light and heat and in general completely unwelcoming in every way so I can't say I was that enthused about coming across the place in 8 hours time.  I've no idea why St Peter, or a later fan of St. Peter, first chose to walk this route in the first place. Maybe he did it for a bet or something but Bradwell isn't exactly Las Vegas and it seems a strange choice of destination.  That said it passes some decent enough scenery and the odd quaint village so it could be less appealing on the eye.

We had some good weather for it.  It was blowing fairly strongly but largely in the right direction so that wasn't an issue.  The sun was doing its best to help out too and it was actually warm in parts but the issue from the start was the remnants of the appalling weather that's battered the South so far this year.  I'm getting used to this after the Thames Trot was re-routed due to flooding, the Devon Coastal Trail was rerouted due to flooding and Eton Wick was surrounded by raw sewage, due to flooding.  From the off, with the exception of the short tarmac stretches here and there, the course was a total bog.

The field was small and from the outset seemed to coalesce into discrete and widely spread apart groups with a similar comfortable pace.  I'm with 6 or 7 others and there's another group ahead of us consisting the leaders and numbering about 10.  I didn't see them for dust until the finish with the exception of one who'd got lost (at least he said he'd got lost and was one of the leaders!).

There are 4 checkpoints and we're given a laminated map plus written instructions at each in exchange for the old one.  I didn't use them at first as the GPS has a handy squiggly line on it which proved accurate enough.  Actually the route is entirely on the path so it should have been simply a case of following the markers but these proved elusive in several key areas and I'm sure many got very lost.  Each checkpoint was well stocked with provisions (better than the TT50) and from the outset I have to praise the volunteers who could not do enough for the runners.  They were even taking banana peel off me and proactively asking what they could get for me etc.  That's not happened before!  They were also extremely enthusiastic supporters which helped a great deal, especially in the latter stages.

As I alluded to earlier the whole course is a swamp and I struggled for any grip throughout.  I'm really looking forward to the next race where this isn't the case as it means every leg muscle has to get involved to stabilise every single footfall and this really takes its toll when you're out for so long. I wore the Salomon Mantras but with hindsight something more lugged would have probably coped better.  The road sections, while grippy, felt incredibly hard on the legs after the soft off-road so there was no relief to be had from them.

I'd pulled ahead of my group by the first checkpoint around 9 miles in, stocked up with a kids party combo of a couple of cocktail sausages and jelly sweet things but within 500m I'd managed to go off the course and was fighting my way down a narrow path overgrown with several varieties of things with spines.  The GPS urged me on but some 6th sense (common sense) told me this was totally wrong and I had to backtrack through the same bramble-fest and this time they seemed more prepared for my presence and landed some decent blows.  Of course this wasn't the route at all but if you stick a waymarker on a bridge it looks me like you're supposed to cross it.  So I'm back behind the group again the composition of which constantly shifts as each individual in turn seems to have a spell of getting the route right while the rest cock it up and have to backtrack. 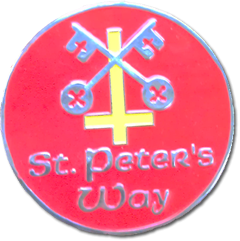 From some time after the second checkpoint and for the remainder of the race I ran entirely alone as after a quick stretch I lost the group and there was no sight of anyone behind.  I ran into a few local oddballs on the way and a rheumy-eyed old boy who engaged me in conversation for a good 5 minutes which such questions as 'where is your organisation based?' A bit of an interrogation though he stopped short of 'who are you working for?' Eventually after I'd pointedly looked at my watch several times he let me go with the parting shot of 'you young men should find something better to do with your time'. I think he meant that in a good-natured way! Nice to be called 'young' though!

Checkpoint 3 arrives soon afterwards beyond another frustrating game of find the route markers. I'd fondly imagined the group ahead would still be there but no such luck.  I put away a lot of fluids - I'd been surprised how dehydrated I was getting despite carrying a litre of water as per the mandatory kit. That had seemed overkill but was glad of it.  'That pub does great Sunday lunches' a marshal cheerfully tells me and on I press making do with a slab of chocolate and a chicken nugget.

It's pretty much all unremarkable fields (and I see looking at Google Earth now, I ran an extra one!) until reaching Maylandsea Marina - civilisation! - and on to the village of Steeple along some sea defences which provided a good surface to run on for a change. Knowing the finish was on the coast and this marina was obviously attached to it in some way helped.  My watch had packed up by now, despite the instructions saying I'd get 12 hours out of a charge it had died in under 6 which was disappointing especially as I had to rely solely on the map now.  As you get tired little things irritate and the laminated plastic of the map flapping around in the wind was certainly one of those.  I'd rolled it into a baton but without the watch GPS for backup found I had to keep referring to it and it started to become a real pain.

The final checkpoint was a mile beyond Steeple and I stocked up on provisions and was pleased to see the last stretch was 'only' 8.2 miles rather than the 10 I'd been expecting. 'There's much less mud from here on' said the help.  Lies. It was back to the bog not 50 metres from the checkpoint but we British jut out the chin and press on without complaint don't you know.  4 more miles of boggy fields until the village of Tillingham and onwards with every dog now taking considerable interest in my mud-caked form.

There was a clear change in the sky that indicated the sea a way before reaching it and having taken the wrong turn for a final and frustrating time the route climbed up onto some sea defences and the finish was visible away in the distance.  Not only that but the wind was blowing a Southerly pushing me along.  Those last couple of miles took an age; the chapel that was the finish never seemed to get any closer but I was still running well and gritted it out.  Cue more profuse cheering from the volunteers, more cake and cups of tea.

This was a great training run for both the TP100 and the Comrades and the mud only made it more of a test, especially mentally, which can only help.  The organisation was great and so was the team of volunteers which really made the day for me. I finished in 7hrs 58mins, 20th position.

I met the 2nd time (and therefore only!) winner, Richard Ashton post-race who had taken 28 minutes of last year's time despite worse conditions and posted an incredible 5:34.  I just cannot comprehend how he did that with that surface; a superb achievement.

So in all a great day's work. I'm pleased to have another long training run done, I kept going all the way and the calf miraculously made no complaints at all.  I really can't think of any downside beyond an irritated achilles insertion point which I'm sure is the shoes rubbing.

Next up is the Ashby20 next weekend (9th March) which I'll probably add a few miles to and make it a full marathon.  It's actually 2 laps passing my parents' house both times so there's the risk I'll subtract a few miles and make it a half instead but we'll see!


#Trail Running,  #Ultra Marathon,  #Marathon
Comments
No comments yet.. why not be the first?
Most-read Posts