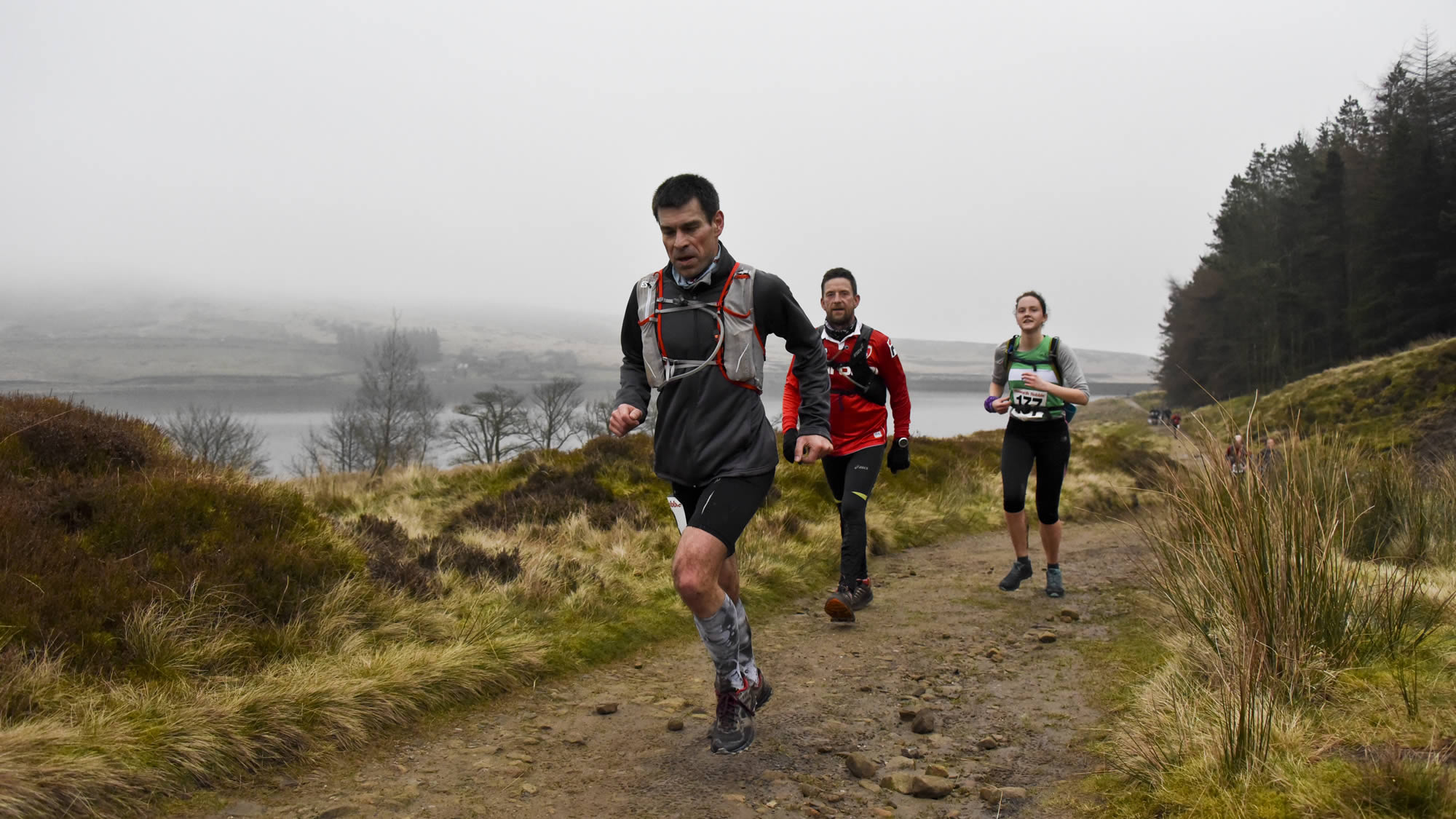 Cycling 70 miles to Swindon - falling without styleMy top 5 races - based entirely on the food!
share this story

13th March, 2017
I may as well move to Haworth. I now know the bar staff in the Fleece by name. Thus adding the place to a long list of other pubs with a similar thing in common.

In common with last year I'm finding it ridiculously easy to make the effort to get to a race halfway up the country while having far less interest in putting in a similar run in my own patch. Even though my own patch is hardly a scrapyard. Who else is finding this? It's not as if it's racing v training that's motivating as this was always just going to be a long run at an easy pace.

There are so many great races up here and some of the greatest landscapes to play in. December was the Auld Lang Syne fell race; January the Hebden 22, both of which slightly overlapped with the route of this one. The Hobble is 50k over the fells with around 1,500m of climb.

Boston is coming up in 5 weeks and there's a road marathon in Limassol next weekend (another LSD run, this time in the SUN) and I'd like to have a reasonable effort in Boston so, as I say, no heroics needed here.

There's fell-running royalty at the front as this race is the opener for the UK Fell Running championship and also is the trial for the Trail World Championships in Badia Prataglia, Italy. Tom Payne has flown in from France, Gareth Hughes, Math Roberts, Danny Kendall and many others are here, all of whom would churn up the mud just that little bit more for us lot following a long way behind.

A big queue for registration meant there was no chance of the 8am start. Another thing to like about fell races. Nobody cares how long they are exactly, and nobody cares when they actually start.

The Hobble kicks off outside the aforementioned Fleece and I spend the whole race and the several weeks before it under the illusion that the entry fee included a free pint of Boltmaker in the bar afterwards. I've no idea where I got that from. But the only disappointment from this fantastic day was that it would turn out I had to pay for all my beers!

The weather's just about perfect for running but a low mist obscures the view and everything has a matte grey background which lasts all race and is a shame.

I started near the back, mainly because I didn't know where the start line was and trotted up the main street's cobbles and out towards Bronte Bridge in the pack, queuing for the narrow bits and the stiles past the beck and up to Top Withens on the Pennine Way.

The first aid stop is past Walshaw Dean and Widdop reservoirs about 8.5 miles in and I grab little more than a biscuit from the car boot and keep on.  Some nice running here with plenty of downhill on easy trails and a few more reservoirs pushed past the eyeballs while chatting with a few fellow runners to pass the miles. 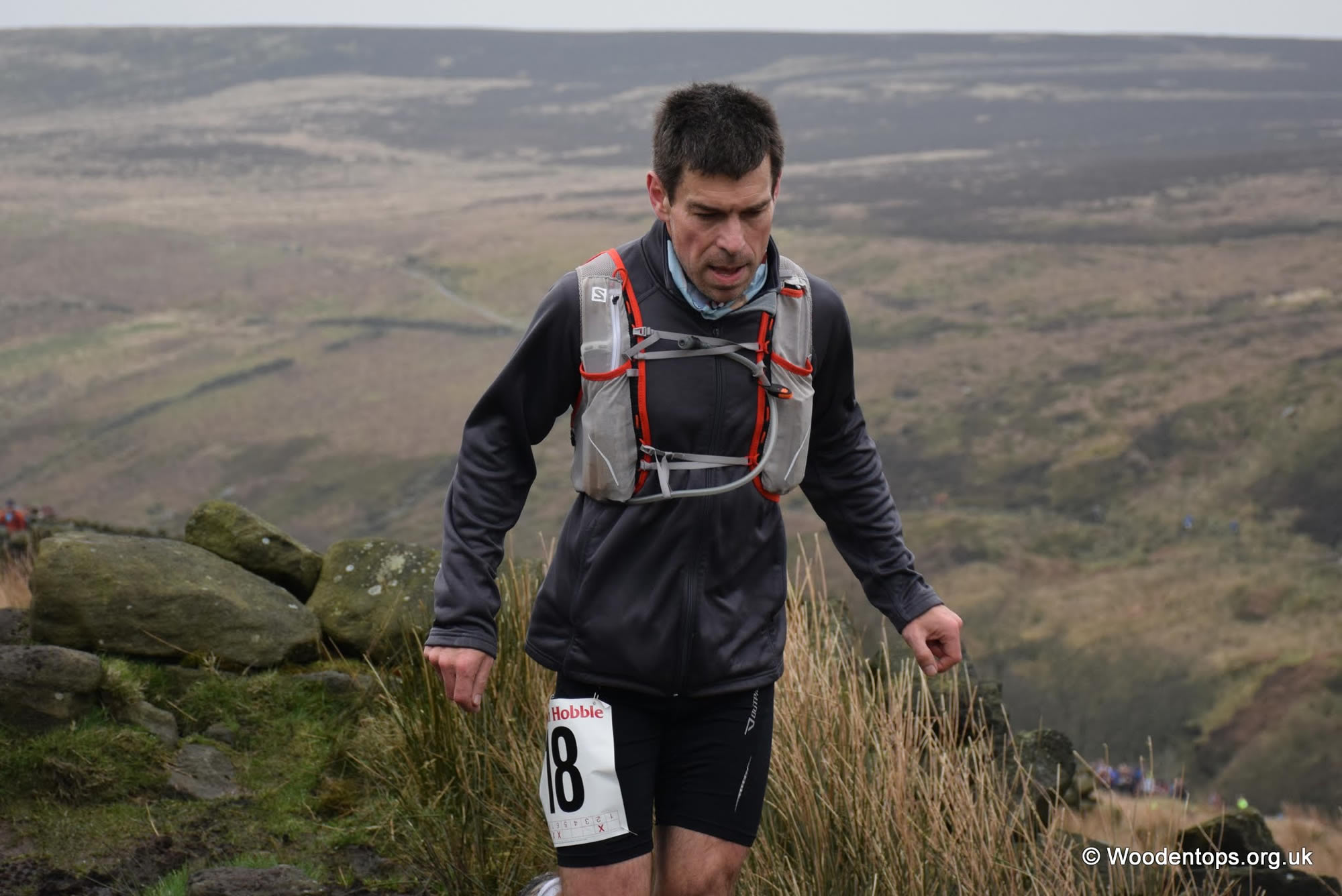 The second checkpoint leaves the trail onto the Long Causeway - a fairly busy (for round here) road - passing a cluster of wind turbines on the ridge, their blades vanishing into the low cloud when languidly reaching the top of their sweep. It looks like it goes on forever but it's only a mile or so before the trail proper is rejoined after a fairly slow slog up some gradients. I thought the checkpoint was halfway thanks to failing to take a lot of notice of the pre-race info which is sadly becoming a habit. 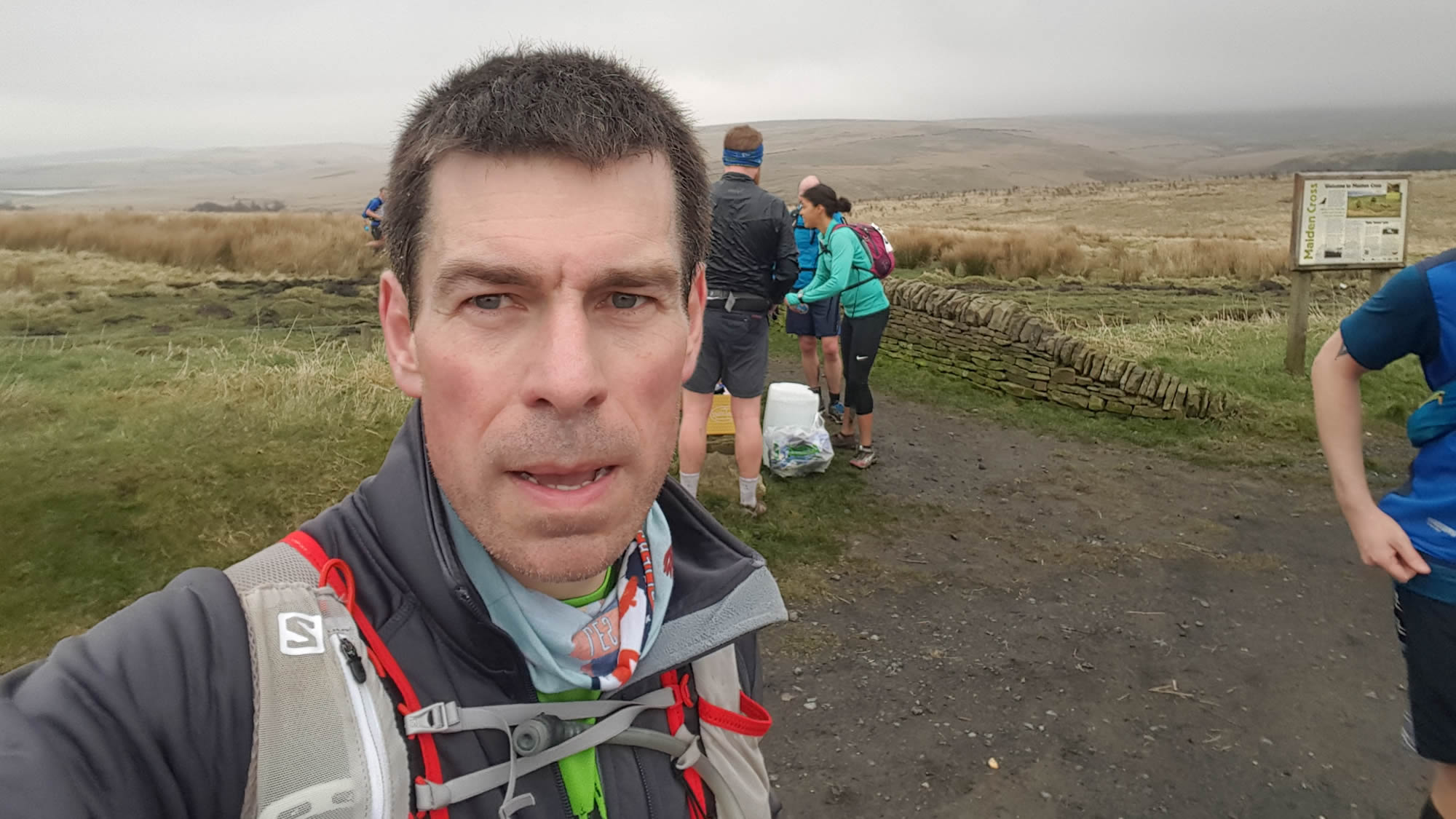 The next aid stop - which this time was about halfway - featured freshly-cooked hot dogs! They smelled amazing but I thought better of trying one, reluctantly settling on a quarter pork pie which was lovely and salty. The trail rolls over the hills and alternately coats shoe to shin in a concoction of mud and slurry then washes cleanish in standing water before delivering you to Todmorden. You have to keep your wits about you to navigate the several small towns on the route as the path twists and turns abruptly and without obvious signs through small alleyways and backyards. I'd have got lost for sure here had I not had sight of a couple of runners just in sight ahead as the trail drops to the River Calder.

There's another checkpoint at Mankinholes - this time offering whisky! Tempting as it was, that too I passed up! It would have probably helped with the next section up to Stoodley Pike. It's a steep climb but, as with all the climbs here, not especially long. 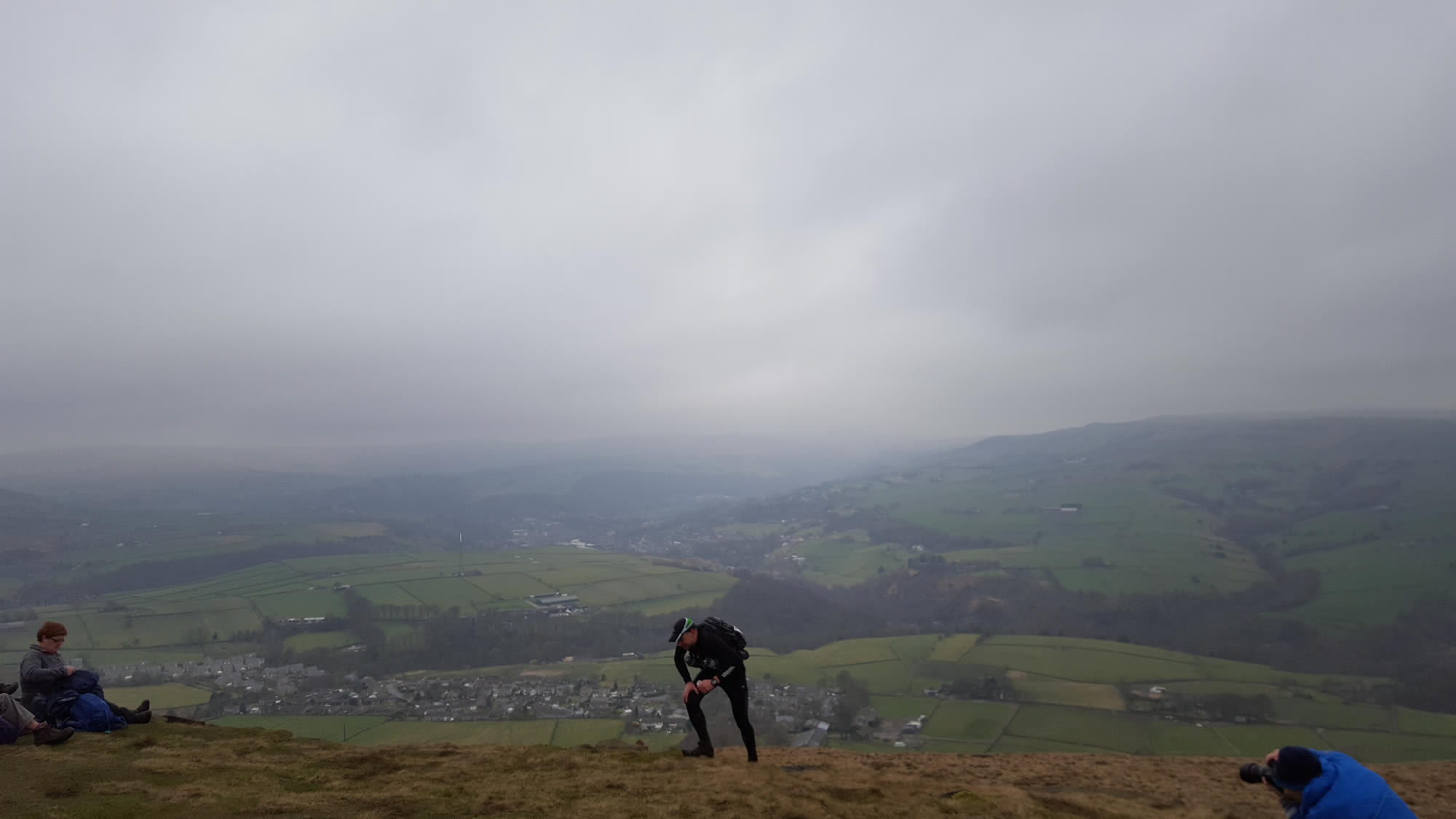 The descent via the Pennine Way takes in some of the Hebden 22 route in reverse so was familiar before it steepens on road down into the valley before immediately climbing back out to Heptonstall. I walked a fair bit of the road, watching a handful of cyclists making the cimb in low gear and thinking of my impending ride to Paris and the unfinished business getting to grips with the cleats :/

It feels like we've broken the back of the race by now and I'm enoying the running and feeling strong, and keeping the walking to a minimum up the last long climb to
Top O't Stairs and the last few miles to Haworth. The route passes through Penistone Park which is so familiar to me from the Auld Lang Syne race and that enhanced the run-in knowing there was little left to go.

A few more metres to the school hall where we registered that morning and the welcome site of a massive tray of donuts which I laid into.

I really enjoyed that. The race and the donut. As is often the case despite running 30+ miles my appetite takes some time to come back and I don't feel like eating immediately. It's like jet lag for the digestive system as you get hungry about 11pm instead (when everything's shut!). Gut lag perhaps?

I'll definitely run this one again, and I can feel another Hebden/Haworth double coming on next year diary permitting. As with all LDWA events, organisation works well and is unfussy; there's plenty of food on offer and the charges are extremely reasonable. This event was £13.

You don't get any fancy fluff - medals, T-shirts etc but you have enough of those, right? I highly recommend it - it's hilly while being very runnable and would suit someone new to ultras.

Many thanks to all the volunteers who made this possible. There's an 11-hour cut-off for this event so many have given up their entire weekend to allow it to happen.

I finished in 5:46 for the record - the perfect long training run

I met up with Sarah and Johnny afterwards for several pints and some of the Fleece's very decent pub food to put the calories back and swap war stories from the race.  It was great to finally have the chance for a proper meetup having only managed a fleeting hello to date.