23rd March, 2014
Second race in consecutive days, another 9am kick off and another drive to Loughborough.  I've entered this race 3 times now and never turned up so it was a minor victory even to make it to Market Square.  One of the previous occasions was lost to a night on the lash round Loughborough town centre followed by a massive curry and all the trimmings.  If you're going to miss a race make sure its for a proper reason.  Like a bloody good night out with an old friend.

Actually I did run the old incarnation of it.. It's only been resurrected those 3 years but I ran it back in 1986 while still at school!  It was a completely different route and race with the exception of the name.

I've lived in Loughborough for many years but I've never run this route or the trails that made up the off-road section of it.  Either because we didn't have Google Earth to find them or perhaps because it was too much effort when you're that age and there are other distractions. 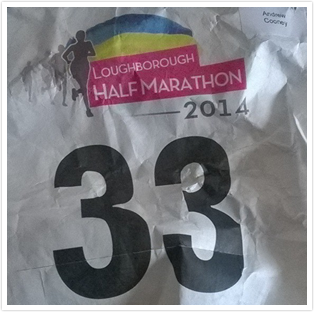 The race is on a largely out and back route with some variations from the centre of town up through the University and to Shepshed and Hathern.  There didn't seem that many people at the start - it was pretty cold so maybe they were all huddled somewhere - but it looks like 800+ finished. Still a pretty small field I thought for the size of the place and catchment area. It's not bad value as races go these days either at Â£20 (Â£22 if not affiliated) for a chip-timed run.  Maybe the sparse goodie bag (fine by me!) may have put people off to some extent. They don't post out numbers either which seems to becoming more common.  I don't know but my gut feel is that no-show rates for races in general are increasing and postage costs and non-returned chips are obvious ways of saving race costs.

I've picked my heaviest and most cushioned pair of shoes - a battered old pair of Saucony Ride 4 and I think this will be their last outing.  I had few aches of any significance from yesterday's marathon and when I jogged from the car to the start the remaining ones worked themselves out.  I ended up keeping the jacket and two other layers on throughout and was glad of them for the first half at least.

I wasn't going to push this at all hard so started about 2/3rds back in the field and set off extremely slowly and gradually gave it a little more gas as the race went on though never that hard.  Can afford to snap something now!

It's a varied course - plenty of short and sharp gradients, plenty of road and housing estates but also a fair amount of trail though almost all tarmac or compacted surface.  There was only a short section on grass/mud up a hill at about 9 miles and I wished there had been more of it.

From my vantage point mid pack I was surprised how many people were running with headphones.  I just don't get the point of that.  One minus point of the race as that the timing chip was held in a polythene bag attached to the back of the bib.  The design was frankly rubbish and they were falling off people throughout the race.  I shouted after a guy in front when his hit the deck but he only heard me - he certainly didn't hear the chip fall - after I'd had 3 goes at it with increasing volume and abruptness.  Ironically mine fell off 50 metres later and I had to go back and fish it out of the verge.  I'm not convinced the eventual 3rd lady heard a marshal tell her that she was 4th at that point as she too had the headgear on.

In the event it probably didn't matter too much whether you kept the timing chip or not as the timing system failed thanks to high winds (a new excuse on me!) and a lot of runners don't have chip times as a result. They also haven't posted age category results for the same reason but I can't immediately see how the two are related.  Didn't bother me but I suspect some were going for a fast time and that would have been disappointing to say the least.

Apart from that technical failure it's not a bad race and the course varies enough to be interesting while still allowing fast times so I'll probably have another go at it when not trying to pack in the miles quite so much.  I finished in 1:33 and bits but as with yesterday the time was irrelevant to me on this occasion.

It was great to catch up with Ainsina and Sam who won the baton relay with their team and picked up a massive trophy for their trouble!

Afterwards I finally managed to make it to Chocolate Alchemy in town, an artisan chocolatier run by elite athletes Lisa Dobriskey and Ricky Soos. The fact that elite athletes are making the stuff makes it ok to consume in vast quantities in my view!  The dark Belgian is amazing but I've yet to try everything I came away with so I may update that review but go try them out!

That rounds off a good 3 days of training.  Next weekend it's back to the ultra distances with the Oldham Way Ultra.  My last long one before the monster 100 miler with just the London Marathon to come before that batters me.

#Half Marathon,  #Trail Running,  #Training,  #Marathon
Comments
No comments yet.. why not be the first?
Most-read Posts