15th October, 2020
Breakfast at the Inveroan was as good as the dinner.  It dealt with the last vestiges of the whisky as me and the walkers chatted over our plans for the day.  Some were going to Kingshouse 10 miles away and others on to Kinlochleven which is 18 miles or so from the hotel.  I was heading for Fort William and had around 33 miles left to go.
I packed everything up and hit the road a little later than planned at 9:30.  The WHW is probably the easiest to navigate of all the trails I've run on and my day 3 was the easiest of all.  There's a gradual climb up onto and across Rannoch Moor on good surface all the way to Kingshouse.  The path is Telford's Parliamentary Road which starts off as rough cobbles - quite slippery in the light drizzle - and becomes more track later on.

The Parliamentary Road on Rannoch Moor
I power-walked the first 4 miles to let the breakfast sort itself out and spent the first hour or so catching up with the walkers group-by-group and it was a little sad that I'd not see them again.  It would have been good to swap trail stories when we'd all completed our journeys.

Rannoch Moor soon opens out into a vast space with munros in the distance and was absolutely spectacular.  Today was going to be by far the wettest but during the first half the rain kept its distance and the contrast between the sunny intervals picking out aspects of the landscape offset against the brooding  dark clouds on the horizon was so dramatic.
I started running and was surprised how well I was going along after a couple of long days out there.  I caught up to the last of my walker colleagues after 7 miles who was heading for Kinlochleven and we exchanged well wishes for the day and I pushed on towards Kingshouse. 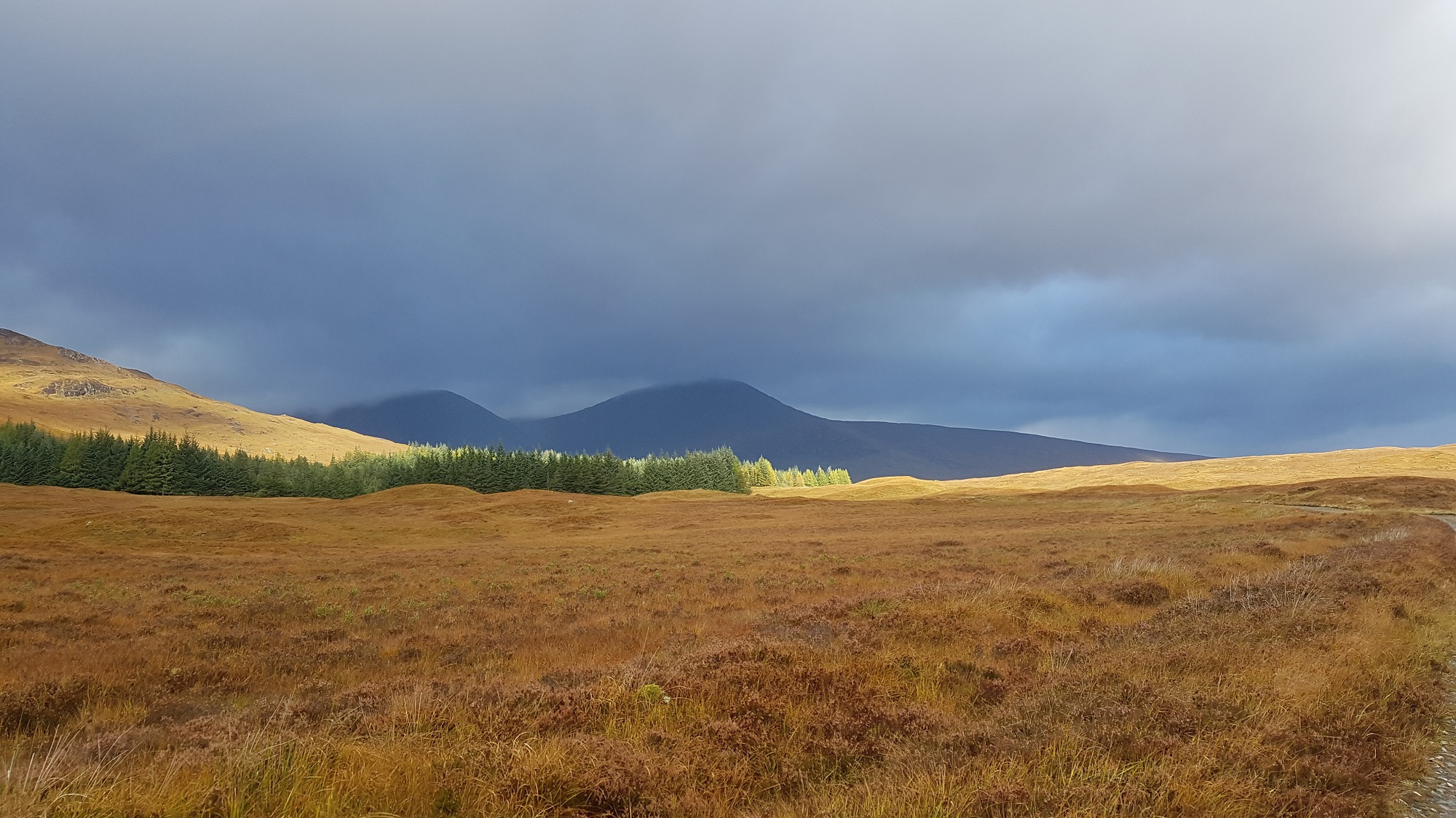 I've read the Moor can be very exposed and remote - I can certainly see that had the weather properly turned there would have been no respite from it.  The well-defined path and I suppose the fact that I was running it meant I never felt that cut off from civilisation.  In any event, the trail crosses the A82 which certainly detracts from the beauty of the place but prior to that it's a landscape that could enchant.  The colours were amazing. 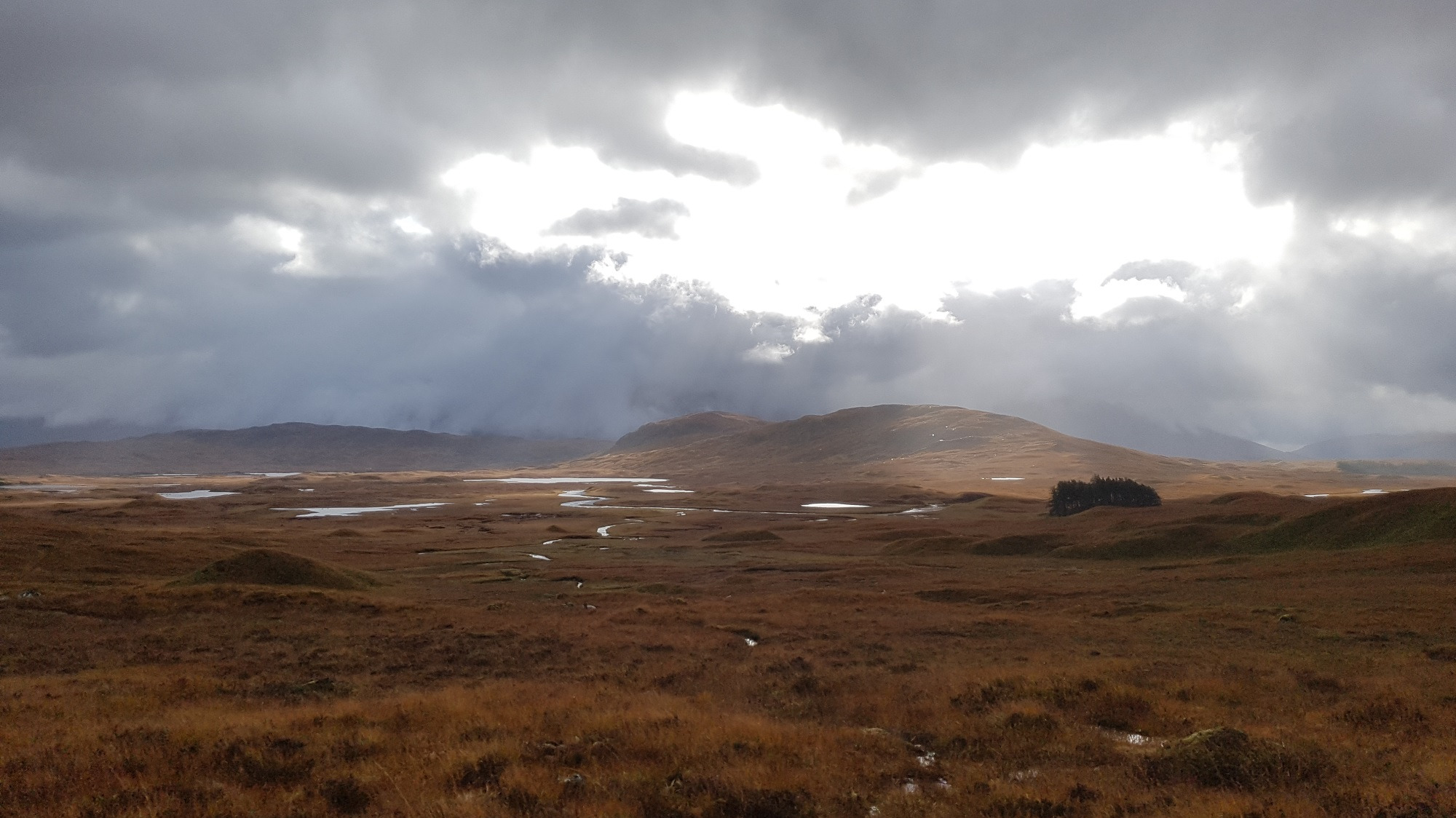 The next two kilometres run alongside the busy main road and with the weather starting to close in, I can't say they were a highlight.  But there's a turn to the right away from the road opposite the imposing 1021m Stob Dearg and towards the 'Devil's Staircase' up to the highest point along the whole route at 550m.
It's a bit of a grind of a climb but the path is easy and it zig-zags up the slope so it's by no means the worst and doesn't warrant any apprehension.  Apparently a few construction workers back in the day succumbed to the Winter weather after a post-work drinking session which gave the climb its name.  Is there any part of the country without a 'Devil's..' someting or other?  He seems to have very carelessly scattered his posessions.

The next 10 kilometres are all downhill on easy trail, past the hydro-electric scheme into Kinlochleven.  It's very runnable if a little steep nearer the town when you're right alongside the many water pipes running in parallel down the valley to feed the generators.
Kinlochleven is a substantial town and felt enormous have spent the last two and a half days barely seeing 3 buildings in one place.  I didn't need to stop so crossed the valley floor and back up the other side for the final leg into Fort William.
It's a steep climb and gains 200 metres - so once again, not the hardest or longest but it's an effort.  The rain had set in by now and the trail at the upper end of this ascent was awash. 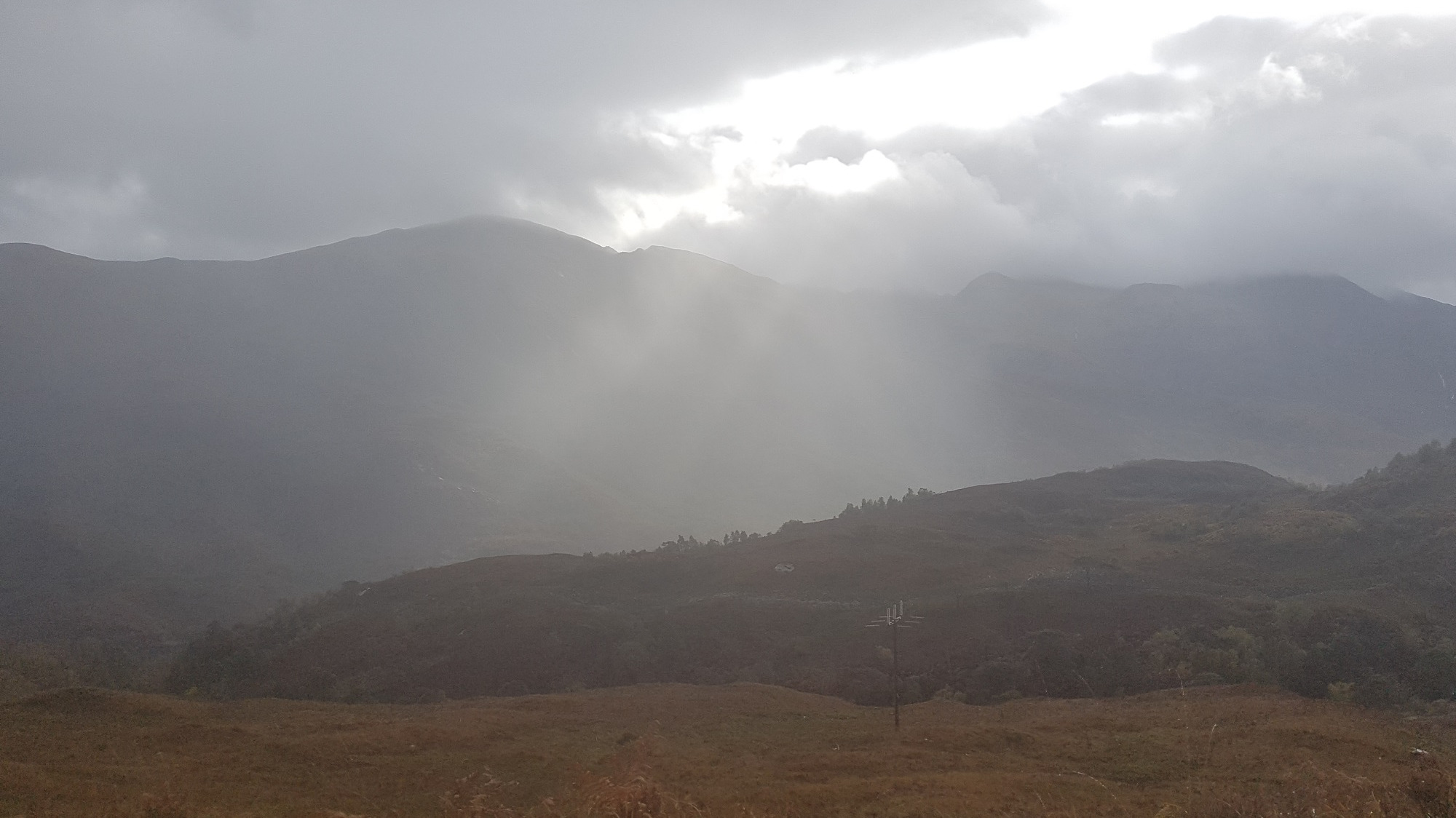 This is my one regret of the entire journey. Well, two if you count the rain fatally wounding my phone!  You're likely to get all sorts of weather running this trail - indeed you might never see the sun and get blown back to Glasgow so I can't complain as I had my fair share of good weather.  But the next 10 or more miles were in a total downpour. I don't mind getting wet or wading through the odd stream but by now the entire trail was several inches deep in water.
I've no doubt this leg is spectacular on a good day.  I passed the ruins at Tigh-na-sleubhaich and briefly thought about taking shelter but as there's no roof I don't think there would have been a fat lot of point!
I decided on taking the military road down into Fort William rather than continue on the trail - a decision I don't regret. There really wasn't anything to see and I was soaked through and getting cold.  A couple of miles along this very undulating road the rain stopped and the sun came out!  I wish I could have documented this because there were some fantastic views dropping down into Fort William and, rather like Rannoch Moor, the contrast was set on high but sadly the phone was dead.  They really are pretty weak things aren't they? If I'd dropped in it a burn, fair enough.
After another 51km since Inveroan, I arrive in Fort William.  I thought I'd get straight to the hotel (The Cruachan) and go and visit Sore Feet the day after but maybe fate had other ideas as, without the phone, I had no idea where the hotel was and despite it being almost right at the end of the road I came in on, I missed it and ended up in the town square anyway!
When I eventually found it, thanks to directions from someone sat next to Sore Feet and luxuriated in a warming shower it felt premature that the adventure was over.  I don't think 3 days was enough quite frankly.  I think it takes a good day and a half to forget about all the daily drudgery - especially in covid times - before you properly clear your head.  It wouldn't have been a completely mad scheme to carry on up the Great Glen way actually though it's an awkward length - short days if you run it over 3, long days over 2. 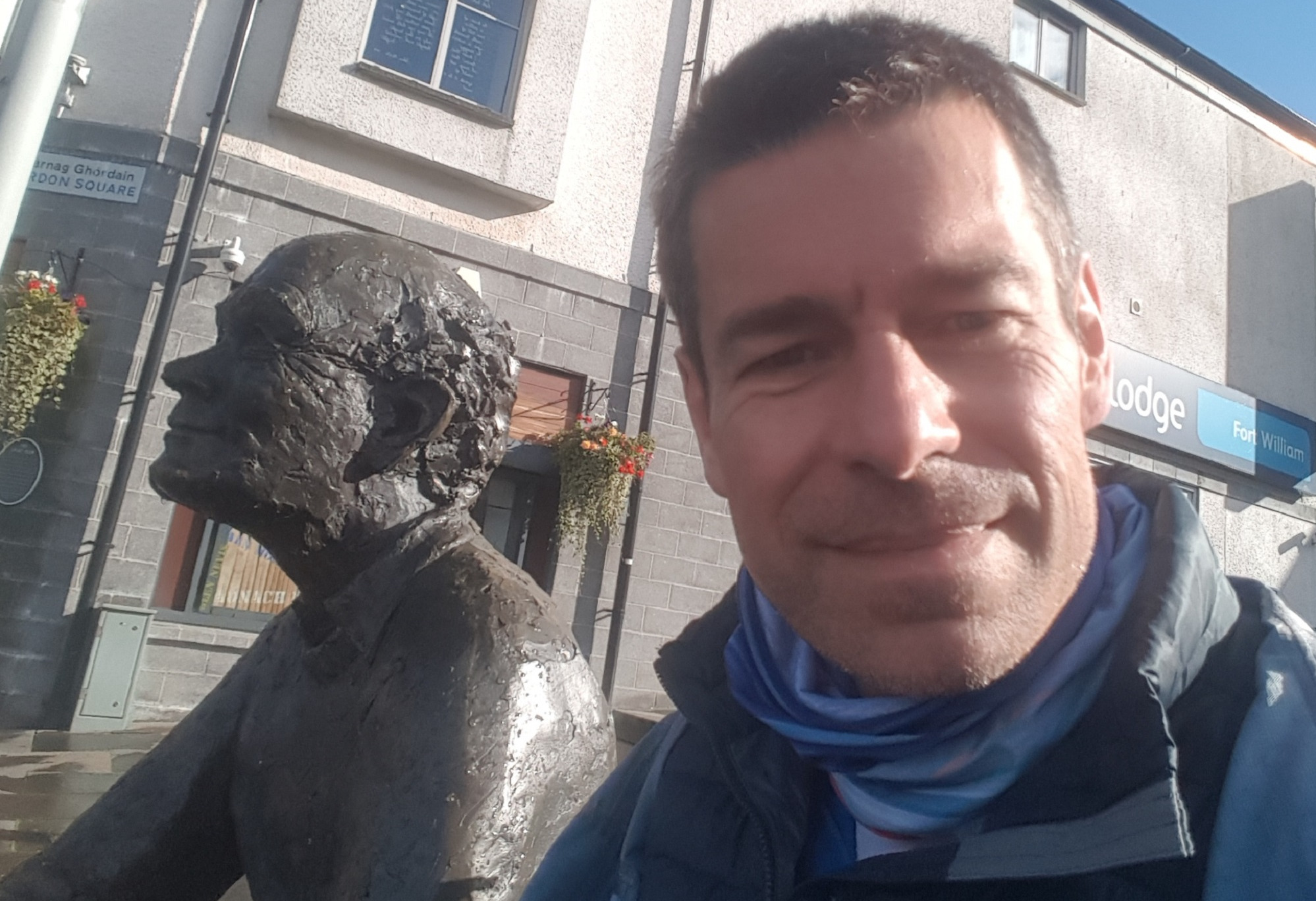 Sat next to Sore Feet
I managed to dry the phone out, though it now flattens the battery in 2 hours and heats up alarmingly so I am assuming that's the end of that!  But at least I could capture a few more shots.
I really enjoyed chatting to the walkers and sharing a beer and stories.  This is a lot of what these adventures are about.  If you're running then of course you necessarily exclude yourself from a lot of that but while travelling solo gives you time to think it can also be lonely at times.
It's been a great adventure - certainly what I needed and I'm already thinking about the next one.
If you're thinking of walking or running the trail then I very much recommend it.  It's not the most difficult, or the highest, or the least populated (in the main season anyway) but there are some sublime views and everyone I met from Glasgow to Fort William was very welcoming and friendly.
As a footnote, I travelled by train to Mallaig on the Thursday (I had considered the ferry over to Inverie and running back to Glenfinnan but the weather and timetables just got too complicated for that).  There aren't many ferries and there aren't many trains!
Mallaig is a very picturesque working harbour - and the odd shop.  There's a two-mile walking trail up the hills behind the town which I had time to complete while waiting for the return train after a coffee and cake.  The rail journey is the highlight really - it's the most beautiful rail line I've travelled on.  The views out of both sides of the train were amazing and you cross the Glenfinnan viaduct which unfortunately was obscured by the rain.  The trail runs along the viaduct and out to Inverie via Sourlies bothy and is about 26 miles in total.  One for another day!

#Bucket List,  #mountainrunning,  #Scenery,  #Travel,  #Ultra Marathon
Comments
No comments yet.. why not be the first?
Most-read Posts