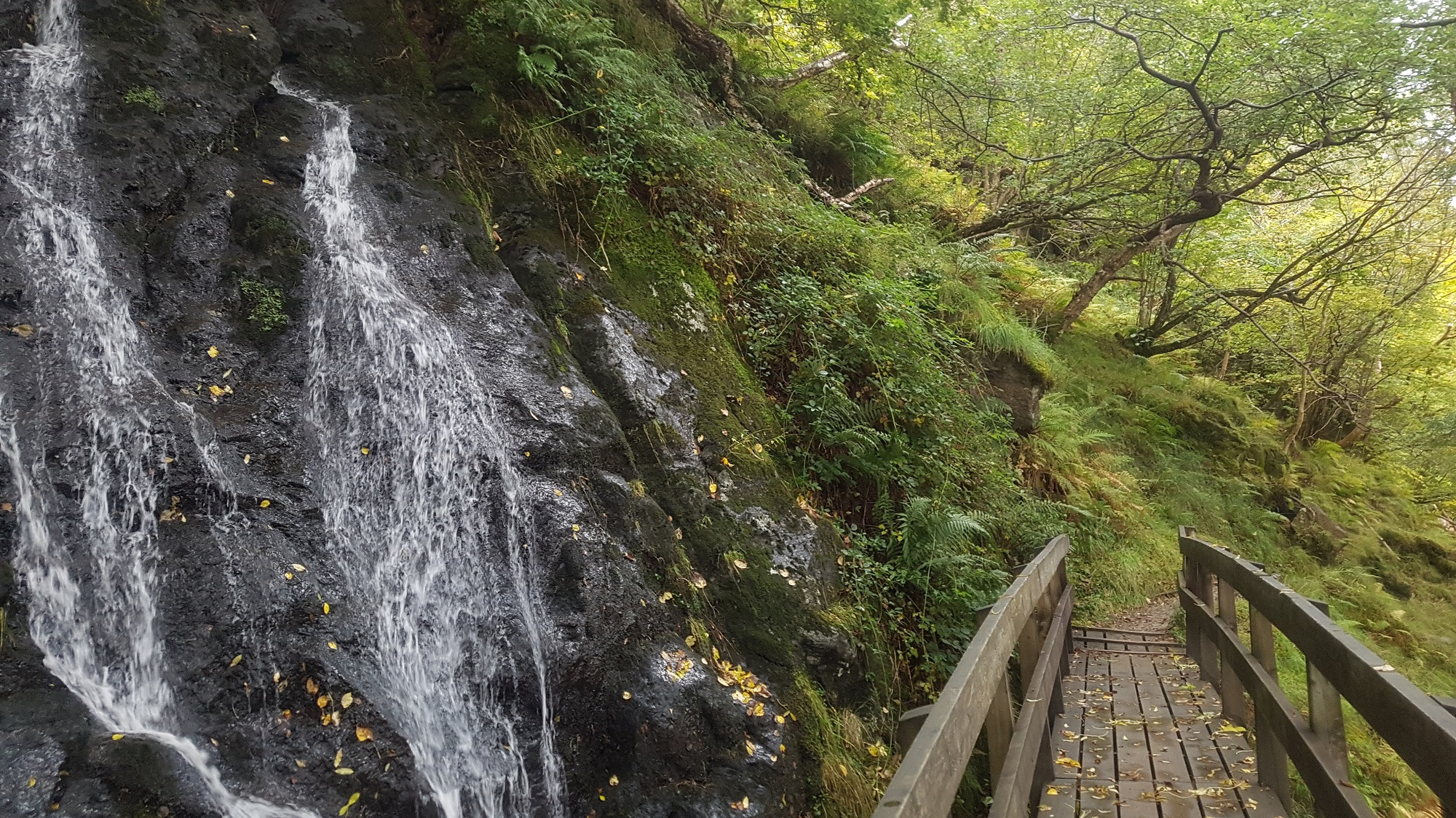 14th October, 2020
Day 2 broke with a comprehensive clag out on the low peak outside the B&B bedroom window though with a tiny patch of brilliant sun so I thought it could go either way today.  Spoiler alert, it wasn't the sunny one.
The one solid thing about the accommodation was the breakfast and the granola course would have done me on any normal day but I shoved in a toast course and a veggie fry-up course for good measure.  I thought that would last me for most of the day and I was still carrying a couple of nutella-filled bap things from the Ibis in case of the munchies as well as more packaged trail food.

I got about half a mile down the road and realised I'd not actually said goodbye and vagualy wondered if I'd paid but I wasn't about to retrace, especially as it's already spotting with rain.  Back past the Bunkhouse and down to the trail there was around 5-6 miles left of Loch Lomond and the most technical bit of the route so far. 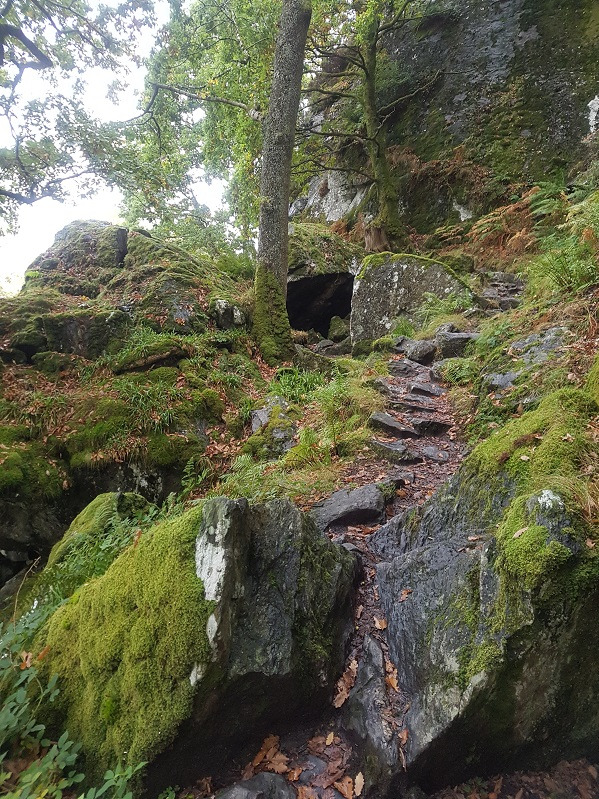 I quite enjoyed it I have to say.  Flat path gets pretty dull fast but this was very much not that.  I was carrying around 5-6kgs on my back but I felt for those lugging 20kgs and walking it.  So easy to overbalanace I'd have thought.  My sense of balance being especially poor.   I passed a few and exchanged a few cheery words with each.
Where are you aiming for today? I said to one.  'Tyburn' he said.  I assume that was Tyndrum and not the preferred spot for seeing off your traitors and witches in Mediaeval days in London.  Otherwise he was in for quite a walk.  'Know any good camping spots?' He asked and I once again felt something of a plastic WHW fan when admitting I was hoping for a proper bed and a feed.
It was one day two that I noticed I was too concerned about pace and times to be getting the most out of this trail.  The Walkers have it right I think.  They don't seem to care about all that and proceed sedately but I suspected taking in more at the same time.  I wasn't exactly racing of course but the long day yesterday did have me obsessing a little overmuch with where would I be by lunch.  I resolved to not look at the watch at all, though it vibrates every kilometre so qualified that by determining to avoid it for at least 10 buzzes.
Lots of scrambles followed, rocky staircases, rooty clambers and the like and again I was thankful I wasn't lugging a much bigger pack.   It took 2 hours in the event to cover the 8 miles from the B&B to the end of Loch Lomond and Beinglas Farm.  I'm starting to obsess about times again aren't it? 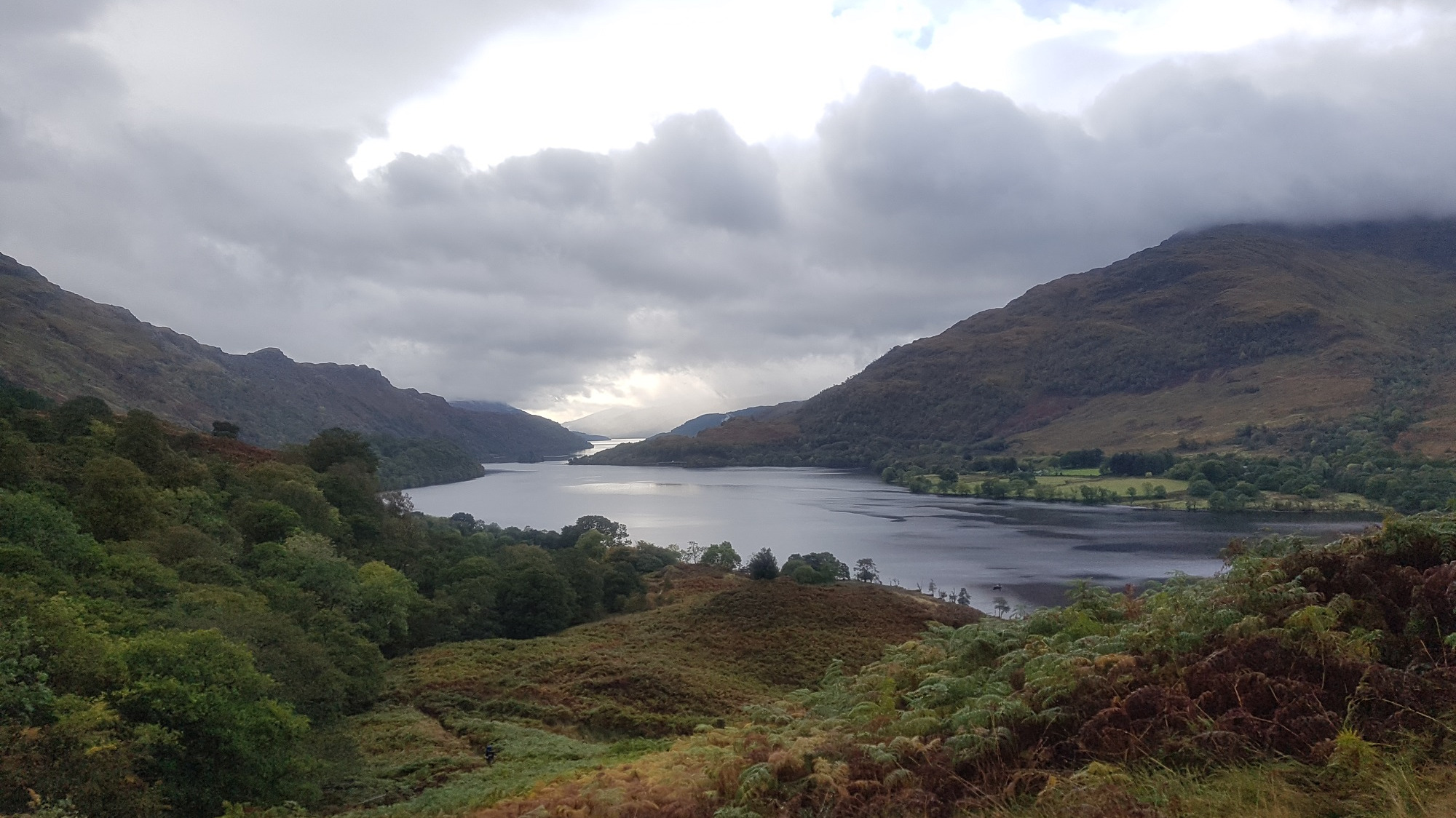 Last look back over Loch Lomond 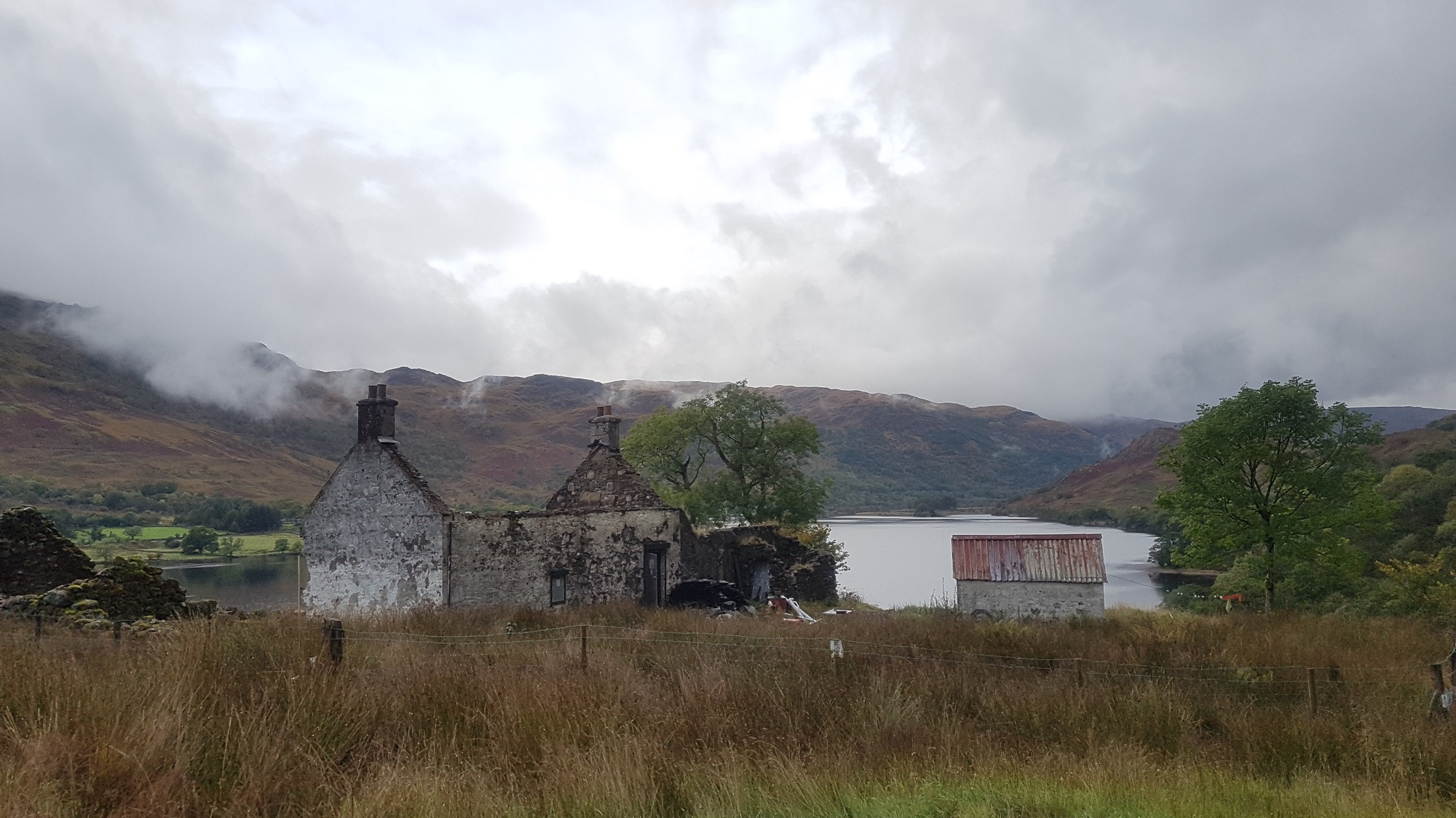 The farm is a popular stop on the Way and looked pretty sophistcated though pretty quiet as I passed through it.  I guess that day's wave of campers had already upped sticks and moved on and the new lot were behind me.  Underfoot it's much easier now and just as well because the rain has started up.  The only fly in that otherwise smooth gravelly ointment being a detour up a very boggy and muddy hillside to avoid a missing bridge over a tributary.  I managed to dip both legs up the shins in liquid slurry, but I've since watched enough Joy of Painting with Bob Ross, I know this wasn't a mistake but a happy accident. 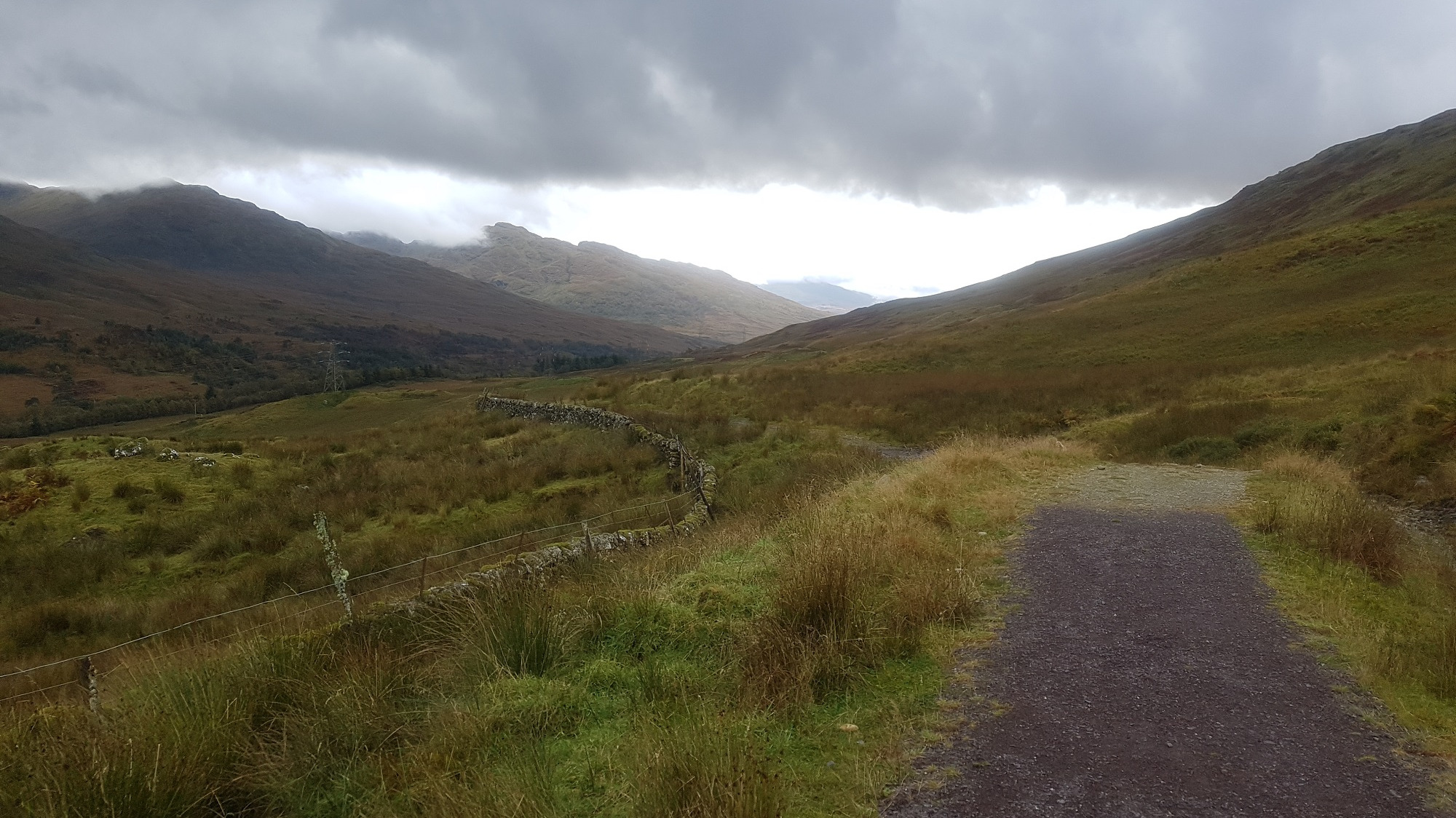 I hardly saw anybody past this stretch - fellow travellers became ever more sparsely separated as the days went on.  It would have felt remote but for the road running parallel to the Way but there were few vehicles and I forgot it was there for the mostpart.  Eventually you do have to cross it, by way of a very low tunnel designed more for livestock I would have said, and once again I was grateful for the absence of a monster backpack.
The trail climbs pretty gently through the valley, winding through the foothills of several 1000m+ mountains but as with Day 1, never gains any significant altitude.  It would peak out at just 340m today just past the Crianlarich Crossroads.  There is the promise of food and a pint and various other attractions in Crianlarich but, having polished off the two now somewhat stale nutella cobs pinched from the Ibis breakfast bar two days earlier I decided I had everything I needed.   Besides, it's a little way off the trail and so I managed to quash those rumours and actually pass a pub!
From here to Tyndrum there's some nice undulating running through forestry and then more open countryside past Auchtertyre Farm which looks like another decent spot to pitch up.  Apparently there's an 8th Century graveyard around here but unfortunately I completely missed it!  I did see a very austere monument to Tyndrum's lead mining past which stands out on a barren patch of land - not the sort of thing you'd make a day-trip out to see.  I've since read it's barren because the lead works have poisoned the land and nothing will grow.  So that's nice.
The Way passes by the main centre of Tyndrum but does emerge right by Brodie's Mini Market which has gone out of its way to make sure you understand this is the last shop before Kinlochleven.  If you're walking it, that's some distance ahead so the warning is timely.  I called in for an ice lolly and a coke and had a quick chat with the friendly owner who assured me that - yes - I'd passed the worst of it!  I was beginning to think the worst of it must be working out how to pronounce Milngavie without sounding like a colossal tourist. 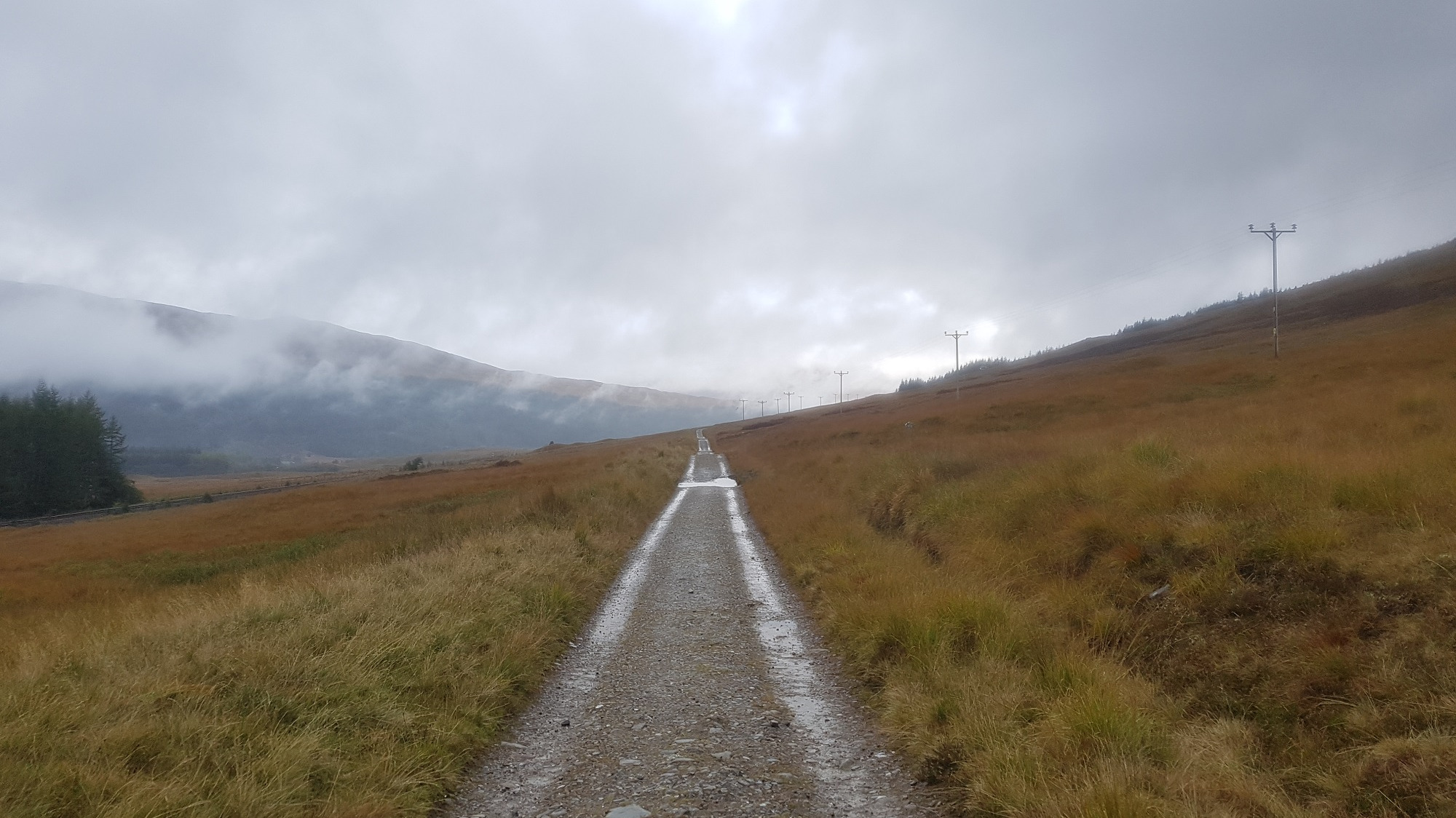 Tyndrum to the Bridge Of Orchy
Once more, there's 9 miles to go but this time it's pretty straightforward all the way to the Bridge of Orchy.  I'm sure in better weather this path is more impressive but under cloud it wasn't too much elevated from a farm track with a dual carriageway below it.  On a clear day you have the 901m Beinn Odhar and the 1076m Beinn Dorain mountains which look pretty impressive on others' photos but of them there was little sign in the murk.
It took a while to reach the Bridge of Orchy  and I was pretty knackered.  There's a road leading round directly to the Inveroan Hotel versus the trail and I was tempted to take it. But something told me to do the job properly.  It got steep, started to rain heavily and I suddenly realised I was extremely hungry and wished I'd picked the road but then was treated to one more great view off the top over Loch Tulla.  The photo doesn't really do it justice. 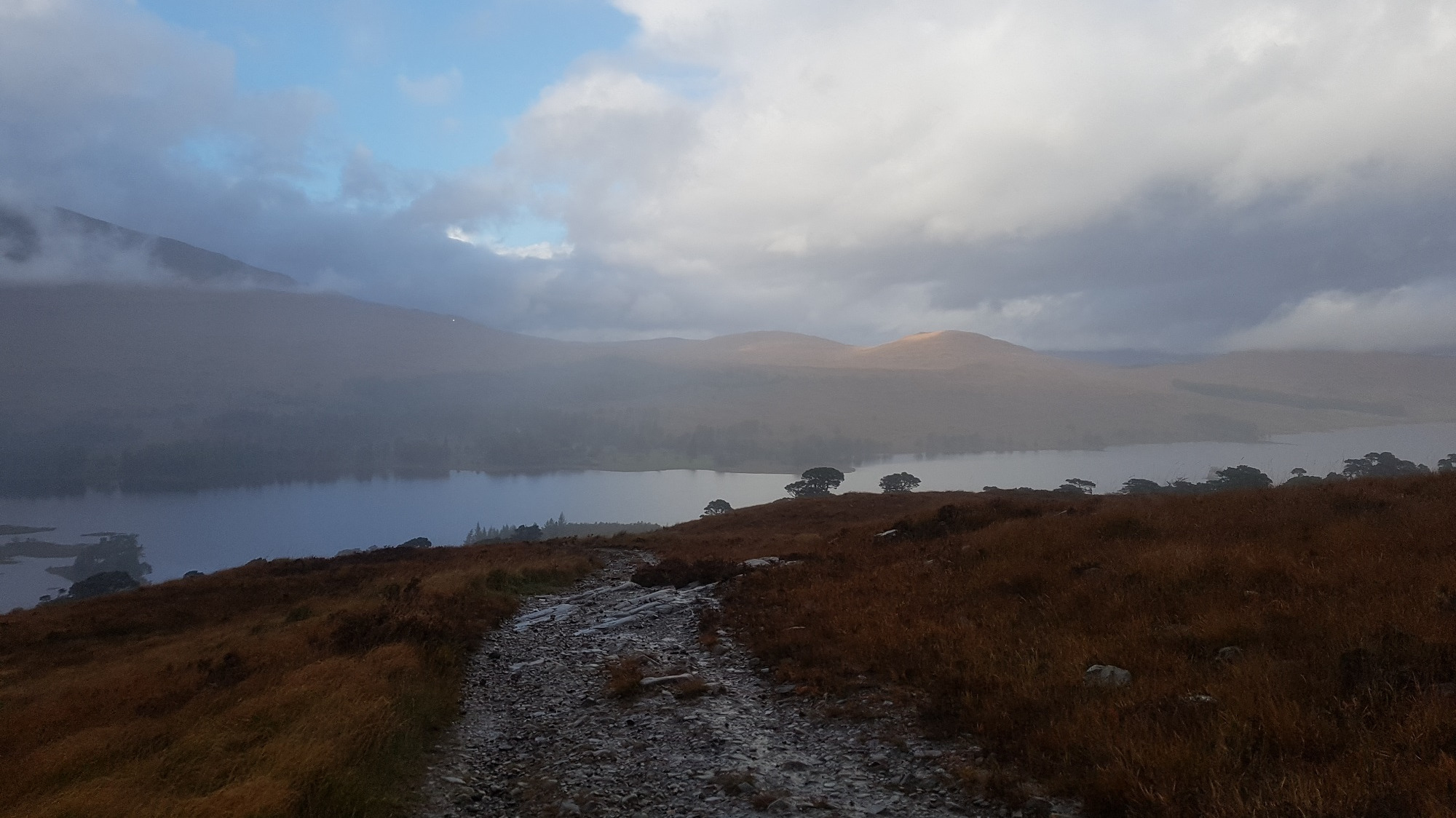 Loch Tulla
I thought they must have live music on at the hotel but it turned out to be some sort of rap battle between a bunch of cows and some deer.  The strangest effect.
So here's another recommendation - the Inveroan Hotel is fantastic.  I mentioned something about being hungry and was presented with the largest portion of gnocchi arrabiata (with sprig of some green plant stuff) I have ever seen.  It would have fed 3.  Of course I had to make a decent stab at it.  Sending back 3/4 of it wouldn't have gone down well so I plugged on Mr Creosote style until with some discrete secreting of some stragglers under the cutlery I thought I'd get away with it.
The place was full of folks walking the trail and we all got chatting like we'd known each other forever.  Most of us retired to the bar for a beer. And then a whisky. And then a whisky chaser and had it not been for Covid rules, we'd have found something to chase that with as well.  A really fun night.
Another 48km down and one more day to go!

Next day -> Inveroan to Fort WIlliam
#Bucket List,  #Scenery,  #Travel,  #Ultra Marathon,  #westhighlandway
Comments
No comments yet.. why not be the first?
Most-read Posts