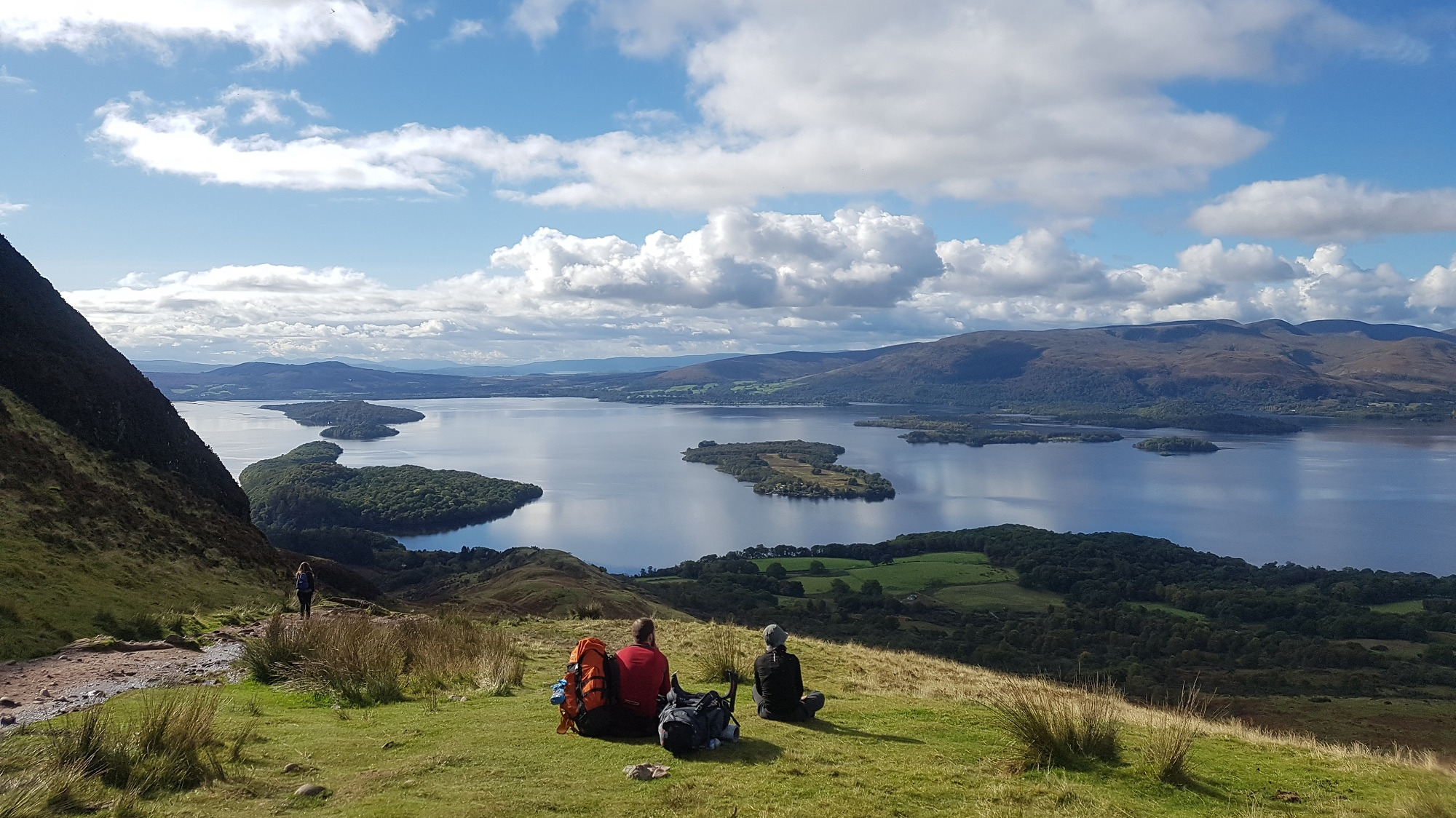 13th October, 2020
With COVID raging and at the time of writing no prospect of it reigning in its raging any time soon a getaway or if you like a forgetaway was in order.  I'd toyed with a route around Knoydart - bits of the Cape Wrath course - and then the Great Glen Way, both of which obviously meant the immediate purchase of maps and despite rejecting both in the end, no map is ever wasted.  You can't have too many maps.  And they will both be pressed into service one day. 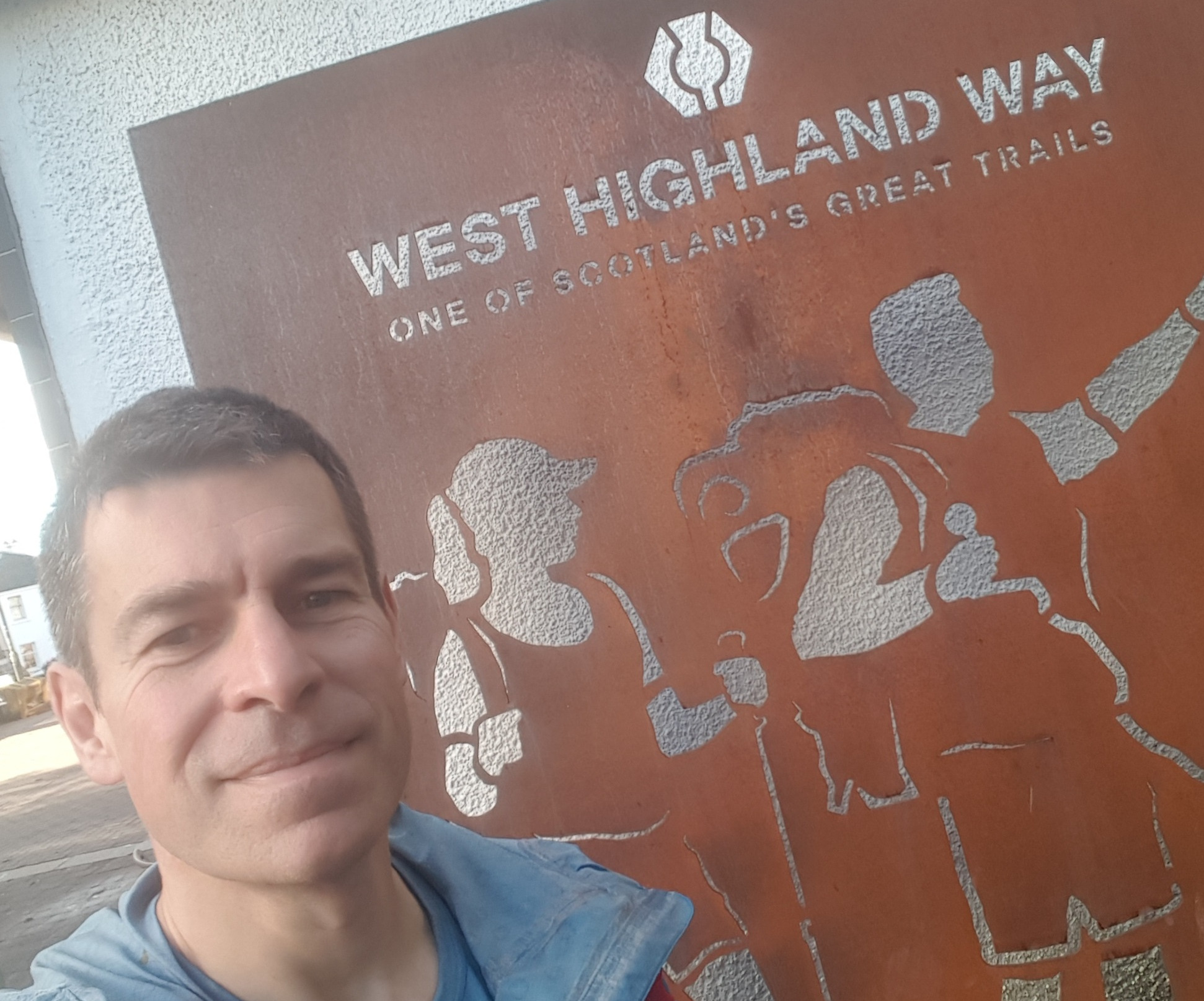 The West Highland Way is the most well-trodden route in Scotland but not, as yet, by me.  Walkers cover the 97 miles in 5-8 days typically but I thought as long as I could travel light, 3 days would be a decent challenge without being completely nuts.
I'd considered wild camping and spent a solid week researching the lightest tent available to man and, in the few moments between mainlining tent unpacking YouTube videos, the lightest sleeping bag, stove, mat.. and, oh, the seemingly endless list of stuff you need when you don't get someone else to provide a bed and cook breakfast for you.
Then I thought, hey - why not get someone else to provide a bed and make breakfast for me?!
So, while feeling like I've almost cheated somehow, the full camping experience will have to wait until next time.
There's not a huge amount of non-campsite accommodation along the way, especially since the Inversnaid Hotel shut, but I found a place off the trail from there for the first night and another in Inveroan right on the trail for the second.
I caught the train up to Glasgow on Sunday 4th October from Slough and, the morning after, another to the trailhead at Milngavie after a decent night in the Ibis Styles (200 metres from Glasgow Central, brand new, spotless, great staff, cheap, good food and a bar - recommended!)

I've been warned that day 1 starts off in pretty dull fashion and I guess they're right.  But I like this about the WHW.  It just keeps getting better.
They also tell me it's extremely well waymarked and apart from embarassingly making a meal of finding the trailhead from the station I can certainly vouch for that.  It's almost impossible to get lost!
It's always a bit of a struggle to get going; the pack seems to weigh several hundred kilos until you get used to it and the route out through the pleasant gardens in Milngavie has some (small!) climbs in it.  But, defying expectations, the sun is out and would stay out and it's the perfect day for running!
Past the Mugdock country park and you're out in the countryside and it feels like the journey has properly begun. 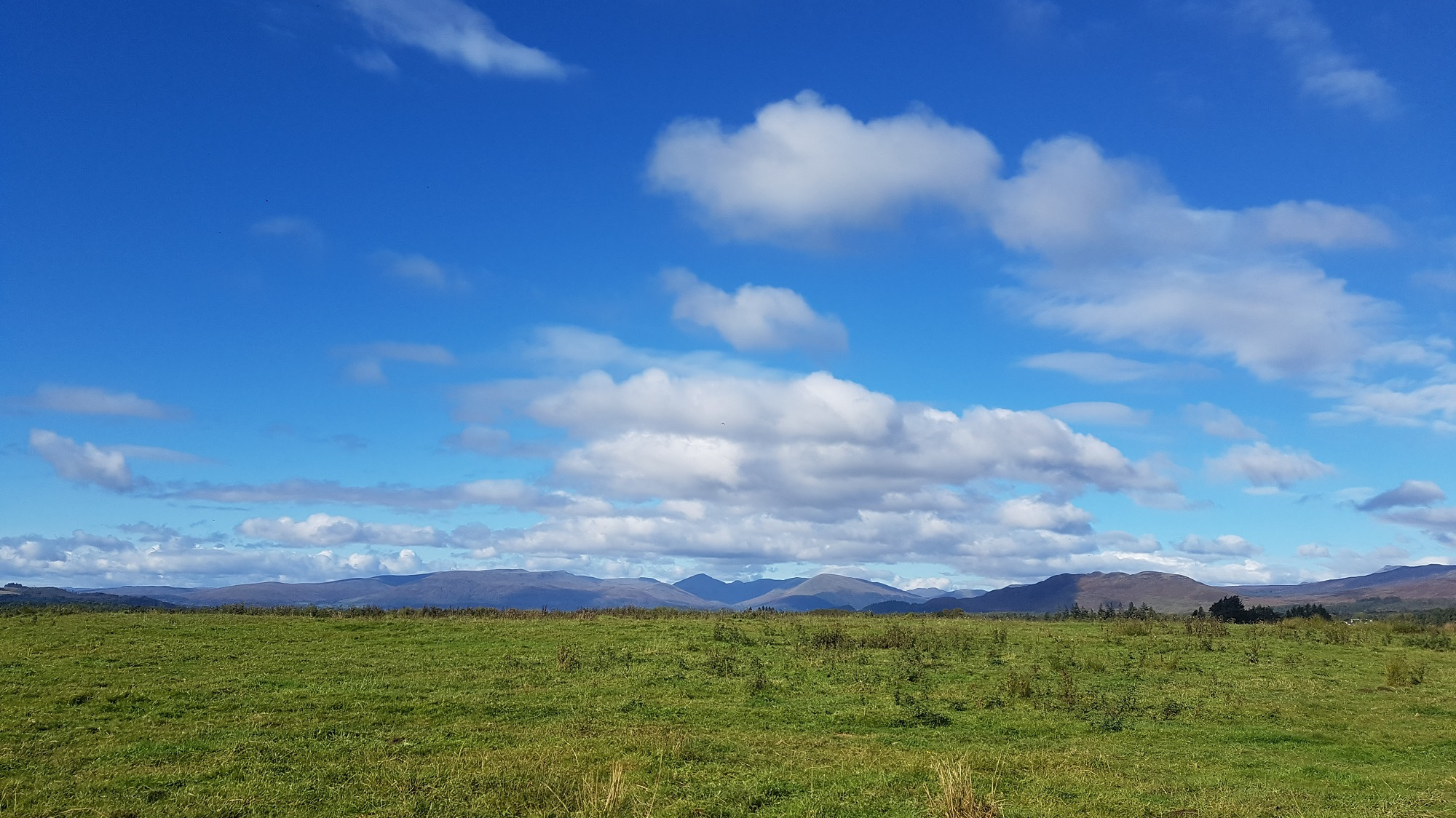 It's easy running - very flat for the first 20km in fact all the way to Drymen - a distant background of low munros hinting at more dramatic landscapes to come but beautifully lit in the morning sun.  Sporadic groups of walkers came and went - I noticed somehow they got friendlier as the days went by.  Not that these on day 1 weren't friendly - far from it - but maybe it takes a few miles to forget the daily grind and take in the spirit of the adventure?
I found my first (and last - I suspect due to my inattention!) honesty box in the attractive tiny hamlet of Gartness - a small row of cottages next to an attractive stream.  Bring some small change when you do the trail, folks!  The fridge held drinks and chocolate and you just help yourself and leave the change.  Very handy if you need an emergency sugar hit!
The road through Gartness also featured my first and last midges.  Fortunately October is right at the end of the midge season and I'd decided not to bring any chemical defences.  It's like being stabbed by tiny pins.  I cannot imagine how terrible they must be when they're swarming in clouds.

Conic Hill and Loch Lomond
After some quiet roads, the WHW heads into a forest and starts the climb up to Conic Hill.  This really felt like the start of the trail proper.  At the time I hadn't realised the hill was just ahead or that I was about to be treated to a spectacular view across Loch Lomond; it keeps it a secret until you round the contour and emerge onto the North side of the slope.  Absolutely breathtaking in the bright sun and I could have sat there and stared at it for hours.  There's an alternative trail that avoids the climb and presumably all the views so I strongly suggest sticking to the official WHW unless you're extremely unlucky with the weather.
The trail drops into Balmaha down a loose, rocky path and then a steep staircase which I shared with by far the biggest concentration of other human beings I'd see all three days.  Balmaha sits right on the lochside and I felt like taking a minute or two so I found an ice cream shop and watched the world go by. 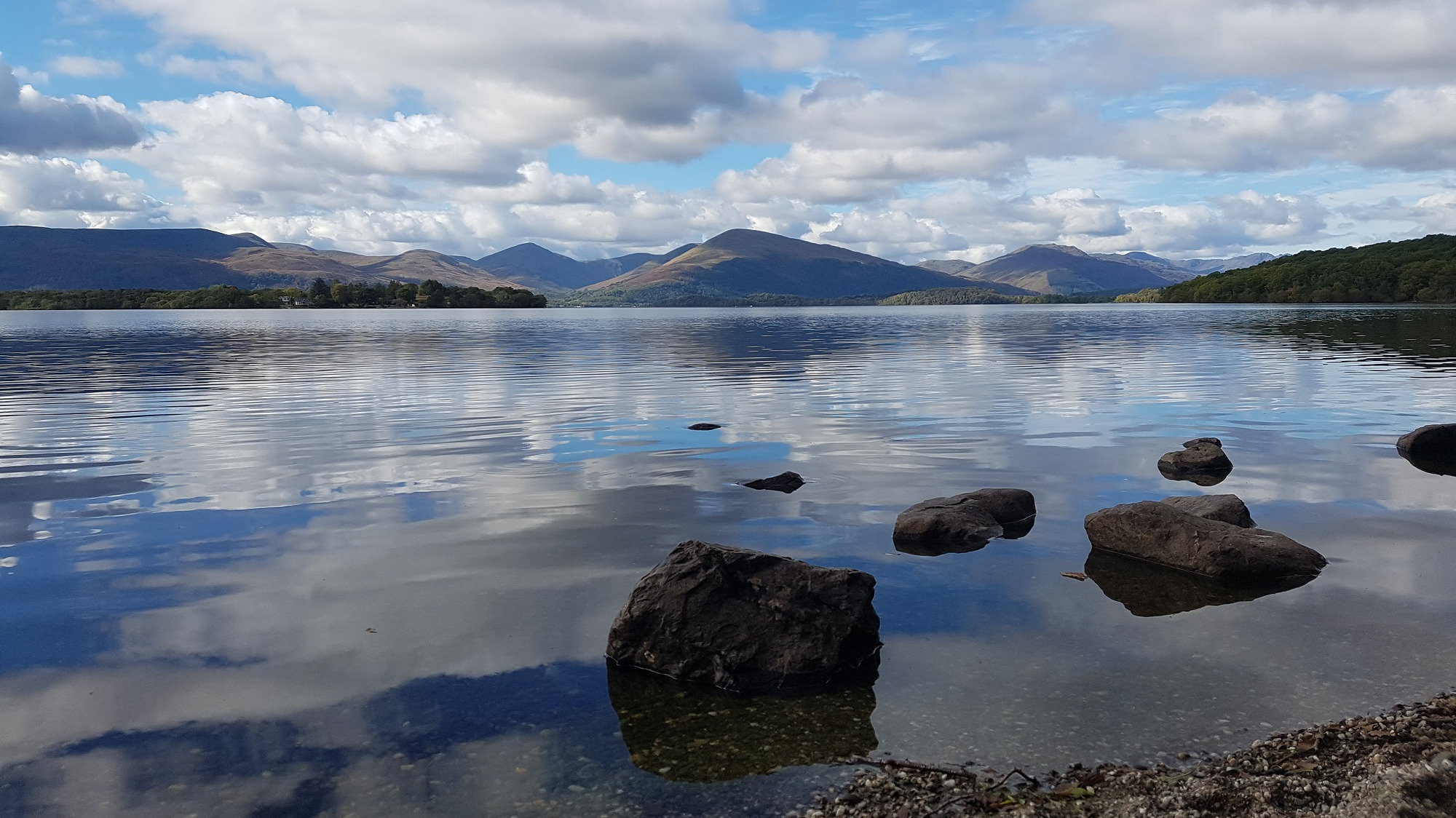 Loch Lomond
Loch Lomond is the largest lake in Great Britain and is over 22 miles long.  I'd spend the rest of the day and several hours of tomorrow running the trail alongside its Eastern shore.  It's a lovely route and almost flat for 10 miles (barring one steep climb up to a viewpoint) though it's somehow more tiring than it looks.  Flat on paper but it constantly rises and falls though the surface is easy and every so often there is a clearing in the treeline on the lochside and you're treated to sublime views over the millpond-smooth water.
Ben Lomond towers above to the East though I couldn't see it from the trail.  I'd considered summiting and going directly from there cross-country to Loch Arklet where I was spending the night.  From the summit there is no defined path to the Loch and by the looks of it a lot of boggy ground - being as Storm Alex had just passed overhead I thought better of it.  Looking at the other end of the trail from the Loch later I decided that had been a good decision.  I'd probably still be up there now. 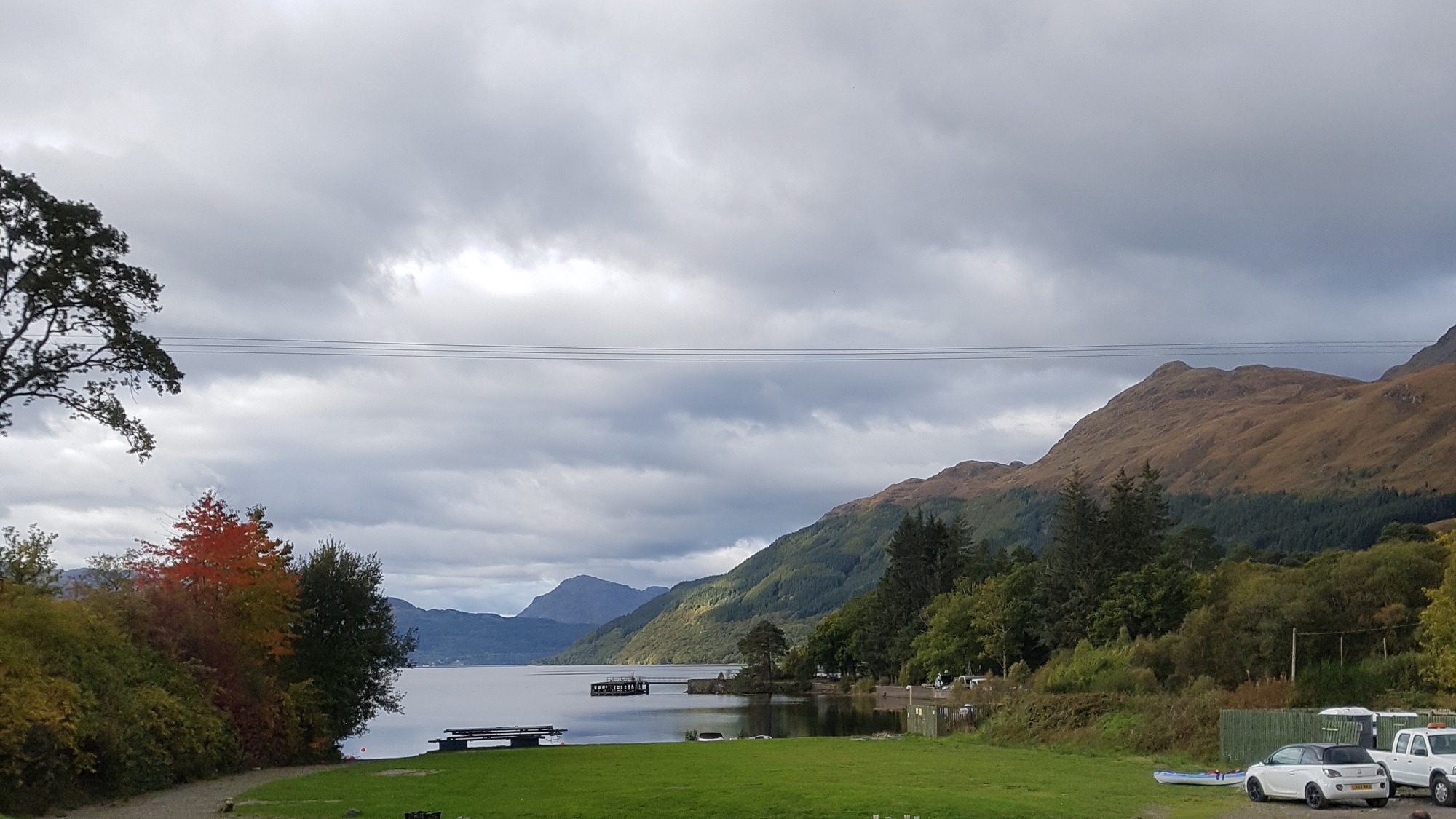 The Clansman - 9 miles to go
I had one more refreshment stop at Rowardenan at the Clansman Bar - a pint of shandy which didn't touch the sides.  I still had 9 miles to go, the sun had clouded over and, at 4pm, there wasn't a huge amount of daylight left.  I coaxed the rusty joints into getting going once more and none too soon as I'd chilled down a lot since stopping.
You have another option with the trail here.. the upper or lower path with the latter continuing alongside the loch.  I decided to go with the upper trail because it looked like a decent surface (I'd read the lower is more technical) and was conscious of the time.  I probably missed out on some views by doing so but I'd seen quite a lot of the Loch already and the sun had gone which certainly took the edge off the majesty of the place.  The upper trail climbs quite steeply and at the end of a long day is quite hard work.  I was counting down the kilometres to go at this point.  There's a fair amount of scratchy surface, especially just after the lower trail rejoins the upper.
At a spectacular waterfall at the closed Inversnaid hotel, I'd reached the end of the WHW for Day 1 but still had a mile and a half climb up the road to the Bunkhouse for dinner and a pint (NB - many venues have stopped serving evening meals with the Covid situation, not least the B&B I booked for night 1 so ensure you double-check everything before you find yourself stuck!).
I wished I'd stayed at the bunkhouse actually.  It was half the price of the B&B half a mile further up the road and looked far better in every other respect too.
I arrived in the dark, cold and wet only to find a very cold room and even colder bathroom.  The heating was a small electric heater of the 'do not cover' variety so having travel-washed the socks and shorts I strung up a Heath Robinson chain of coathangers dangling over a rather pointless tall uplighter thing above it to try and dry everything without causing a fire.
Day One complete!
58km done, which was the longest day of the three.  It had taken about 7.5hours of moving time and I have to admit was harder than I'd expected.  Basically because what looked flat on paper was actually much more energy-sapping.  I thought day one would be the easy day but the B&B fella said the worst was over.  In fact everybody would say that throughout the journey. One of them had to be right!
For all that I felt pretty good and had been lucky to see some sublime sights and was looking forward to pressing on the next day!