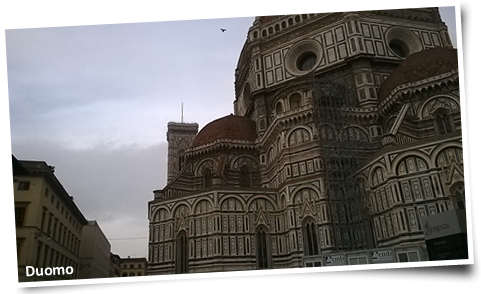 Leicester Half MarathonCountry to Capital Ultra - the rematch
share this story 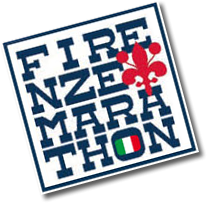 My Autumn marathon was intended to be Berlin but having run a whole bunch of ultras earlier in the year, not least 70 miles at Thunder Run, it was impossible to fit enough speedwork in to make a decent go of it.  I'd not paid the hotel bill and even half the flight cost was refundable and with basic maths working out that Florence could be paid for with the refund that became plan B.

I've run Berlin twice before and both times it had been hot so I told myself I wasn't missing much by not going only to find it's blessed with perfect conditions!  Life is hard.  I've entered again next year so no doubt the heatwave will be back. And maybe it'll rain frogs.

So.. Florence!  I've run this before too, in 2010 though they keep tinkering with the course and it's slightly different.  Last time it was absolutely freezing and chucking it down for good measure and I had a pretty miserable time out there despite running past some of the World's finest architecture.  But incredibly we're looking at 16 degrees!

Second surprise, the hotel (San Niccolo) I'd booked for buttons (and three nights) turned out to be an apartment with a kitchen and better still was about 4.7cm from the start line.  I must have been looking at an old course map - I was convinced it was more like a mile away.  Anyway - big bonus - and an alarm clock proved superfluous too as the PA kicked off early and rattled the towel rail in the bathroom with, of all things, a Bob Marley medley (what is the attraction of the man exactly?) and Billy Ocean's great marathon running track - Carbo Loading Queen.

As usual I somehow contrive to be almost late, at least for the official start time.  However this is one of the few gripes about the race I have - it's at the mercy of the TV schedule.  I can't grasp how a network doesn't know when it's going to show the race but in any event we're held up 30 minutes; time I'd have cheerfully added on to the fitful sleep.

Outside of Italy the race has a low profile for some reason though there are 10,000 on the startline, the vast majority Italian wearing the same brands as you but in somehow cooler colours.  I only heard one English speaker - a dude from Australia - but we're not here for a chat right?  They've tightened up access to the start pens which was good to see as it was just a free for all last time.

So eventually the race is put under starters orders.  I'm feeling very lumpen and immobile - probably the minor bug thing that's been hanging around for a couple of weeks but not doing much.  Yesterday's headache had gone so I hoped it had too but unfortunately not.  As the gun goes I immediately know it's going to be a tough day as nothing is moving right and despite pretty much jogging the first mile and a half it's not getting any easier.  I thought I'd just press on and see what happened.

It's a flat course.. the only undulations are underpasses and bridges and there aren't many of those.  It is pretty twisty - the first 15k through the park is bent round on itselt like a paperclip.  I like this stretch; the air is cool and it's a good surface lined with trees.

I was going ok time-wise - I'd thought I could get into the mid 2:40s and was on pace for that but it was a struggle to maintain and felt a lot harder than it should have done. I stopped briefly a few times to see what the pulse rate was doing mainly and a stretch about 10 miles in to try and get the thighs to come to life a bit more but can't say it helped much.  The hotel was on the course at the halfway point as well as the start so there was an incentive to push on til then and see how things were.

The crowds are out in force up the incline to Porta Romana and, less welcome, so are a lot of cyclists.  There's a hairpin turn at the top of the slope and, via a different road, a return to the South bank of the Arno with it's stunning views.  It's such a beautiful city.

So at halfway I was back at the hotel and helped myself to another few minutes of pause while I considered my immediate future. The voice in my head, realising it was losing the argument to chuck in the towel, suggested another option of dressing up quitting in tinsel by picking up my phone from the apartment and taking photos for the second half but I was having none of it.

This is where running a load of ultras comes in especially handy.  When you've got to halfway in a marathon your ultrarunner will consider what remains 'only 13 miles', inconceivable that these should pose any problem.

So I pressed on. It's a less inspiring section of the course this - kind of like Docklands used to be before they built much and there were no spectators. It could be anywhere.  An ugly railway station and a stadium and that's about all I remember. It twists here too but I don't mind that.  Long straights seem to take forever (New York's 1st Avenue!) and the turns here are always far enough up ahead that they give something to aim at.  We're working in km too so the next distance marker is never too far away.  The dull bit ends with the only 'hill' - the bridge over the railway line - practically a hemisphere but not long.

I had a quick pause here for a stretch to relieve a niggling calf.  The 3 hour bus passed me and I ended up tagging along with them for a bit.  What a fantastic job these pacers do (though I'm not sure they made the time here).  We passed the sobering scene of a lot of paramedics holding up a screen of the sort you see when a horse fails to make Beeches and I hope whoever was getting the benefit of both came out of it ok.

The course saves the best stuff scenery-wise for the end and tours the Duomo winding through the narrow, cobbled streets before crossing the Arno once more purely for the money shot of crossing back across the Ponte Vecchio with 3km to go. 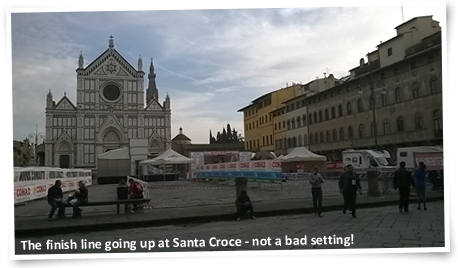 The crowds are big here and they're all shouting 'Avi' and, less encouraging to the non-Italian ear 'Dai' (which apparently means 'come on').  I felt (at last) strong(ish) for the last few km and came on, if only to ensure a sub 3 finish. There was yet another flyby of the hotel - far too late in the race to be a temptation now - and a km along the Arno before turning for the last couple of hundred metres to the spectacular finish in front of Sante Croce.

I finished a shade under 2:59 - not what I was looking for but to be honest, it's been a long year full of amazing races and this was never going to trouble the PB.  I'll save that for Berlin next year.

Florence puts on a great race.  It's cheap to get to, it's cheap to stay here (the race is out of tourist season) and with early bird entry, even the race is cheap.  There are drinks and all sorts of food every 5km and sponge stations in between - more than adequate on that score.

For those that go for this sort of thing the pre-race goodies are a decent long sleeve tech shirt (purple!), a few comestibles that didn't survive the expo and a handy arm pocket thing which held my room key during the race, plus some other odds and sods.

Well worth adding to your list in short.  This is of course a city you'll want to spend time exploring and where better to combine a race with exploring streets Leonardo Da Vinci walked and would still recognise?

#Florence Marathon,  #Marathon
Comments
No comments yet.. why not be the first?
Most-read Posts