21st April, 2013
This is the year is the year that reaffirmed my belief that London is the greatest marathon in the World.

In this, my Comrades debut year, I had originally planned to race London as part of my build up; aiming for a p.b.  Having started packing each week with long runs from November 2012 and battering myself into the floor with them I came to my senses and decided that was not an option. 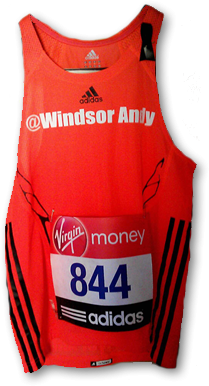 For one thing it would have meant a 2-week taper beforehand and an all-out effort would have knocked out at least the following week post-race as well.  In the past I've also discovered to my cost that doing well in a lesser race can cause you to lose focus on your main goal.  One year I ran the Robin Hood Half in a 3-minute p.b. and was so happy with that I mentally thought 'job done' and switched off almost completely.

I'd normally run 5-6 20+ milers in the build up to a marathon.  Having run London I've now packed in 14 plus 2 tough Ultras of 34 and 44 miles.  They do interesting things to your body with stresses manifesting themselves days or weeks later rather like a bruise appearing elsewhere downstream from the site of the injury that caused it.

I had booked a hotel for the first time ever. Normally I take the Club bus in from Windsor.  The journey itself is pleasant enough but it leaves at 6:30am sharp which means a very early start.  As the race starts at 10am you have two fundamental issues - when to eat and getting to the bog!

Being in London the night before afforded the chance to catch up with a large group - 26 people - all from Twitter.  Most from a similar pre-race pasta party organised the night before the Chester Marathon last October.  It was great to see familiar faces plus some new ones; all with different goals and motivations for taking part in the race.

Comrades at  the expo
I took in the obligatory expo from midday Saturday - very busy but nevertheless not to the point where you couldn't move.  It's one of the biggest of its kind.  I wouldn't normally hang around too long if racing as it's a drain on your legs and besides it's basically shopping and I'm no shopper!  I got so hungry I kept returning to the various protein bar manufacturer's stalls and their smorgasbord of free samples

I made a point of visiting the Comrades stand and chatted to the two ladies from the organising committee with a video of the last uphill run playing in the background.  Not for the first time I was daunted by the scale of the hills.  But.. this post is about London.

The hotel (the Ibis Styles) seemed to have dropped the ball (luckily for us) as it was newly opened this year and I am not convinced they realised the marathon was in town.  A Â£38 room including breakfast - set out from 5am especially for the runners (everyone in the hotel was either running or supporting) - was extremely cheap.  London rooms can easily be 5x that the night before the race.  Its also convenient for the start with a simple and free ride (if you're running) on the DLR down to Greenwich. 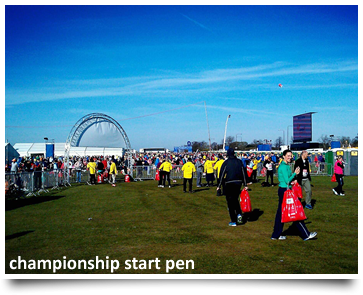 Even the weather played its part. I've run London 9 times now and never been warm heading to the start.  But today it was a perfect day from start to finish - bright sun, almost no wind and temperatures manageable.  I was even contemplating removing layers before getting there which has never happened.

As you close in on the start line more and more runners merge into your journey from their separate routes until all of life is here.  It's a great feeling to all be moving with a single purpose.

Our group gradually went its separate ways via some photos and good lucks as we were at different starts - Blue, Red, Green and Championship.

You then have what would normally be a tense period for me before the off but as there was no pressure on this one I felt very relaxed about it.  I met a couple of runners from my club in the Championship pen, both gunning for my club record time. The Championship pen probably has the widest time range of any with the women qualifying with 3:15 or better and the men from around 2:20.

We were herded to the start behind the elite field and I put myself right at the back of the group.

It's an eerie feeling as the mass field is moved up behind you behind a line of marshals. 20,000 people slowly creeping up on you in the Blue start.

For Boston
There was a 30 second period of silence for Boston.  I don't think I've experienced anything like this.  Sure I've been in situations where silence has been held but this time it felt so personal for everyone there.  There is some bond that connects runners across the world and the Boston bombing felt like an attack on all of us.

Every runner had a black ribbon on their vest or an armband and many had 'for Boston' or similar written on their race kit.  There was an absolute sense of solidarity with the victims and the runners caught up in the tragedy.  The 30 seconds passed without the tiniest sound. Near 40,000 people completely silent. Very poignant and moving.  I hope we made at least a tiny difference and those affected can take at least some comfort that they are not alone.

The Race
London is a great course which unfolds in crescendo. Long gone are the days when there were quiet spots in the support. Docklands used to be silent while construction was underway but now there is no respite.  It steadily builds in so many ways as you descend into the City.  The landmarks start modestly with Cutty Sark the highlight of the first half, now fully restored but just keep coming until you're touring all the major sites in the City and turning for home past the Houses of Parliament and the Buckingham Palace. The crowds build and build until there is a 10-deep tumult.

There are parts of the course that narrow and batter you with such a wall of noise from the supporters it can become overwhelming.

I went out at a steady 6:30ish pace and ended up sticking to it almost exactly the whole way with a couple of brief pit-stops - one necessary, the other a blatant crutch - which added a couple of minutes.

With hindsight a more cushioned shoe than the Kinvara 3 would have been a better choice. It wasn't a full-on race and I had grumbles from the right ankle which has been swollen all week for some reason.  The road quality is pretty dodgy in parts too and when you have soles as thin as a sheet of blotting paper you feel it.

I should also have reprinted my name on my vest.  I used my @windsorAndy Twitter handle but they put an unwanted space before Andy.  Some people clearly thought I must be some posh dude called Windsor! 'Come on Windsor' I got quite a lot. I guess it's a bit much to expect the crowd to proof read your vest for you.

The first half drops down to the from then-on constant race elevation at 5K ish and soon you're at Cutty Sark at about the 6.5M point. I always foolishly feel like it's taken about 5 minutes to get here and the race will be over in a jiffy, smoke me a kipper.

It's a great spot; a massively popular cheering point for spectators. You swing round one end of the ship or another (I can't actually remember which way it's facing. Or indeed which end of a ship is which!) in dry dock.

All the time the crowds and the volume is building and building.  From the relatively uninteresting miles that complete the first half of the race you hit Tower Bridge, one of the most iconic sights in London. It's absolutely rammed with spectators and in the bright Spring sun it's such a striking structure you would have to be made of stone not to be inspired by it.  The waves of crowd noise propel you over the midpoint of the Thames towards Docklands.

There's a stretch where the course runs alongside the return leg from just past 21 miles some 8 miles ahead.  Depending on your state of mind that can be a good or a bad thing! The temperature was gradually climbing and from hereon the number of showers increased and they were a blessed relief. A chilling mist that was like a dose of snuff to your brain and jolted you out of any lethargy you were feeling. I was increasingly grateful for these as the race went on.

I wasn't quite so grateful for the sight of a bloke in a florescent mankini - and nothing else - looming large ahead of me. Something about Wales and probably his name temporarily tattooed onto his wobbling butt cheeks with lipstick swam before my eyes. Given its location I wasn't sure whether he was proud of his Welsh heritage or whether it was some sort of dirty protest.

I pushed on round the tour of Docklands from 16-19 miles; the tough ones for me. You're tired and there's still some way to go so they require resolve before you return along the same road traveled down 8 miles earlier, now absolutely full of runners in the 4.5 to 5hr finishing time bracket. 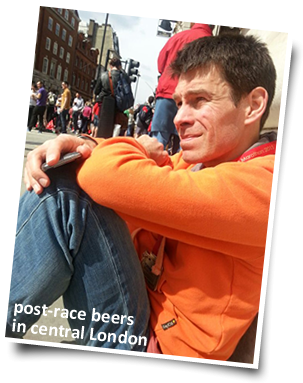 The stretch along the Northern side of the Thames is special. My club mans the sports drink station at 23.5 miles and if my race has fallen apart I usually stop for a chat there but not today; I pushed on still clutching a bottle of drink I'd picked up 5 or 6 miles ago. The Embankment is dead flat and the landmarks of the London Eye and Big Ben pull you round the gradual bend of the river. It's hard to pick out specific cheering now; it's just a white noise and your brain has turned to mush by then anyway and is incapable of rational thought.

The last mile or two seemed to take forever. Despite not running flat out I was still extremely tired and the sun had started to get to me.  With a mile to go I realised I was starting to get dizzy and feel nauseous so the finish line couldn't come soon enough.

It's a great sight to swing around the palace fountain and see the finish line ahead flanked by grandstands full of people.  I stopped the clock at 2:54:04 which I was pretty happy with.  I wasn't going for a specific time and really that was a little fast as I need to train through this for the Comrades.  However it was worth a front pen at the Comrades race and also is a Boston Qualifier; a race I have resolved to run next year.

It's such a great race and today was about as perfect as it gets. I don't remember a better atmosphere. The Boston factor made it special and seemed to bring record crowds onto the streets.  I hear about 750,000 watched the race. I'm sure mainly because its a great day out but I'm equally sure partly in defiance of what happened last Monday in Boston

From a personal perspective the only tiny blight was that one of my fellow club runners Tom Stevens, had a great race and beat my club marathon record, running a 2:36; taking it by about a minute! There's now added motivation to try and reclaim it which is no bad thing!


#Comrades,  #Marathon
Comments
No comments yet.. why not be the first?
Most-read Posts