31st May, 2013
Morning dawns, buffet breakfast gets polished off and a long discussion ensues with the owner of the place, Corlien,  over what we can do today and where she can get a driver to take us.

Maarten has a potential job in Joburg - rather him than me I think on balance - and he'd vanished in a suit already for an interview.  My Cape Town flight was due to leave at 3:30pm so by the time the eggs had arrived there wasn't an enormous amount of time left.

Corlien whistles up a driver, Watson, who pitches up with another punter, Chris, already on board for our tour of what we thought was to be Soweto.  Somehow between the arrival of the eggs and the appearance of a second coffee communication lines had clearly broken down as he was under the impression this was to be a Joburg tour and our fellow passenger had already been to Soweto.  So nothing doing, on we head into town.

This was to be quite a strange tour really.  Either there isn't much to see or our guide was especially fascinated with public transport and banks.  I was beginning to think he'd been planning a robbery for some time and rehearsing his getaway.

He drives us into town over Mandela bridge and points out the taxi station where (hold on to your seats here) people apparently leave to the West, East and sometimes North and South as well.  The bus station follows where it turns out that people do much the same.  We're then told the big 4 banks in Johannesburg and shown some examples of those.

It picks up a little when we get to the brewery and I was hoping he'd fixed up a sub tour of the premises but no,it's the Jazz Walk of Fame at Mary Fitzgerald Square.  At this point he becomes a little more animated and it's obviously something he's personally interested in and therefore by osmosis it's interesting to me too.  There's a statue of Brenda Fassie who was one of the country's jazz greats, though I'd not heard of her myself (philistine) and we were treated to a potted history of her life which followed the all too common route of sudden success, drugs, exploitation, brief renaissance, more drugs, curtains.

Watson then whisks us up to Constitution Hill where he attaches us to the next guided tour of the old fort, the prison and the new courtroom. As you hear of how inmates were mistreated and given food and indeed all privileges of a quality on a sliding scale from Whites thru Asians and then Blacks it's hard to imagine this place was in use so recently.  There's a flogging frame that was last used in the mid 80's. Not the 1880's..

Having had my jazz ignorance exposed, now history was my non-specialist subject.  I had no idea Ghandi visited South Africa, let alone was imprisoned in 'number 4'.  It's a pretty grim place though there's a stark contrast with the modern court built on the same site which is intended to show it is as open and transparent as possible.  It felt more like an intimate concert venue that a court room in fact.

This tour while interesting, has taken some time and I'm getting twitchy with my flight time looming up fast.  We're then taken into the women's section f the prison for further harrowing tales and I can see this taking another 2 hours which I don't have so to the despair of the guide when she realises we don't have a pen for her feedback form, we make our excuses and leave.

It's a curious feedback form as it goes.  There's an overall scale of 1-5 for your opinion of the tour and 5 down to 2 are all fairly glowing in their praise. Only scoring 1 would indicate some form of dissatisfaction.  I may need to use this model. 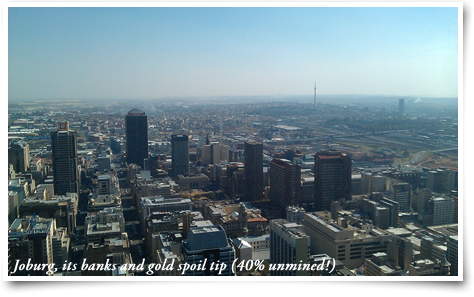 Watson is called up having somehow intercepted Maarten in the car park via another cab and taken him for a sandwich and I again point out we're against the wire for making the airport and Cape Town flight.  Watson is undeterred and with casual assurances says he will show us the rest of town and take us up the tallest building 'in 15 minutes'.

I've got a problem with cutting travel arrangements fine, especially with the unknown quantity of a motorway to the airport and a security line to contend with, but Watson, not to be derailed, drives into the centre of the city via some more banks and taxi ranks and even for variety a railway line before we pitch up at the Carlton Centre; part subterranean shopping mall, part derelict hotel (the most part actually) and the 50th Floor 'top of Africa'.

This is the tallest building in Africa and the hotel which used to occupy it closed down, according to Watson, because guests were all too often the victim of crime.  He pointed out a couple of other empty hotels in prime real-estate which have gone a similar way however redevelopment plans including new hotels are underway.

The Cartlon Centre is shabby but a lift propels you to the top in short order to a viewing gallery with a 360 degree vantage point over the city.  It's no less shabby, and we're the only ones there but the views are good.  It's the only major city in the world that isn't built around a river and that is striking from up there.  You can see the spoil tips from the gold mines that founded the place in the distance.  Actually I'm taking almost nothing in and actively discouraging questions; the promised 15 minutes has long since expired and I'm breaking out in hives.

Finally, after another round of spot the banks in the landscape I chivvy the lot of them back into the lift and we're en route to the airport.  Chris wasn't going to the airport.  She was happy to but instead Watson sorts out a rendezvous with another driver in a garage car park on the fringes of the city and we abandon her to her fate. 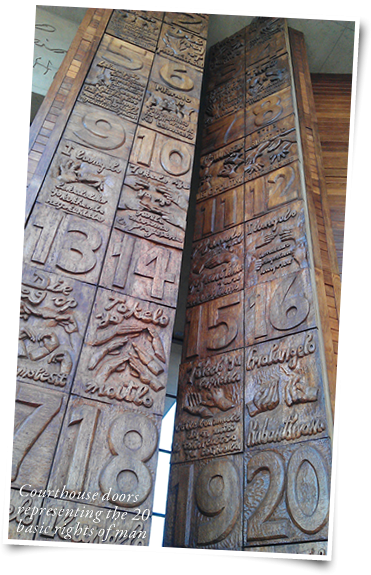 She was never heard from again.  To be fair we had no way of actually hearing from her again unless she hired a skywriter so had we done so that would have been more creepy in the event.

I can't say I warmed to the city centre at all and I wouldn't rush back. I wouldn't dawdle back for that matter.  That's a shame and probably very unfair because we spent so little time there and I'm sure it has a lot more to offer.

Watson puts his foot to the floor and we make the airport with just time for a quick sandwich despite the security clearance bit and bag drop being almost completely deserted.

I head to Cape Town; Maarten and Helen to Durban.

It's a 2 hour flight on an half-empty plane and by 5pm I'm in Cape Town at Budget rentacar with another cheerful employee (there's a lot of cheeriness here) checking over the car.  It transpires there's a dent on every panel and for good measure I point out the bent number plate to complete the set.  Your man breaks out into a broad grin and waving expansively say I'm now free to do what I like to the car because everything's noted as damaged. But, suddenly serious, he warns - 'but don't roll it!'.

Day turns to night in about 30 seconds at this time of year and dry turns to rain in a similar timeframe so I had to navigate to Camps Bay in the wet and the dark without a map.  Quite a fundamental oversight, that. But, using the force I actually found the place.  The Corolla has 6 gears according to the stickshift but in reality there are only 2. First which operates like your standard first, then 2-6 which are all exactly the same and collectively worth about a 4. All useless on hills, where you're back down to 1.

As luck would have it the hotel is right on the seafront otherwise I would still be searching for it now.  It's a small place but looks pretty decent and I decide to pillage the minibar and stay in; exploring the place can it til tomorrow.

#South Africa Trip
Comments
No comments yet.. why not be the first?
Most-read Posts