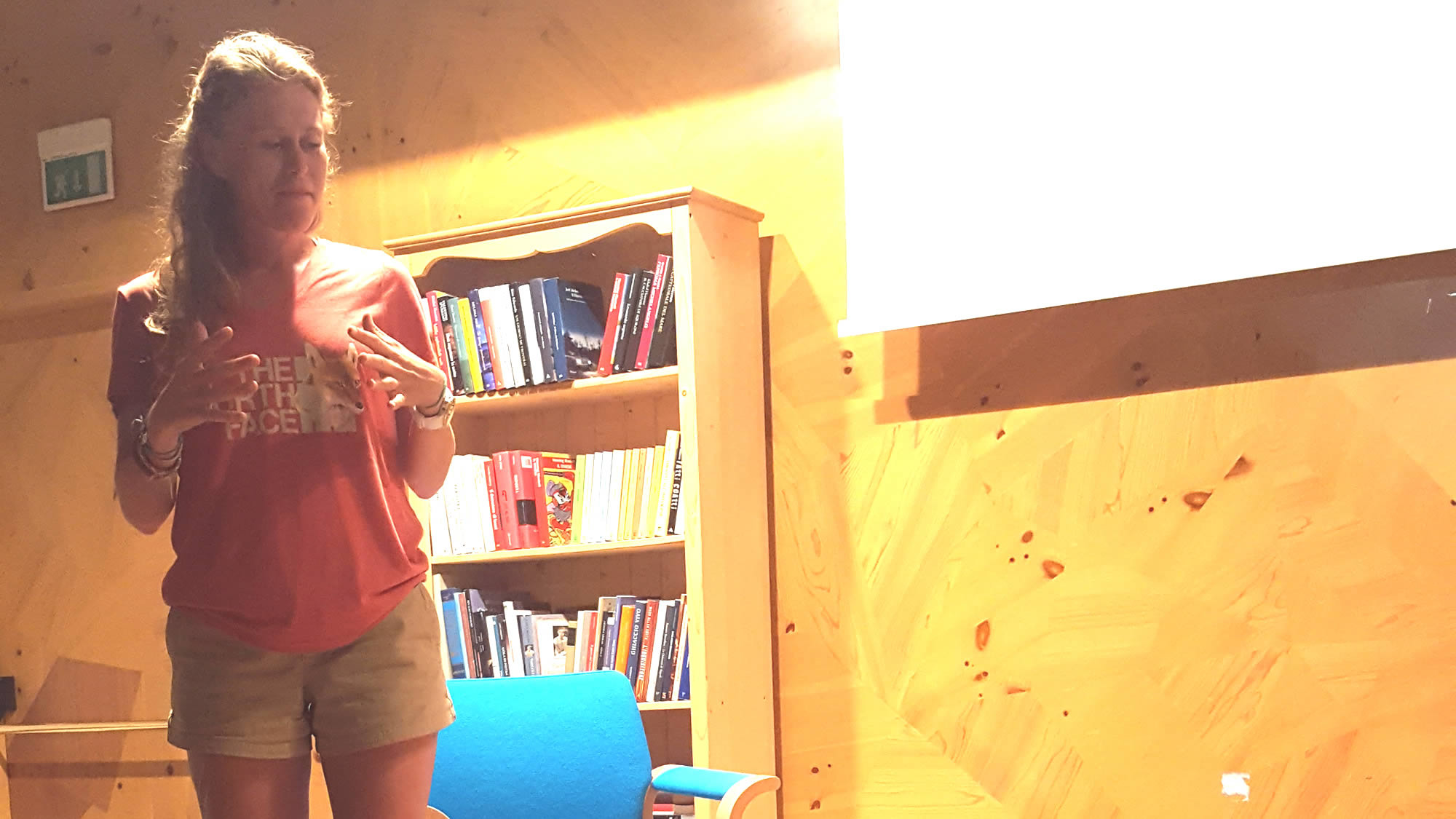 Some lively weather forced the location of this talk from Hillary Allen and Fernanda Maciel indoors at the last minute which was unfortunate as I think a lot more would have attended and they were more than worth the effort.
I wanted to write a post about this because Hillary's story in particular is immensely inspiring.  It's an extraordinary, medical profession-defying return from near death to elite level trail running in an incredibly short space of time.
We as runners often I think fear the worst at every injury setback, and it's easy to fall into despair that you'll never run again when sidelined with one of those slow-to-heal, difficult-to-diagnose issues that affect us all at some point in our 'career'.  If you're into running, it's a major part of your identity and its loss is keenly felt.
So I think Hillary's tale should help serve to make us realise there is always hope!
Hillary has been through some pretty extreme trauma in the past 9 months, airlifted to hospital having fallen 50 metres as the trail gave way under her in the Tromso Sky Race.  She broke two vertebrae, both wrists and both feet including serious ligament damage which she was told would mean she would never run again.

The emotions were obviously still very raw and, after a moving intro documentary film, had to fight to contain her tears as the images brought it all back before beginning.

Hers is an enormously empowering story of our ability to overcome adversity through sheer willpower and determination.  She documented her recovery on Instagram (@hillygoat_climbs) - from being unable to do a single thing for herself, to finally being able to leave the bed (onto a chair next to it), to 'driving' a bizarre-looking modified scooter a couple of miles (to force herself to exercise) to a coffee shop, to being able to walk and finally take a first run.

During her recovery, she broke the screw holding her foot together and that required further major surgery to repair, a re-breaking of the bone and inserting more metalwork.

Just to be able to run again would have been remarkable enough.
At University I, literally overnight, went down with a form of reactive arthritis just as I had rediscovered running.  It was to take 7 years to clear after many times when everything felt hopeless and permanent inability to walk without a stick and considerable pain was my future.  I was no elite athlete of course, merely back to running round the block so I can only guess how it feels for someone on top of their sport to have it all stripped away in an instant.
But I can relate to that first run back.  For me it was almost like the plot of Awakenings.  One day I could suddenly run and tore gleefully up and down a corridor in the appositely-named Phoenix Building at Bradford Uni.  The clouds briefly parted and, of course, there was a price to pay for some time afterwards but it didn't matter - there was hope! There's not much that surpasses that feeling - the realisation that it is not all done!
In just 9 months she was back on the podium in 2nd in a VK race and was in Cortina to take part on the 57km SkyRun.  It travels predominantly over the back section of the Ultra Trail so it's extremely hard.
To her astonishment, she won the race!
#health,  #HillaryAllen,  #injury,  #Trail Running
Comments
No comments yet.. why not be the first?
Most-read Posts