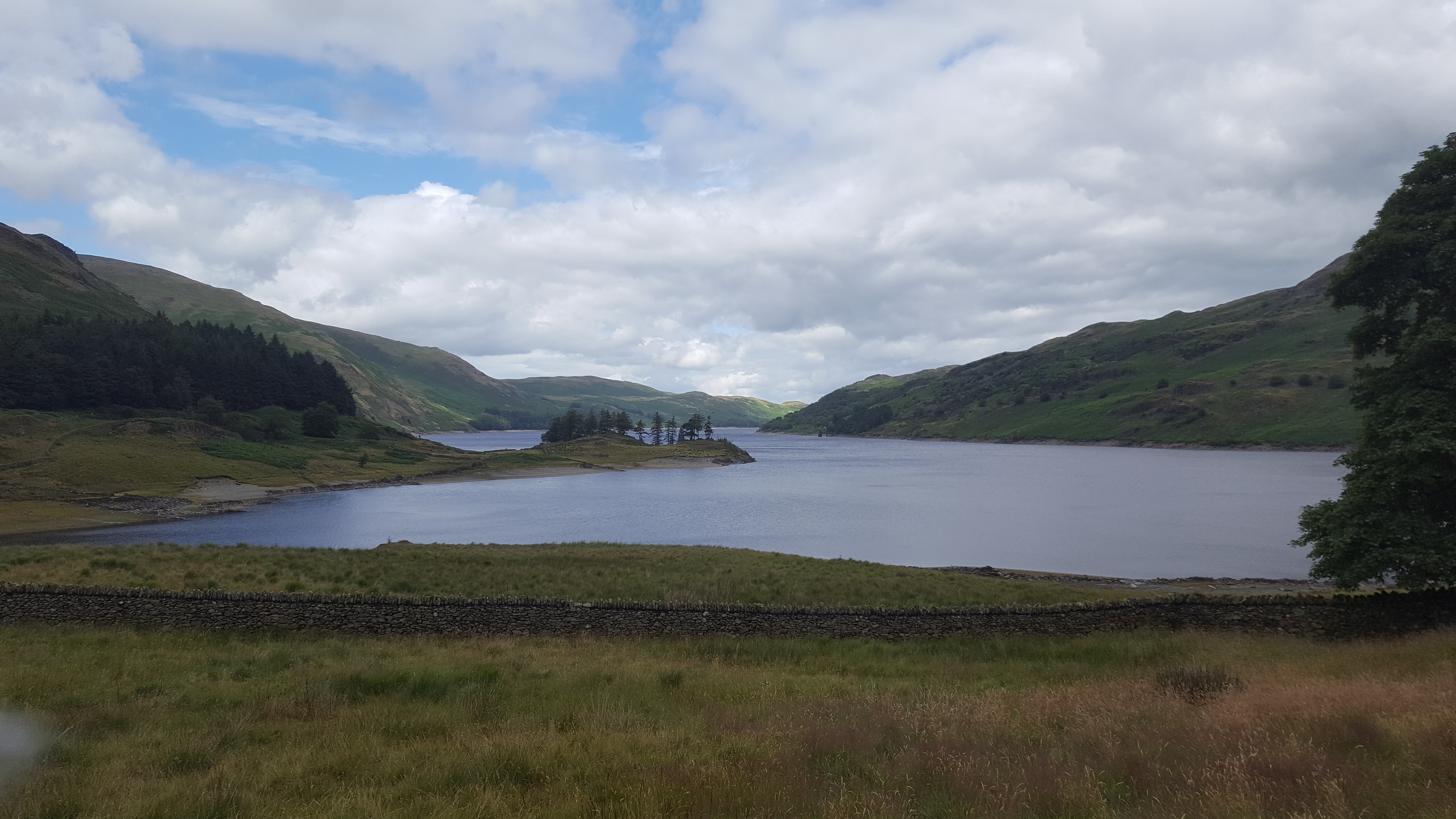 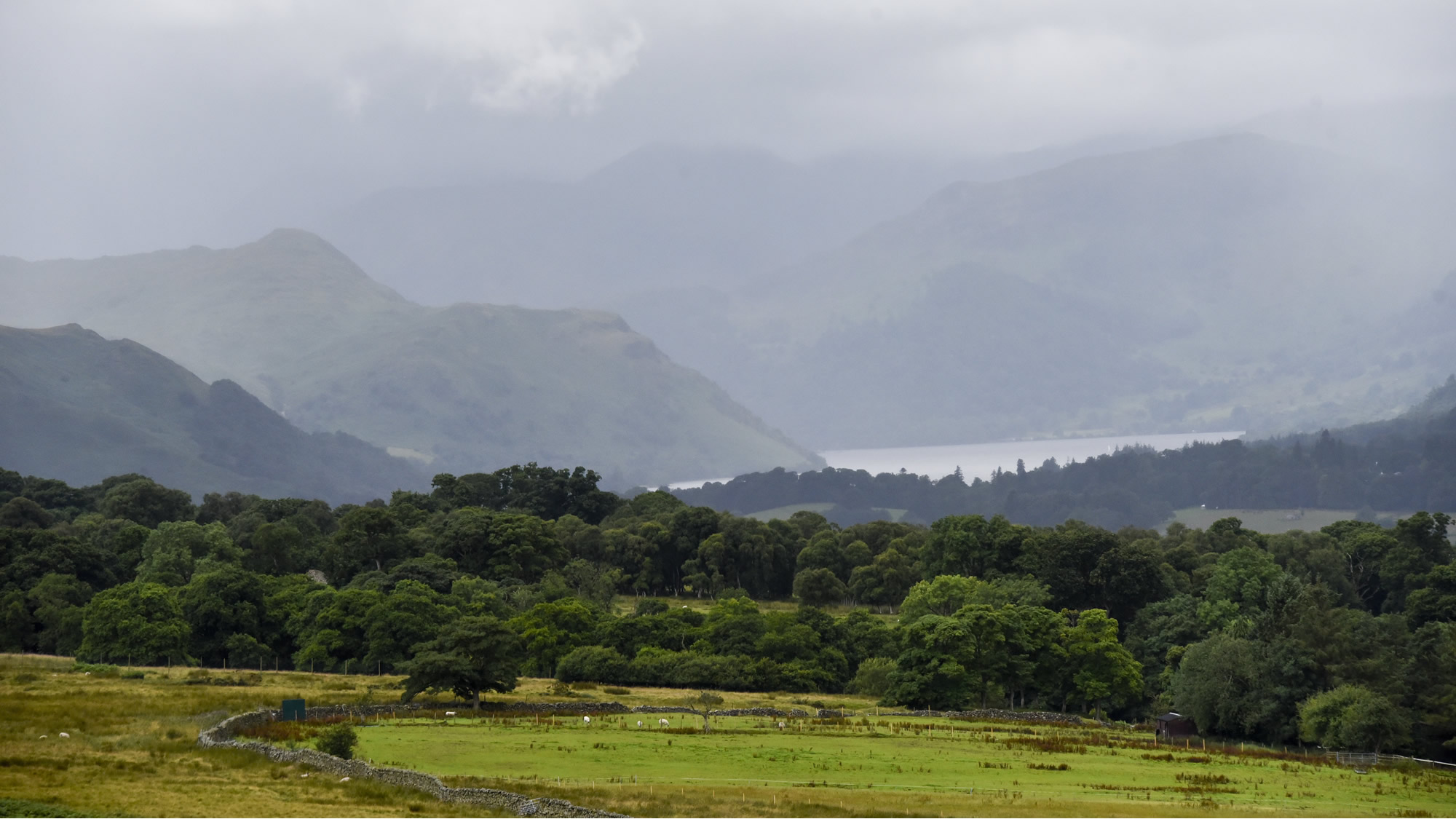 This year's injury of choice - some sort of plantar fascia/policeman's heel/bruised fat pad sampling platter of frustration hung over this warm-up race for the CCC for a few months. I made a last-minute decision to run, mainly thanks to a cock-up on my part over the last day I could cancel my hotel. I took that as a sign and reasoned even getting part of it done would be useful training.

The drive up to the Lakes on Friday was the worst journey I've made by car. 8 hours of jams and torrential rain to cover the 270 miles between Windsor and Coniston; crawling along the M6, wondering idly if the constant clutch action was going to wreck the heel again. But I made it to registration with an hour to spare, and, more cheeringly still, to the hotel bar before last orders and had time to sink a couple of pints of Jennings while poring over the race map.

Registration is more involved than many ultras - they checked the entire mandatory kit list and even weigh you before attaching a timing dibber thing to one wrist and a couple of wristbands to the other. The 100 mile event was already 3 hours old (a circular course from the race HQ) and it was apparent they were for it overnight weather-wise. I hoped the better forecast for the 50 would hold out.

This is the 10th year of the Lakeland 50 and 100 and it's obvious a lot of people rate this as one of the best in the UK. For a start it sells out 700 places in a couple of minutes. At the pre-bus-to-the-start briefing a show of hands suggested at least half had run this before. It was reminiscent of the Boston Marathon in fact with people coming up to me in the hotel and 'are you running the 50? I/my son/my daughter ran that x years ago..' The organisers give a lot back to local charities and it seems it's become an important fixture in the calendar. There's something different about the level of camaraderie in the room too - it's never been so easy to pick up a conversation with, well, anyone and this held true throughout the run as well. Our MC called it the 'Lakeland Family'.

I took the event bus to the start at Dalemain - also like Boston, there was a caravan of them snaking round the twisty, narrow roads out of Coniston covering a flatter and more direct route than we would have to run back.

The Dalemain Estate is the start of the 50 mile race and the halfway point of the 100. During the usual lengthy queue for the portaloo 100-mile runners were coming through to tumultuous applause. What concerned me was despite the fact they all looked pretty good and were running, they'd been out there over 17 hours. How hard is this course?!

I bumped into Lee Bodell from off of Twitter sheltering from the intermittent rain under a tree before the off and the chinwag filled the last minutes before the start and a 4-mile circuit of the Estate as an entree to make sure it's exactly 50! It seemed a bit unnecessary but I enjoyed the lap.. an easy way to break yourself in and the sun started to come out. It gave the supporters a chance to see their team off I suppose and it was good to be sent out onto the 'last 46 miles' with the cheers ringing in the ears.

There was no pain coming from the heel initially, these first miles were pretty easy and all was right with the world. But by the first CP at 11ish miles there were niggles and I was favouring it, landing more on my forefoot on the downhills which I thought would likely break something else before too long. I didn't hang about at the CP, stopping only for a couple of jelly babies and headed up the first big climb of the day up to High Kop - the highest point of the course at 670m.

That was a tester with the paths getting more technical all the time and with lots of waterlogged peat to sink into and plenty of false summits for good measure. The scenery is of course spectacular! 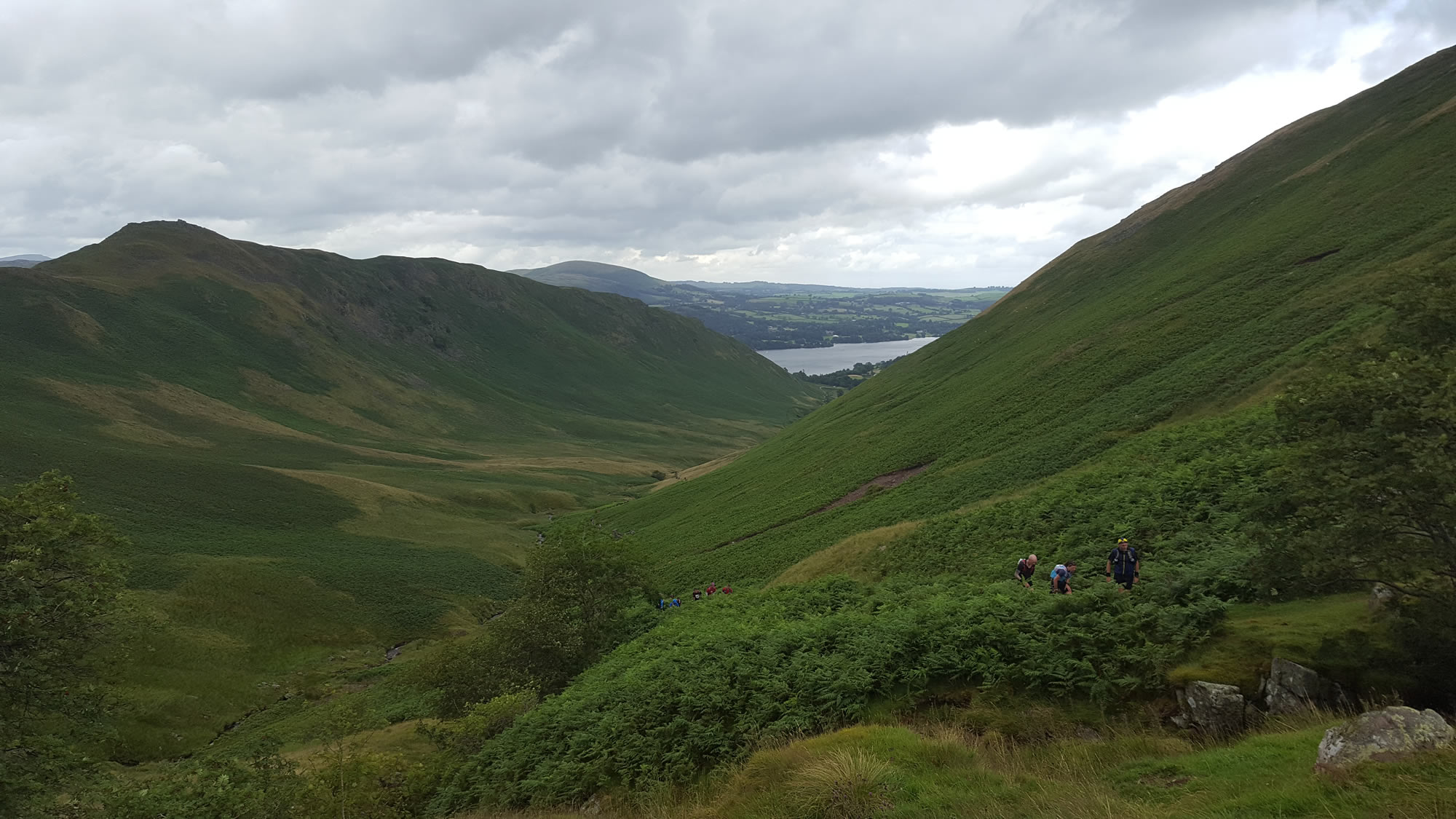 Looking down on Haweswater, climbing to High Kop

I ran into Anna Buckingham and Doug, competing as a pair on the way down the other side and have to admit didn't realise it was the 'WON THE SPINE RACE' Anna Buckingham as opposed to any other Anna Buckingham you might chance upon. Anyway I was somewhat distracted as all the while the heel pain was becoming more insistent and by then a consant companion. Bashing it on a few rocks here and there on the technical path around Haweswater the prospects looked grim and reaching the next aid stop 20 miles in at Mardale Head I was considering chucking in the towel before it was damaged beyond repair.

I'm used to great volunteers by now.. these guys are always incredible, but they were at another level during this race! Nothing was too much trouble. I think they'd have started Feng Shuing the tent if I'd asked. I was presented with a hot soup and a 'spoon' fashioned out of a cheese sandwich and considered my fate as I demolished it.

I thought I'd give it a bit longer - let's face it, I'd come a long way! And surely it would last another 7 miles. The first of those was unfortunately up Gatescarth Pass, possibly the steepest climb of the day. I got 3/4 of the way up and stopped to poke at the heel without any real idea what that was supposed to achieve. Dropping now meant retracing all the way back down so, again, I resolved to continue on.

The summit passed, the descent was almost as bad - very steep and unpleasant underfoot. I actually think you can get away with grippy road shoes on this course if it's not too wet. Then to my surprise, the heel didn't really get any worse. Probably numbed into submission. I reached the Kentmere CP at 27 miles without too much incident, running into Kirsty from Run247 on the way only to discover the legendary Cat Simpson helping out on the other side of the trestle table!

Now of course, completing 27 miles meant there were only 23 left. A trifle - and that was the end of any thought of stopping! The next 7 and a bit miles to Ambleside started with a tough drag up a rocky path for a couple of km but then a lovely long downhill on fairly forgiving trail at just the right gradient. Could have run that all day but there was another steep road climb before we dropped down into the town.

There had been lots of encouragement along the way from everyone we met but Ambleside was unbelievable. The whole town was out on the streets and spilling out of pubs (I could have murdered a pint) cheering and hurling friendly banter. It was so unexpected. Outside of a major city marathon I can't remember an atmosphere like it. It felt like the finish line but there is still another 15 miles to go. 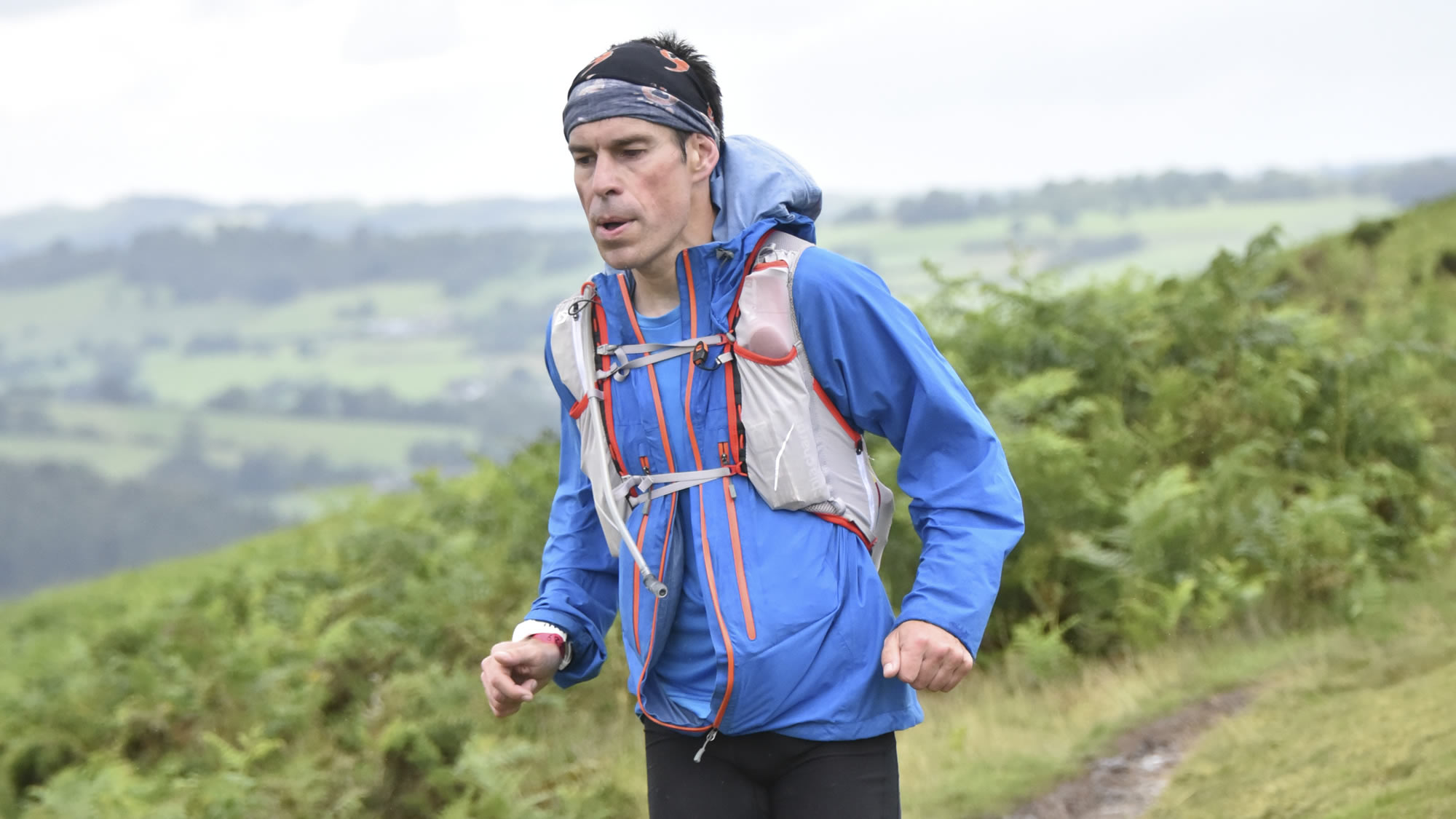 The section to Chapel Stile at 40 miles is the most benign of the race. Once the legs have started moving again after the pause at the CP and the drag of a climb that follows it's an easy riverside path for the mostpart and I made good time here. The light was fading fast by now so I pressed on once everything had been refilled (I got through a surprising amount of water even though it was very mild).

With more technical terrain over indistinct paths, and the runners by now well spread out, I found this a struggle in the gathering gloom. It's very easy to convince yourself you've gone off the route and navigational features listed on the roadmap became impossible to distinguish. Most other runners seemed very familiar with the area and as we're now running with headtorches there was the occasional reassuring sight of a distant light heading the same way. I let a few groups go by who were better over the rough stuff than me and clung on to their tail as long as I could to avoid getting lost! I was stranded so long at one point I felt like Jenny Agutter in Wakabout. Though even she had a dog!

Eventually, via some bracken trail more headlights could be seen below which was a relief but the stretch of bog to reach them and the unmanned checkpoint was a total swamp and before three strides had passed I was up to my thighs in animal ordure. 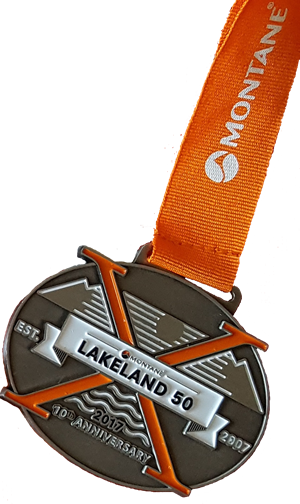 A downhill road section was welcome to me - road I can do - and a steady rhythmn helped as I was very tired, to the extent that I started reading the wrong page of the directions and would have carried on oblivious had not a small group with me put me right. I still didn't realise I was on the wrong page (actually I've literally only just realised I was on the wrong page) and must have irritated my companions moaning about how unclear the instructions were! Embarrassing!

Eventually the CP was reached and there were just 3.5 miles left to go. If that seemed like a walk in the park and a mere formality there was to be a rude awakening coming. The climb up to Yewdale fells was punishingly steep - first up stone steps, then difficult trails - and bodies were strewn everywhere taking a breather.

When I reach the top I was totally alone and yet again started fretting I'd gone wrong. I waited a good 5 minutes for someone to come - the relief of seeing that headtorch! - even resorting to shouting back down the trail a couple of times. But having been rescued there, I went wrong half a mile later, missing a stream crossing and heading beyond up on the fells. Again distant headtorches put me straight and I retraced. I really wanted this race over now! There was so little ground to cover yet it felt at every step I was about to wander off into oblivion.

The descent off the fell was extremely technical and I hated pretty much every step of it, but somehow didn't notch up a fall. It gave way to switchbacks, a more solid path and then the road down into Coniston. I really enjoyed that and managed a reasonable pace with 50 miles in the legs all the way into town and back to the school requisitioned as race HQ.

The place was thronged with people and every runner home was treated to a deafening welcome of cheers. It was midnight by the time I rolled in, 12hrs 34 minutes after setting off.

What an amazing race! I would run it again tomorrow. The 100 I would think twice about - those guys are legends, every one I passed going so strongly. I'm sure I'd have fallen off that last climb if I'd had the extra 50 miles completed!

There's food and drinks and war stories and I eventually made it back to the hotel at 2:20am. Probably the first race I've ever done where I didn't get a pint afterwards!

I don't know what to make of the plantar fasciitis - it seemed like it was going to stop play but then settled back down. I've yet to run since so I don't know how it'll react but it's certainly stayed pretty quiet. It's a mystery.

Next up I have my A race of 2017 - the CCC in Cormayeur / Chamonix. It's just 4 weeks away so there's little time for recovery and it features 200% of the elevation of this race over just 125% of the distance. I'll be simply aiming to get round!

#Scenery,  #Trail Running,  #Ultra Marathon
Comments
No comments yet.. why not be the first?
Most-read Posts