1st February, 2014
The original plan had this as my second ultra of the year, the first being the Country to Capital but the same team, GoBeyond. However, the soleus tear which wiped out the last couple of months of 2013 hadn't healed in time to risk that one so after a scant 3 weeks of training - and pretty low volume training at that - I'm on the 6:38 from Slough heading to Oxford Station.

If I wasn't trying to get in shape for a debut 100 mile attempt in May I'm sure I'd have considered this too ambitious without a few more weeks buildup but on balance, given how few weeks there are left to go(!) thought it essential to get a long one in.

I'd thought the TT50 ('the UK's biggest 50-miler') would be a useful recce for the TP100 - the 50 is the second half of the TP100 though in the opposite direction from Oxford to Henley.  In the event of course, the wettest January on record since the Weather Girls' "It's raining Jan" totally blew the route into the water.

All credit to the GoBeyond team. I'm sure most RDs would have thrown the towel in under these circumstances but they were adamant a race would be put on and worked tirelessly to reroute away from the Thames.  It wasn't even as simple as issuing a revised route either because the water levels and surface flooding were a constantly moving feast they were even changing the course live.  Of course it completely changed the nature of the race and not for the better but it was unavoidable. 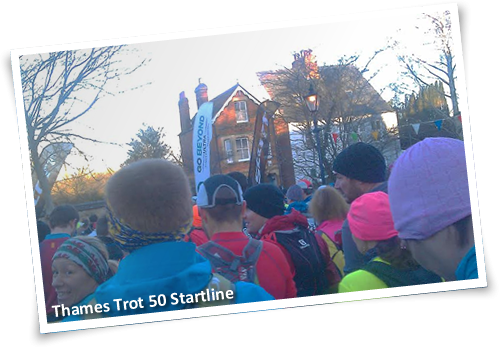 As we were to find out they may have succeeded in moving the race from the Thames Path but they certainly didn't avoid the water.

I didn't pay too much attention to the map, following others instead who were doing a better job than me of juggling the original map book, the revised map book and the list of further descriptive revisions issued two days before. My finish time wasn't really important to me in any case.

Footwear choice was road shoes. I don't think there was a right decision to be made here - whatever was comfortable. Where the whole race had originally been flat trail, the new course was probably 80% paved.  Where there was mud it was so thick it would have defeated most trail shoe lugs.  I did hear a fellow runner who'd opted for studs - he sounded like a military procession on the pavement and I did wonder how he coped later on. Can't have been comfortable. I used Saucony Kinvara but with the benefit of hindsight I'd have picked a more cushioned shoe.

GB races always seem to start in a pub (all my races finish in a pub) and increasingly said pub is full of familiar faces.  I love putting faces to Twitter handles and it was great to meet for the first time Sarah (@mia79gbr), Rodrigo (@BrazilianGunner), Paul (@P_platt) and Taff (@thunder_runna) who's also blogged about the race.  Also Mike from Apex Sports who I've known for many years and who sponsors the race.

We start late because GB had to bus marshalls to navigate us around the latest changes and head out from the Prince of Wales in Iffley with a quick glimpse of the Thames. Can't remember when we were to see it again!

I found the race a real struggle pretty much from the off. One of those days where you don't feel quite with it and I had a mildly dizzy sensation which stuck with me until the sheer impact of the distance made it indistinguishable from the fatigue and aches.  I just couldn't seem to run in a straight line for any length of time and ended up, to my frustration, slipping into every water-filled tyre track of every path, every hedge, the odd bit of barbed wire etc.

Fortunately the sky had exhausted its supply of rain by the morning and it was almost perfect sunny weather and the rural scenery slipped on by.

Checkpoint 1 took an eternity to reach (actually about 75 minutes!) and I'd no idea of distance because I've yet to get past the list of contents in my GPS watch manual & I left it at home.  Here and at every other opportunity jelly babies and the fabulous GB secret recipe cake were stuffed down and kept me going.  I was also auditioning chia charge flapjacks which I highly recommend. They're stuffed with calories and very moist but instead of the over-sweetness (to my taste) of most of these things, they cut these bars with salt which takes the edge off the sugar and you probably need the salt later into the race. Certainly a more palatable way of replenishing it than Comrades' salty potatoes.

The real water obstacles started about 20 miles in. I have to admit some incredulity when presented with the road ahead completely submerged and no alternative but to plough straight on through it.  The water is ice-cold and stings like an electric shock.  This road has a few further surprises in store as the sea bed is completely invisible and it's clearly not flat down there.  Choose the sides and risk sliding on mud and faceplanting into it or the barbed wire fence; choose nearer the middle and risk hitting random underwater crevasses that plunge you up to your privates.

By the time the far side is reached all sensation below the knee has gone. I dread to think what would have happened if I'd tripped up and fallen in.  It may have been a sunny day but the wind whipped round the waterlogged calf guards and the slowly-returning sensation ached dully and made any coordinated attempt to restart running absolutely agonising.

This would happen at regular intervals for the remainder of the race.  Where the water stretches were below mid shin-height and you could run through them I didn't mind them too much.  In fact later in the race they were like a dose of smelling salts and snapped you back to alertness.  However any deeper and the drag on the legs was too much to run so walking, and freezing, was the only option.  I perversely enjoyed the incredulous looks of spectators as they saw us runners splashing along what would normally be impassable paths.

By the 3rd checkpoint (of 5) in Goring and roughly a marathon down I was feeling pretty strung out.  I welcomed the greater spread of savoury food on offer and filled my boots.  I spent a good 10 minutes there - too long as you soon stiffen up; best to keep moving.  I was pretty much over the road route too by now. Some nice scenery aside the hard surface was taking its toll on my legs.  I'd lost sight of the guys I'd been running with thanks to a pitstop and some general crap running so headed down to the Thames Path (!) cutting a solitary figure but for the odd groups of walkers coming the other way.  'it's a bit less muddy of you use this bit to the left' while I just plough straight through the water long since past caring about such trivial matters.  This is a nice stretch of the course with soft trail looking down on to the swollen river and with some gradients to keep it interesting (and provide a valid excuse for a walk).

At checkpoint 4 (31 miles) I was caught up by Mari from Norway who I ran with for the rest of the way.  At the Comrades pre-race presentation they tell you if you want to get your pacing right, follow a woman - they're much better at it and her sheer metronomic pace was a huge help.

At the C2C in 2013 I'd been reduced to run/walking the last 10 miles or so but today I ran the lot with the exception of some hills - especially the long drag out of checkpoint 5.  I noticed that, thinking about it dispassionately, I wasn't actually in that much discomfort.  Sure I couldn't have changed pace if you'd paid me, and stopping produced lengthy groans and moans fro every sinew but underway, the body settled into a routine and kept bashing out the miles.  I'm intrigued to know whether that's because I ran this slower than the C2C or some other reason. But the impact of the roads etc. must have cancelled out any benefit of reducing speed.

The last checkpoint came at around the 40-mile mark and after a quick refresh of the water bottle and a pretty ineffectual stretch we pressed on up the hill for the home straight.  The final set of race diversions routed us through some woods on the outskirts of Henley with some easy downhill running on trails towards the finish before the final circuitous route through town to the finish line to avoid yet more floods.

We crossed the line in 7:47 with no small amount of euphoria and immediately hit up the tea tent and some mini pasties to make a small dent in the 4,500 calories we'd just disposed of.

As races go it wasn't a classic. But as I will stress again that's through no fault of GB and I'm very grateful to have had the chance to run at all.  I didn't smashup any records either but on the plus side I ran the whole thing which has given me a lot of confidence.

I've not yet found that higher state of transcendence that top ultra-runners talk about .  The ability to lose oneself in the trail and rise about thinking about any discomfort. I'd love to be able to do that one day, but I do feel I moved a step closer to that today and though I welcomed the finish line, I could have gone on.

First one of the year down. The next is a 50K next weekend down in Devon, recovery permitting.  Writing this the day after, both ankles are complaining and there's some achilles bursitis going on in the right leg but surprisingly not one solitary ache from any leg muscle.  Amazing given the almost non-existent build up.

#Thames Trot,  #Trail Running,  #Training,  #Ultra Marathon,  #Marathon
Comments
No comments yet.. why not be the first?
Most-read Posts