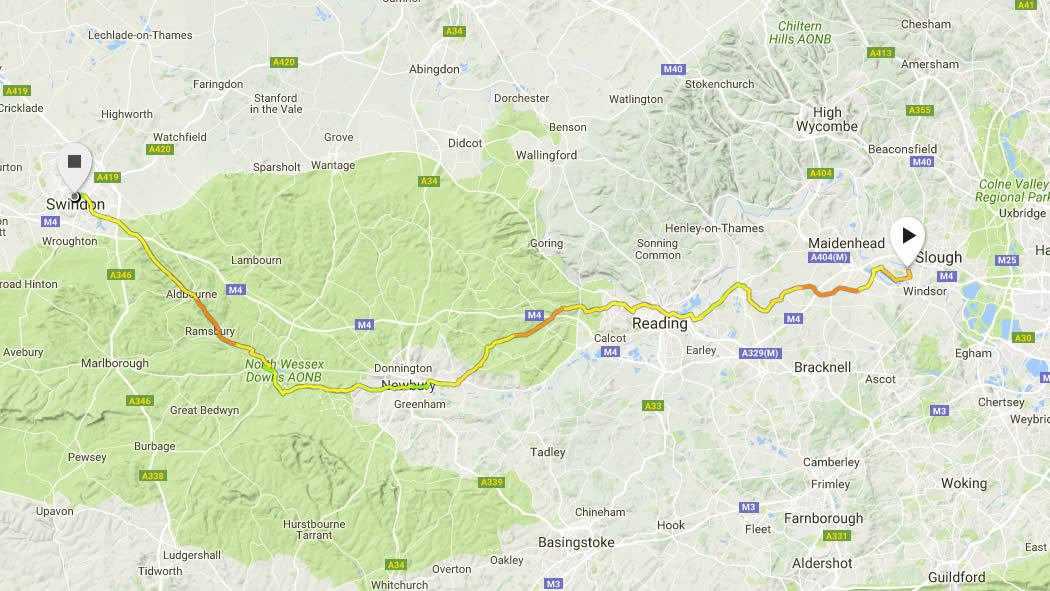 7th March, 2017
London to Paris is fast approaching and free weekends disappearing so I thought I'd make a concerted effort at a long ride last weekend and find somewhere 70-odd miles away and get on the bike.

I originally planned to go out and back with an overnight stop and therein found the first battle. It's so much easier to plan runs! But finding a quiet route that you can take a road bike on I have so far found very difficult and frustrating.

I met Bec who plays guitar with the Blue Aeroplanes at a gig in Oxford recently (and runs, folks). She has her own band (I Destroy) and they were playing Swindon which can be made to be 70 miles away if you want, so I settled on there. Long ride, all the food, gig and the odd pint. Perfect!

Cyclestreets.net - useful tool. It gives you 3 different routes of varying quietness though not a single route I've plotted so far has been flagged as anything more benign than 'this has some very busy sections'

Movescount - Suunto's online logging service for their sports watches. You can search for routes others have run/ridden and copy/edit but the edit is very broken - it often refuses to save your changes

Strava - lots of runs and rides stored, though as with Movescount it's ok for finding some random ride but useless for 'I want to go from A to B somehow'

Ride With GPS - another planning tool, and another that could use an updated user interface - it's extremely busy.

Garmin Connect - I've just started using this and so far unimpressed. You can't even upload a route?! Are you serious?!

Sunday's weather was awful. There was in-your-face wind, rain and hail but let's face it, the Paris ride could just as easily feature some or all of these and I'd booked an all-you-can-eat buffet breakfast and that wasn't going to waste.

I recently installed cleats and have taken to them like a duck to lava. Without them this bike is an untamed beast but with them it seems hell bent on my destruction. I figured by the time I pitched up at Swindon's Travelodge I'd be an expert. Fat chance.

One thing I won't have to lug on the Paris ride is the backpack - that's going in a van (I hope?!) and that will be a bonus. It weighed plenty and being top-heavy in a gale is not a good look.

I pushed off towards Taplow during a gap in the rain and once passed Dorney Lake all thoughts of an idyllic potter through bucolic countryside vanished under the first downpour. 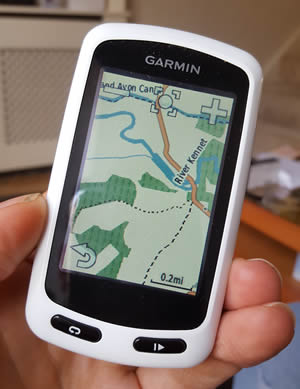 I used Garmin's Edge Touring to navigate and have to say it's pretty good. The screen is no Retina display but the detail is plenty for riding. Certainly much better than using my Suunto Ambit and its single, solitary line to nav with.

It will work out routes for you but seems to grind to a halt doing so for anything over 15 miles. If the Garmin comes up with the route, you get turn-by-turn directions; if you upload one it's just a line.

I got about 10 miles before the first issue with the route - it turned into a muddy field. But that's a simple work-around with this gadget.

Second issue, I fell off. And this was to be a feature of the ride. The number of falls would exceed the number of Shot Blocs I ate. In fact it would exceed the sum total of all my falls from a bike ever since the stabilisers were first removed and I wobbled down St. Michael's Close.

I'm struggling with the cleats and clearly need to spend a lot of time practising with them. I get one foot out and somehow manage to tip over the other side. It got old quite quickly. Just to add to the frustration, probably thanks to the continual pounding on the tarmac, the lowest couple of gears refused to stay locked in.

But you just have to keep getting back on the horse!

The planner had done a pretty good job of finding a quiet route.. there were very few cars and I was continually suprised at how wide a berth they were giving me and the patience shown when there was no passing. Maybe I got lucky there. It was a Sunday after all!

Along the Thames Path and through some villages to Newbury it was pretty pleasant riding. The rain had gone, but the headwind was relentless. I stopped at Newbury for some calories, sheltering out of the gale behind an office. I didn't eat a whole lot and drank even less - I think only a couple of hundred ml of water the whole ride. Too little.

There was another stretch unsuitable for road bikes along the Kennet and Avon canal which was pretty hairy and I nearly went in the drink! These delays were eating into the day as did another gale and hailstorm just before Hungerford which I waited out, sheltering inadequately under the smokers table umbrella outside a pub.

I did consider sacking it at this point.. I was soaked and it was going to get dark before I reached Swindon. But talked myself into carrying on only to find another stretch of canal impassable to the bike. So I had to change plan and take a more direct route on a B road. I really didn't enjoy this journey in the slightest. Loads of standing water, national speed limit road in the failing light and more rain falling was an extremely uncomfortable experience. Fortunately it was quiet and I'd brought the lights I really didn't think I'd need!

The road climbed up to the Ridgeway and by now dark, the lights of Swindon over the brow were a welcome sight. I've never been so pleased to see a Travelodge. I fell off once more for good measure within a mile of it on the pavement and from that point on pushed it on foot!

I just made it in time to inhale a house pulled pork burger before jogging over to the Rolleston Arms to catch I Destroy before missing too much of their set.

Given the number of people in there I think the pub's booking agent must be Polymer Records' Artie Fufkin. That was a shame because they sounded great and were well worth the trip. 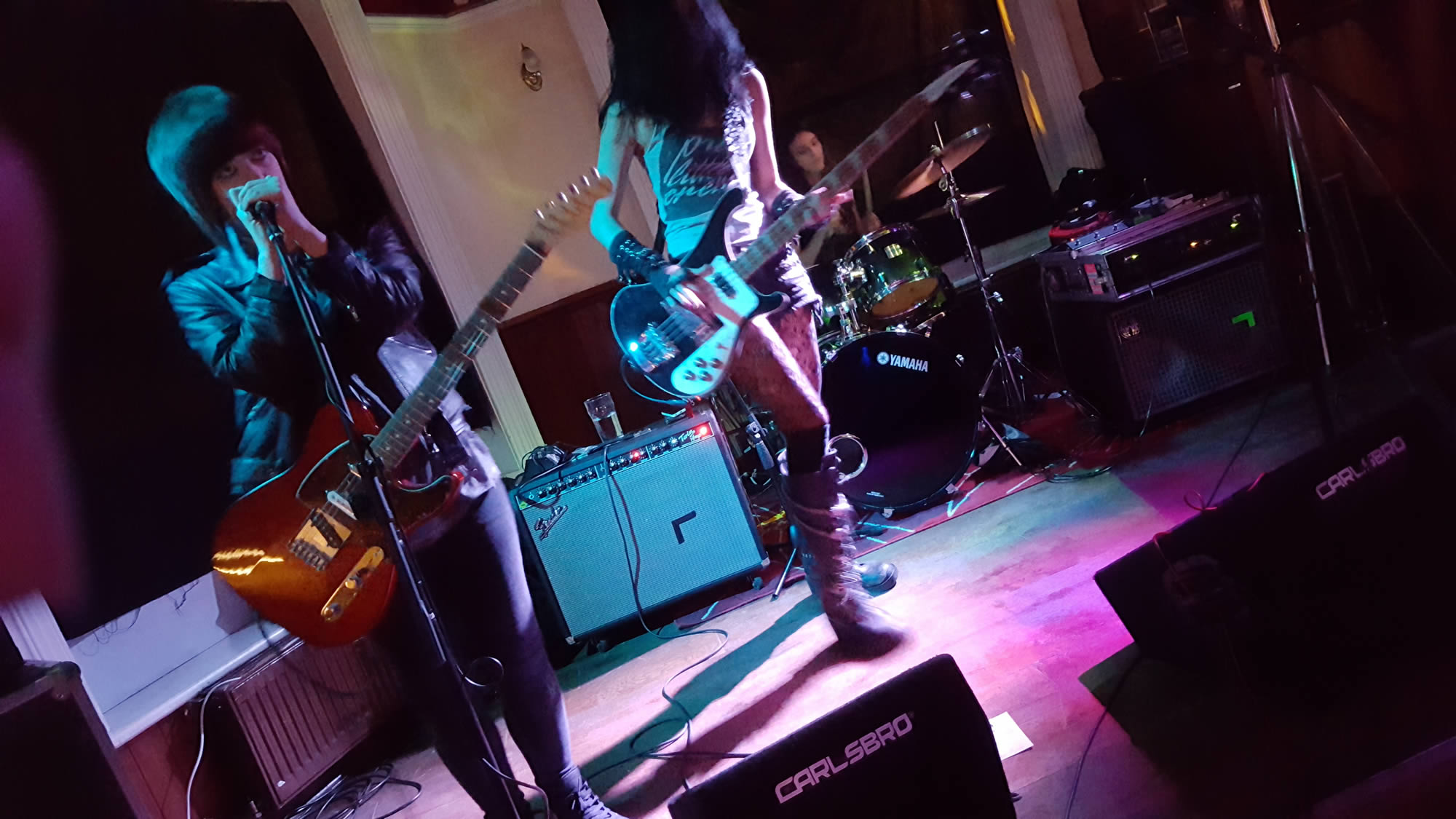 So.. given that the intention was to build confidence on the bike this was hardly an unqualified success. If anything I'm less confident than when I started! I'll get some more practice freeing myself from the machine somewhere safe and hopefully that'll sort it out. But it was good to get it done on a pretty awful day for it.

Got any resources for route planning? Got any tips for getting out of the cleats? Let me know in the comments!

Finally, if you like Elastica-stylee rock - check out IDestroy's Soundcloud 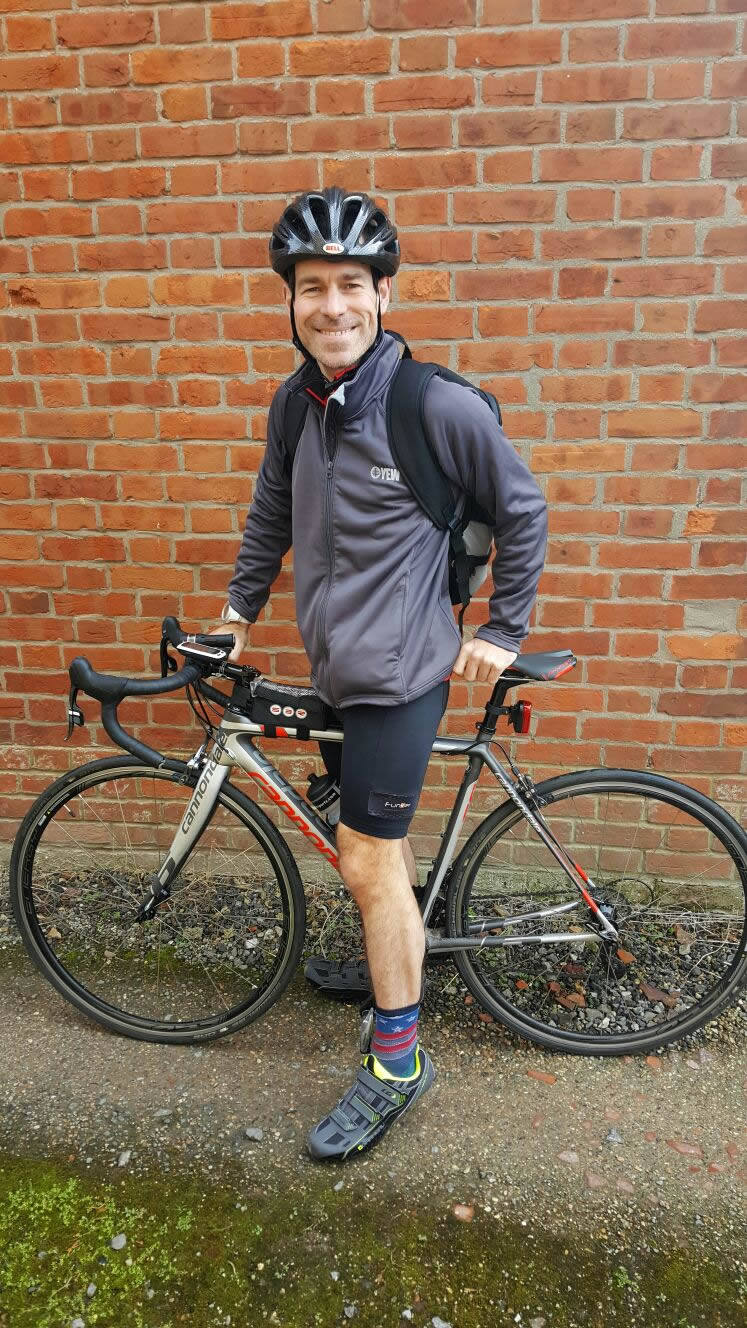 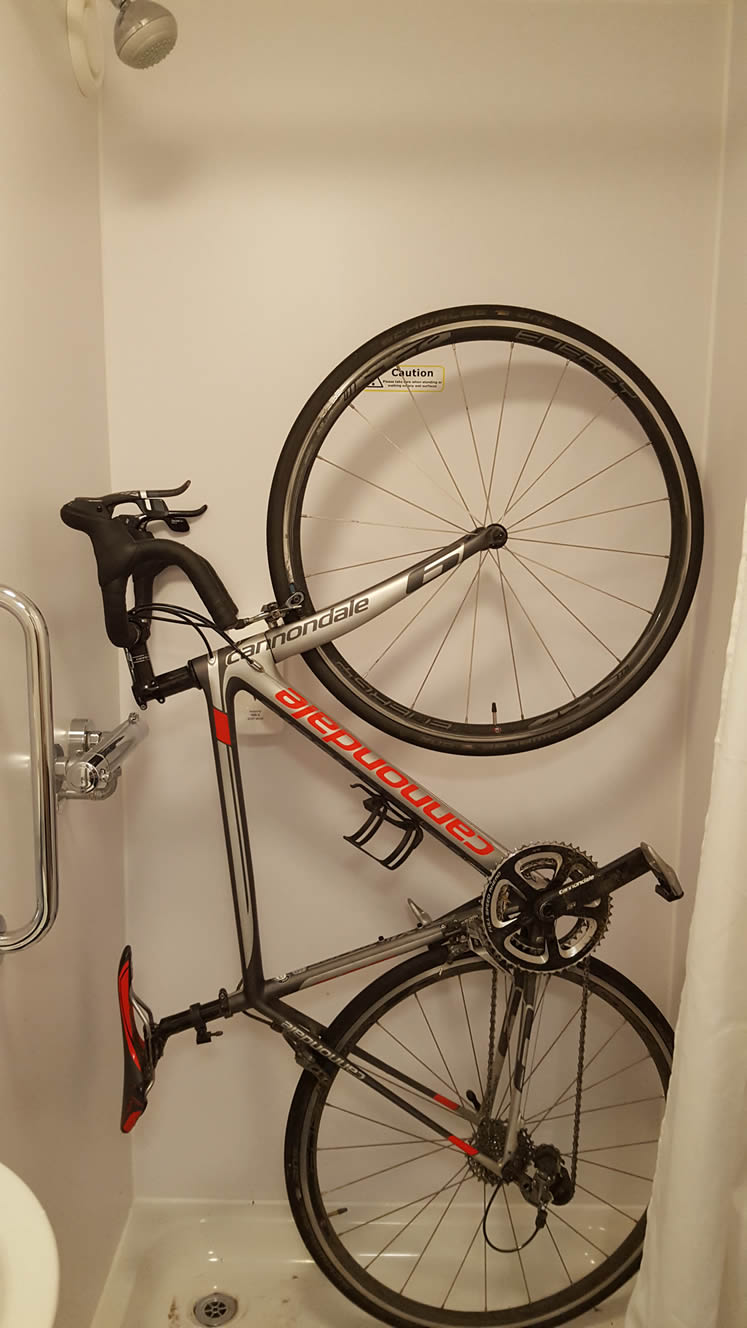 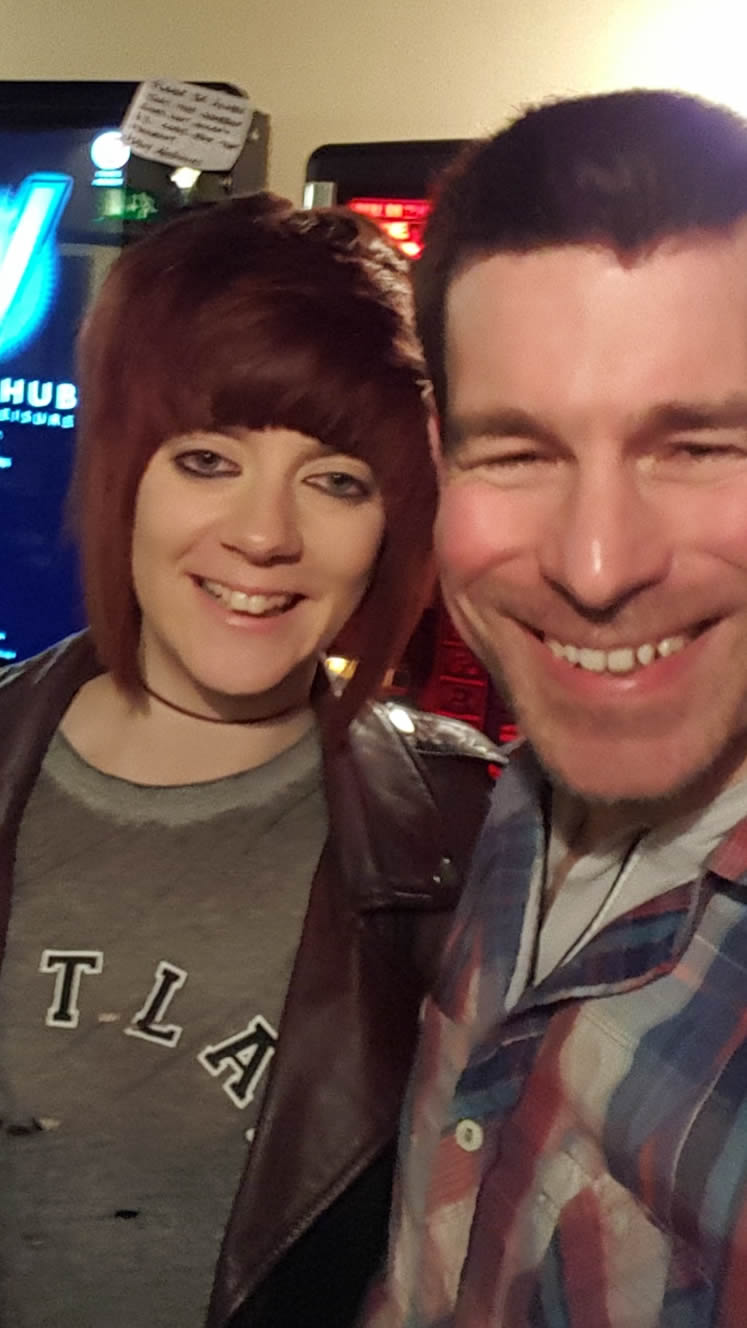 That helmet has to go.

Next up it's back to the stuff I know more about - the Haworth Hobble 50km on Saturday.

#Cycling,  #London2Paris
Comments
Not sure which cleats you've already fitted but I've found mountain bike ones much easier to get used to. If you get the multiway ones, you can pull your foot upwards to release as well as to the side. Making to tension lighter also helped.
Practice does make a difference- find a quiet road and unclip, reclip again.
What helped me was practicing unclipping at the 6 o'clock position, I kept trying to unclip at 12 o'clock and running out of space to put my foot!
I fell over at least four times, and had a few near misses. Main thing is to have a designated clipping out foot, and always clip a certain safe distance from a junction. Always plan to stop at a junction, even if you think it's quiet.
Once you get a bit smoother with it, then emergency unclipping does get easier. Try not to panic and start thrashing around in the "cat with it's paw trapped" style!
Have a look on the BIKE thread on fetcheveryone, that's got some good tips.
It does get better, honestly :-)

This is the sort of cleat for your shoe http://tinyurl.com/kyfvyrg and the type of pedal ( has a platform, easy to rest your foot on when not clipped in) e.g. http://tinyurl.com/spdpedalThanks for your comments! I've seen videos giving conflicting advice on clipping out position - Livestrong says 12 o'clock at which point I have no leverage at all. So I think 6 is the way to go!

I'm trying to image batting a small ball away with my heel with as much force as possible to stop me pivoting from the axle which fails to disengage.

You're right though - it's all practice!!