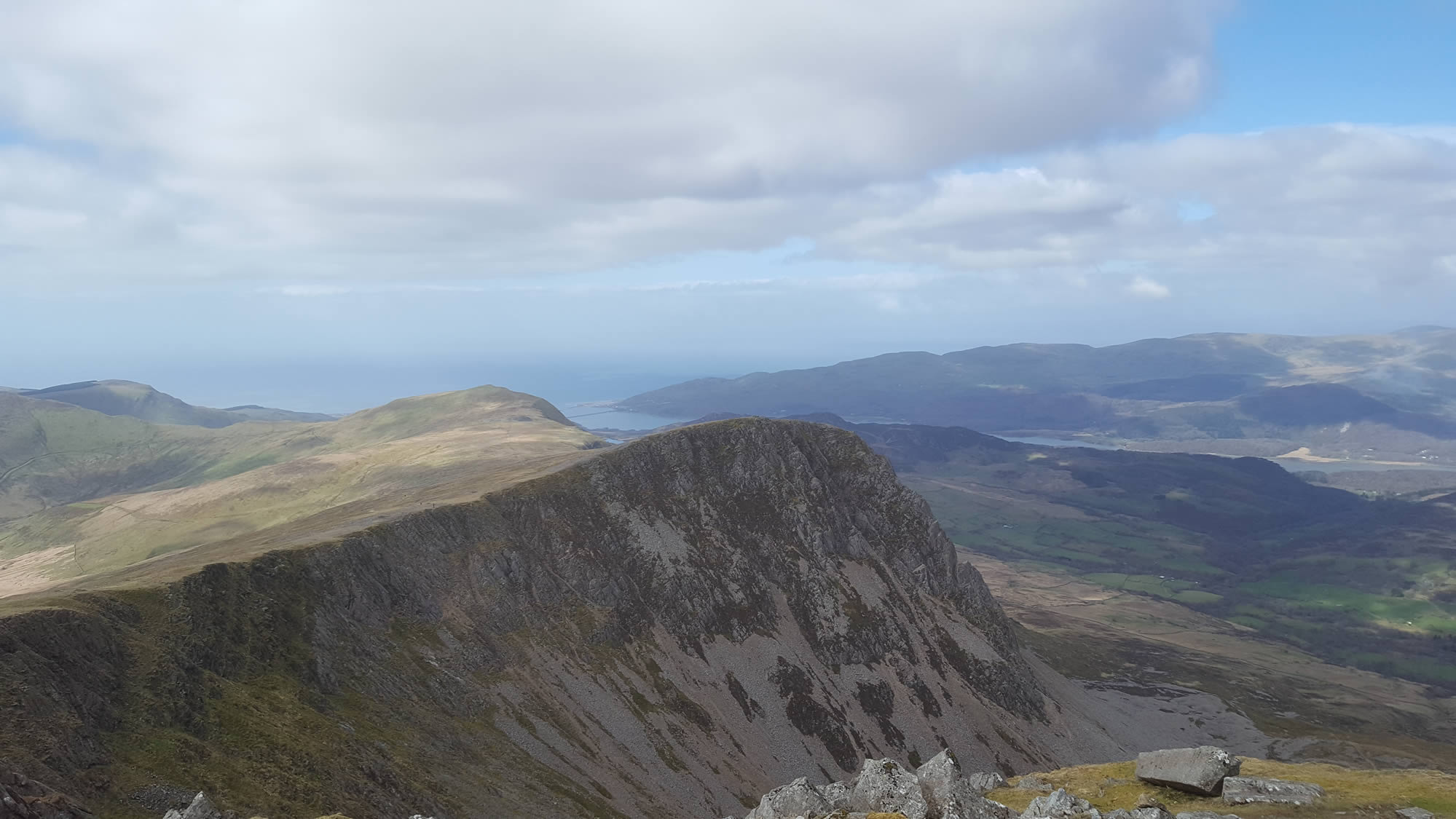 As I write, we're only 3.5 weeks out from the Dragon's Back race - surely the toughest personal challenge I've taken on so far.
It starts in Conwy on the 20th May 2019 and ends almost 200 miles South in Llandeilo on the Friday, having covered pretty much every significant peak on the way down. Every day is an ultra distance over some extreme terrain with the added challenge of largely being left to your own devices in terms of route choice.
Each overnight is a camp site with 8-person tents which, along with our 60-litres of overnight bag is moved on our behalf by the race team.
I thought I'd write some notes down on how things have gone in the run-up to this because I am sure, like any campaign plan, it won't survive the first engagement with the enemy and it'll be interesting to see a before and after! 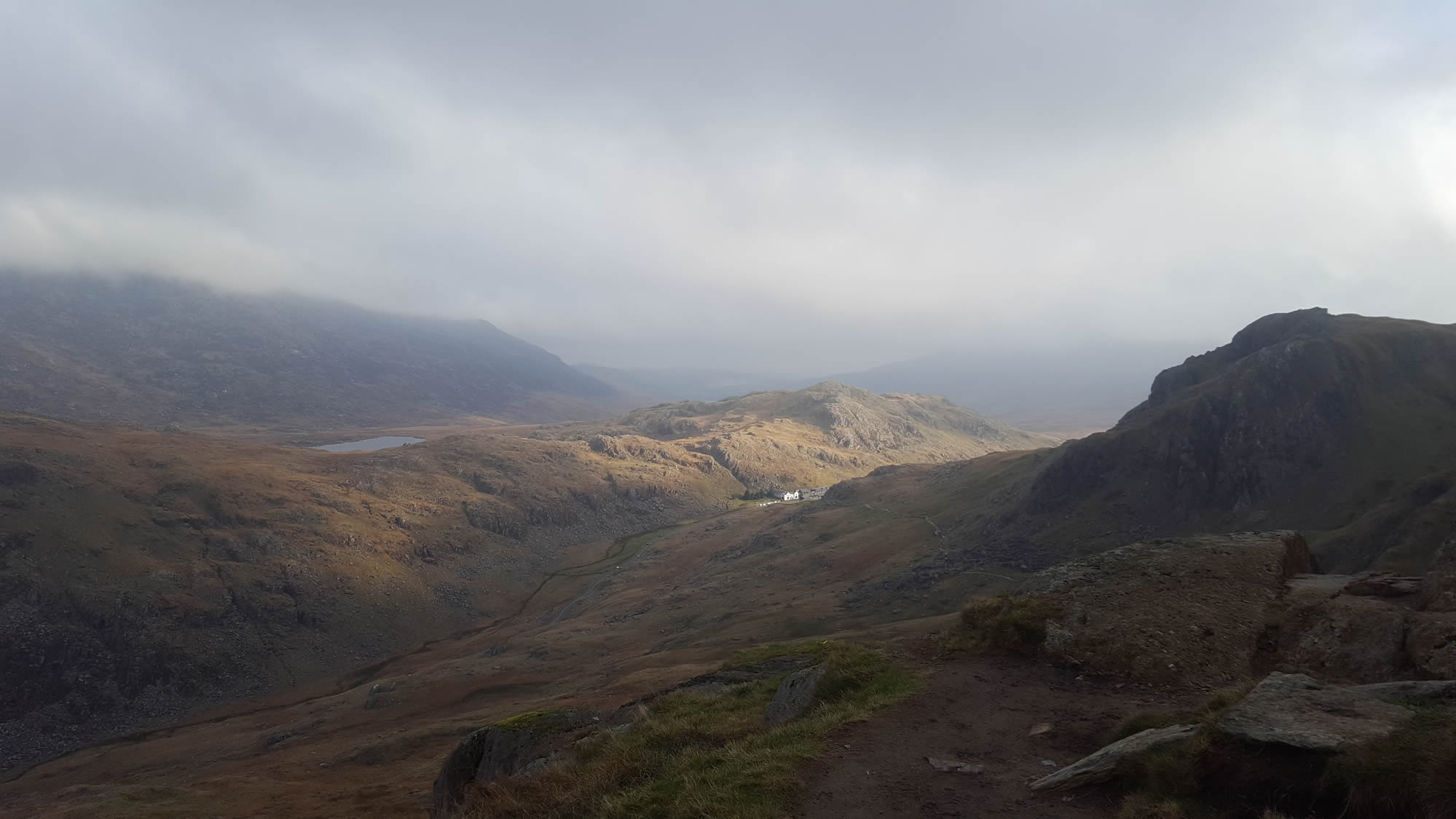 There are many new experiences for me on this race, some of which I've been able to mitigate with recces.

The closest thing I have on my CV is a solo run years ago around the coast of County Clare over the course of a week.  So long ago in fact that there was no booking.com or any decent online maps and I remember ripping the pages out of a specially-purchased road atlas (this almost broke me as I hate destroying books!) and that was my sole means of navigation.
It was around a marathon a day on paper, but often longer as the B&B I'd booked (usually out of necessity in the middle of nowhere) would turn out to be a good 3 miles out of town (or what passed for one) where I needed to source my dinner.  One night there was so little civilisation, dinner was 7 bags of Tayto crisps and 6 pints of Guinness in a tiny pub full of drunken Irishmen, one of whom drove me home.
I will always remember that experience as being a real life highlight.  I had everything I needed in a crappy backpack, didn't know what was around the next corner and felt absolutely alive and free the whole way.  I want to do more of this in the future.

Another challenge as 5 days' worth are needed - I don't even have 5 serviceable pairs of shorts yet.   I have a Suunto 9 watch and though purists may object, it will be my main means of getting round.  I need to find a way of annotating the waypoints to indicate a section that is more free-form nav rather than a line to be slavishly adhered to.
I'm going with the Saucony Peregrine shoes -  I have the last but one version rather than the latest which don't feature a rock plate.  They are a good compromise between grip and cushioning - there is a lot of rock and a lot of road.  I've found the nature of the steeply-sloping ground often twists the shoe and the insole rotates and lolls out of the shoe like the floppy tongue of a dishevelled dog.  I'm going to try glueing it in but having it removable is better for drying and there is a lot of bog.
I took poles to the recces but didn't use them.  That sounds ridiculous and probably is but as the recce days were short versus the real race day, I thought I'd give the quads more of a work out.  Essential for the race though I think.

Food is another new challenge.  There is morning and evening catering but hill food has to be brought and carried.  I need to think of something that won't go off by day 5.  My usual staple is a flapjack or two and nuts.  I'm not sure that will work here.  It's going to devour calories.

This is always the big one whatever the race.  I'm convinced every race from 100 metres to 1000 miles is largely in the head.
I've found during recces my confidence actually drained, so hard were they!  However that confidence rebounded in the days afterwards.  I've had both good and bad weather during these - a cold and wet week would be a very difficult situation for me.  Any ultra is about getting to the next checkpoint and I will need to just keep moving forward.

I've used a GPS on my recces and still managed to go off-line on a regular basis.  If I restricted myself to navigating using the map only I'd end up in Cornwall.
The nature of the route is that most of it is free for you to choose your own line between mandatory checkpoints.  There is a suggested line on the map supplied with the race and most of the time that's the way to go.  I need an efficient way of telling myself when to closely follow the line on the watch and when to be more flexible.

I generally run quite fast and I like running fast frankly.  That's not going to fly here and resources have to be eked out over the five days.  During the recces I've been very frustrated at how slowly I'm covering the ground but afterwards have realised this would still be ok for the cutoffs on the day.  The mental stress of fretting about this has to go.  My main aim is to finish each day before dark. 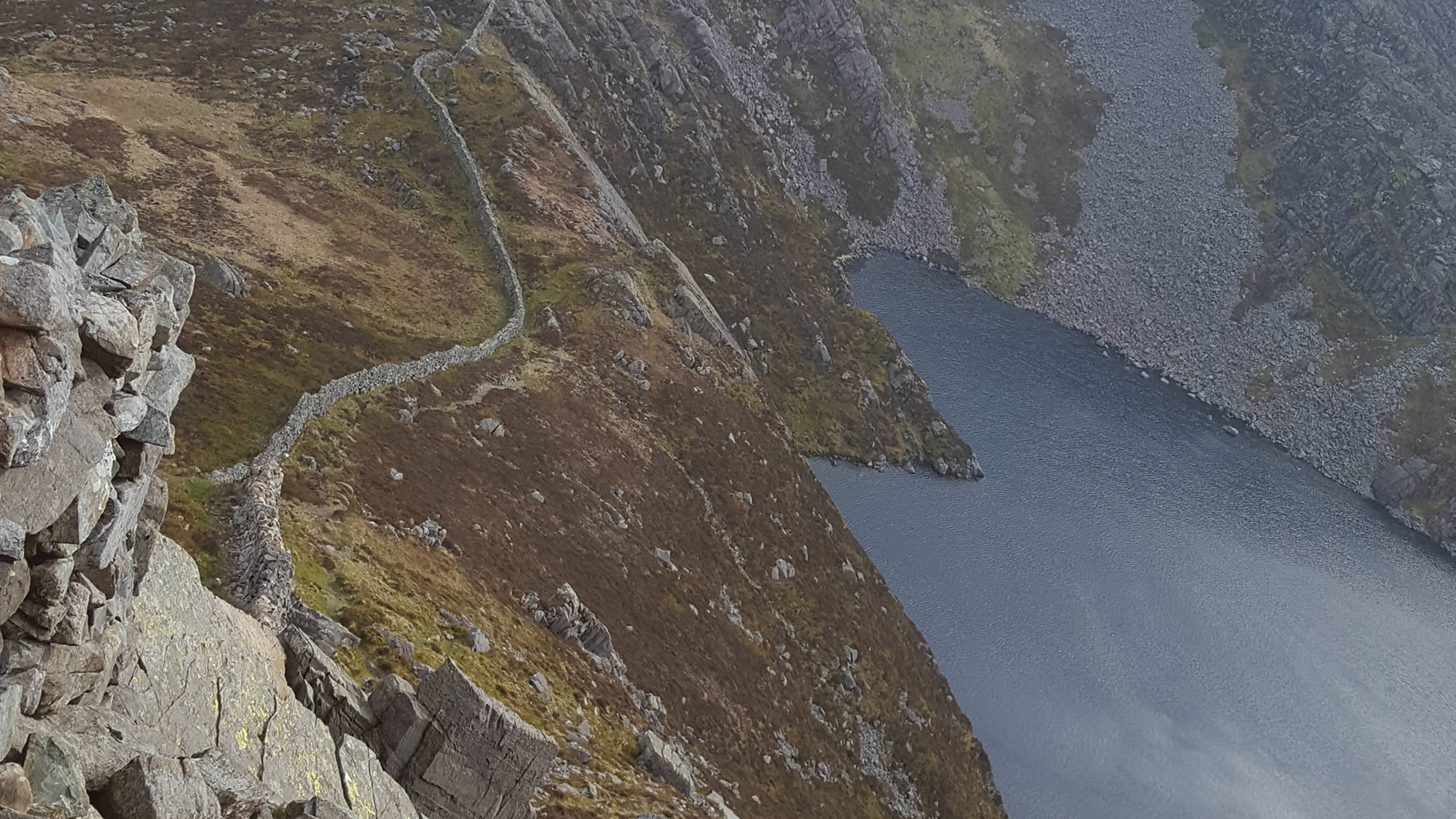 I've managed to recce most of days 1-3 and I'm really pleased I did.  I've never actually recced a race before but this is something else.  Had I turned up cold to this thing it would have been an enormous shock.
I ran most of Day 1 in November last year and days 2 and 3 this year. Each day has thrown up its own new challenges.
Day 1 features increasingly steep and rocky ascents and descents.  I had awful weather for the first leg - the tops were a white-out and there was a very strong sub-zero wind making progress a slow and miserable trudge.  I didn't cover Crib Goch having been warned off due to ice so I still have that to experience.
Day 2 is extremely testing terrain.  Day 1 is very hard but at least there is generally a clear route ahead.  Day 2 leaves a lot to your own imagination and the going underfoot is very tough.  Several times I couldn't believe what I was on could possibly be deemed a trail, so broken and steep was it.  Having covered Day 1 I admit to a small amount of complacency that I knew what was going to be thrown at me.  I was very wrong about that.
Day 3 is up over Cadair - the second highest mountain in Wales and my mistake here was, having summited pretty straightforwardly, feeling the main test of the day was done and I'd now trot round the rest of it as if out for a Sunday stroll.
Finding a good line is essential and the recces have been invaluable experience.  Often evidence for any path - and 'path' is really an extremely generous term for it - is almost completely invisible amongst what is often just a boulder field.  Frequently you can see a route-line up ahead but it vanishes when you get close.  Or you're actually on a path but you don't realise you're on it until you wander offline and it becomes visible again when at a vantage point just above.
I ran all three solo.  I'd have loved company but ended up doing the latter two mid-week.  I actually enjoyed the solitude for the mostpart and I expect the field in the race will spread out quickly and that may therefore be the situation on the day.  On recceing Day 2 I didn't see a single soul the whole way to Dollgelau in 26 miles.
I'd like to have covered the remaining days and the bits of Day 2 and 3 that I missed but it's a considerable logistical and time challenge getting there and away from here.  At least 9 hours door-to-door each way by train and then local, infrequent buses.

I've covered about 1,300km so far this year and hope to add another 100-120km this week before cutting it back over the last three weeks before the race.
I'd have liked more elevation and injury has taken the edge off the km total so I'm giving myself 7/10.
There is a Dragons Back group on Strava and I've been surprised how (to my mind) few km are being covered by the majority of those on it.  What everyone else does has no bearing on my race though of course. 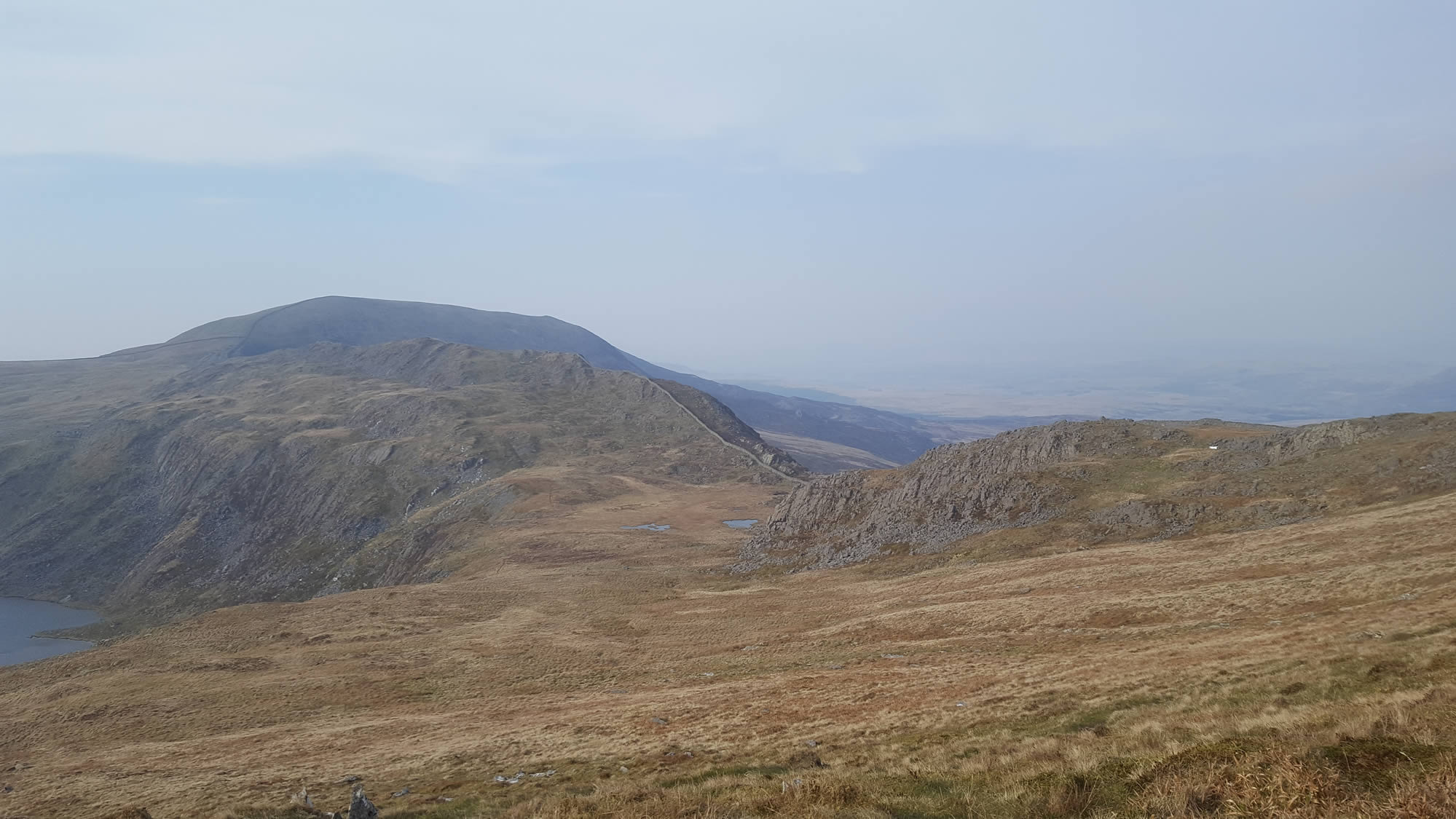 I'm really looking forward to the race despite being very daunted by it.  Preparation hasn't been ideal but it's been a long way short of a disaster. We will soon find out if it's enough.
#Training,  #Trail Running,  #mountainrunning,  #DragonsBack
Comments
No comments yet.. why not be the first?
Most-read Posts