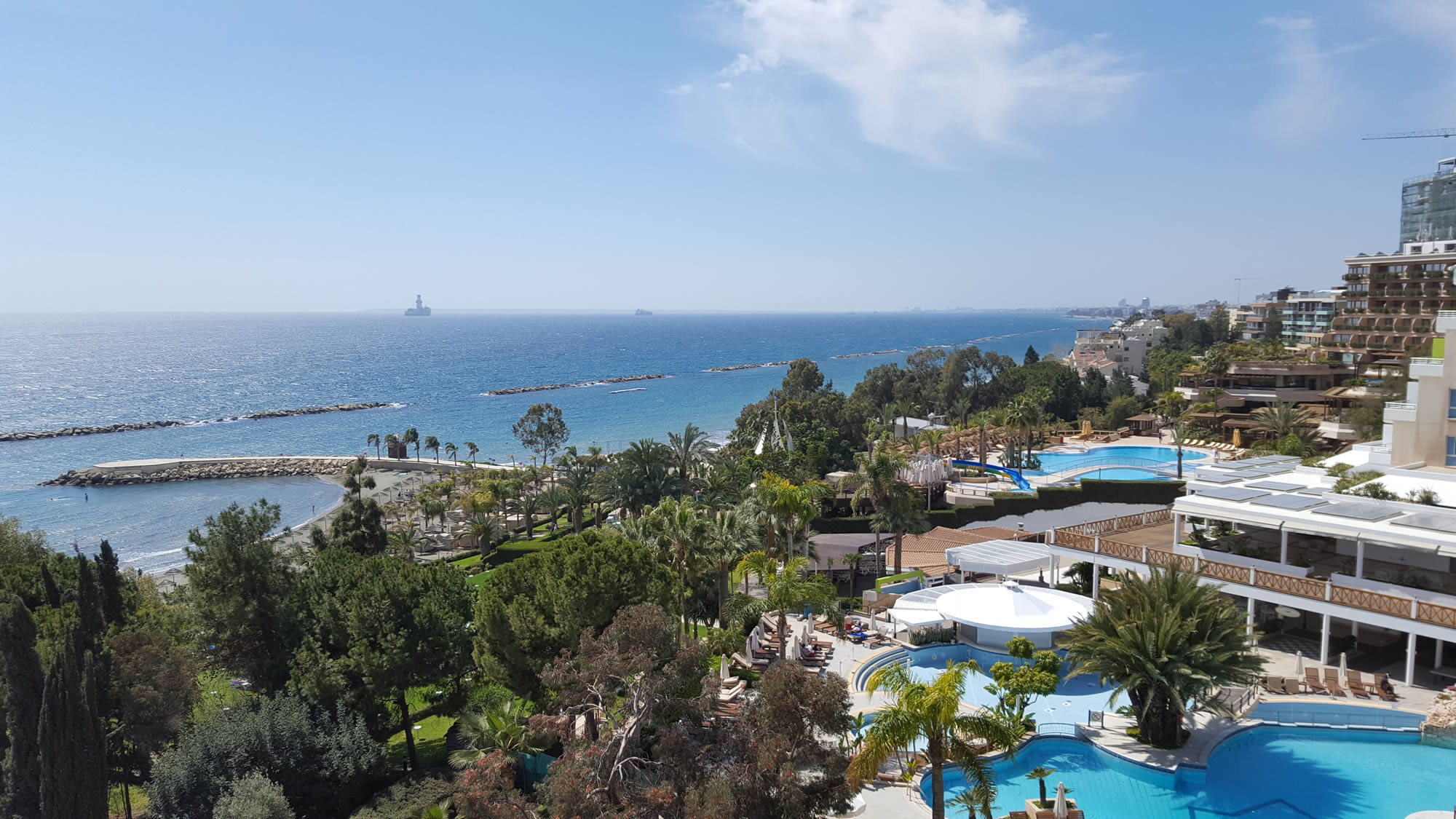 My top 5 races - based entirely on the food!The Boston Marathon
share this story

20th March, 2017
Some races Susie talks me into are ridiculously hard; some relatively 'easy'.  It's the good cop bad cop routine, as used by the Stasi.  But in this case even the good cop is peddling a marathon in the Cyprus sun.

Some contrast to Haworth last weekend, this!  The misty moors and trails to the heat (warmth really; it never was to get completely boiling) of the seaside road course of the Limassol marathon.  Both very but differently beautiful; and differently challenging.

The view from the hotel bedroom

I thought this would make a good last long run before Boston - let's see about that in 4 weeks' time - and made the trip out with Susie, Shaun, Ben (plus Alison who are staying on afterwards, lucky them) and Elise, looked after by the lovely Becs and Carole from Breathe Unity.

I flew in Friday but arrived pretty late, leaving little time to do much else than sample the local beer (Keo) - which my two fellow Cypriot neighbours on the BA flight insisted was the best (when it's hot and sunny you want something cold and fizzy and it's certainly that!)

It's the pasta party on the Saturday evening and I took the chance to jog the 10k down from the hotel (The Mediterranean) along the path adjacent to the sea down to the marina, mainly because I've done nothing at all the previous two days and the guilt has reached amber alert level.

The marina's a lovely setting - all restaurants and cafes and perfectly still blue sea in the setting sun and the pasta party served up the best food I've ever had at one of these things.  Usually it's tough tubes of the stuff and a bland anonymous sauce.  Here you don't just get a salad, but one with sundried tomatoes, halloumi, pomegranate etc. The pasta of various varieties is lovely. Proper catering!  There's a DJ playing pretty much to himself (but really getting into it!) while he waits for the season at Ayia Napa to kick off and steadier work!  We got more social - enough to fill the dancefloor were we so inclined - with Jo, Paul and Lee joining.

It's an early night as the race starts at 7am and race bus at 6 (good transport around here) from outside the Mediterranean so clubbing was kind of off the menu (and let's face it, when did I last do that?!)

loading map..
Lots of races going on this weekend as part of the overall event - a large field (8,000 strong) has run a corporate 5k on the Saturday; today there was the marathon, half and 10k all going off a few minutes apart.  The sun is up, the sky is cloudless and the massed start lines up on a wide boulevard right by the sea.

I haven't really got any pace plan, just go as I feel and as usual was to cock that up.  I also thought I'd try out the Stryd running power meter, lent to me by the guys at Apex Sports, and experiment with swapping it onto alternate legs each 10k to see if anything interesting was revealed in the data.  I'm working through that and an update will follow! 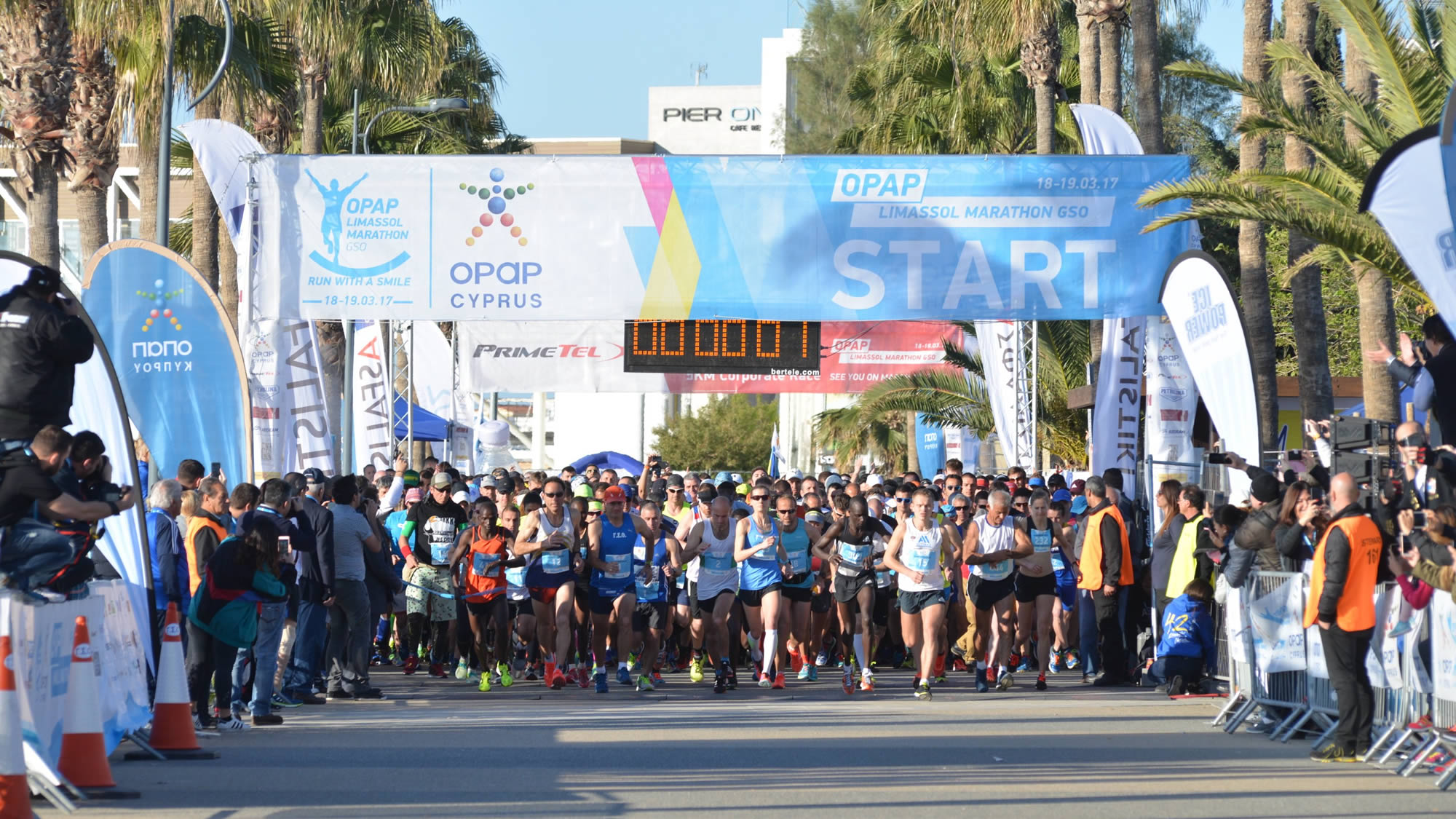 At the gun the small elite field (including our Joasia Zakrzewski) disappears as if teleported out of the country.  The first 10k loops back behind the start past the Aldi we raided for breakfast supplies on Saturday night (halloumi pie ladies and gentlemen!) and out into an industrial area on flat roads.  On a part of the course lollipop-shaped with a roundabout at the end I used a portaloo and rejoined the race on the return leg of the 'stick' only to get accused of taking a shortcut by another runner!  'What did you do?!.. What did you just do?!'.  ' I just went to the bog, mate!' - profuse apologies and hugs(! -  yeah, we're in a race!) gushed forth.  We'd only run 6km! Who cuts 500 metres off that?!

From here to just beyond halfway it's a long straight, wide, traffic-free and pretty flat road out to a turning point at the far end of the course.   It was warming up fast but one great thing about the race is that there are pit stops regular as clockwork every 2.5km with water, high 5 drink and gels so I took on plenty.

About the halfway point there's a fascinating-looking ruin - maybe a columned temple - visible to the left and I had a strong urge to go and explore it there and then, not least because I was tracking for a 1:30 half which was unnecessarily fast.  I love this kind of thing though by the time I passed it on the return leg I was in similar shape, my columns no longer giving much support and the rest of me partially demolished!

Past the turnaround it's downhill back into town into a welcome breeze and a little more shade from the buildings.  It would be a direct line to the finish but for an extra loop which was pretty hard at that stage (about 31km in).  It puts you into a holding pattern for a few kilometers before rejoining the run-in to the finish around 37km into the race.  Can't say I enjoyed that.. it's not as if you're running any further and it's flat there but I'm not a massive fan of laps.  However, get that done and you're all but home.

From 20 miles on I felt pretty battered. Perhaps the heat, perhaps last weekend's 50k, perhaps both but I summoned up something or other for the last kilometer back down the seaside boulevard and crossed the line in 3:10 and bits. 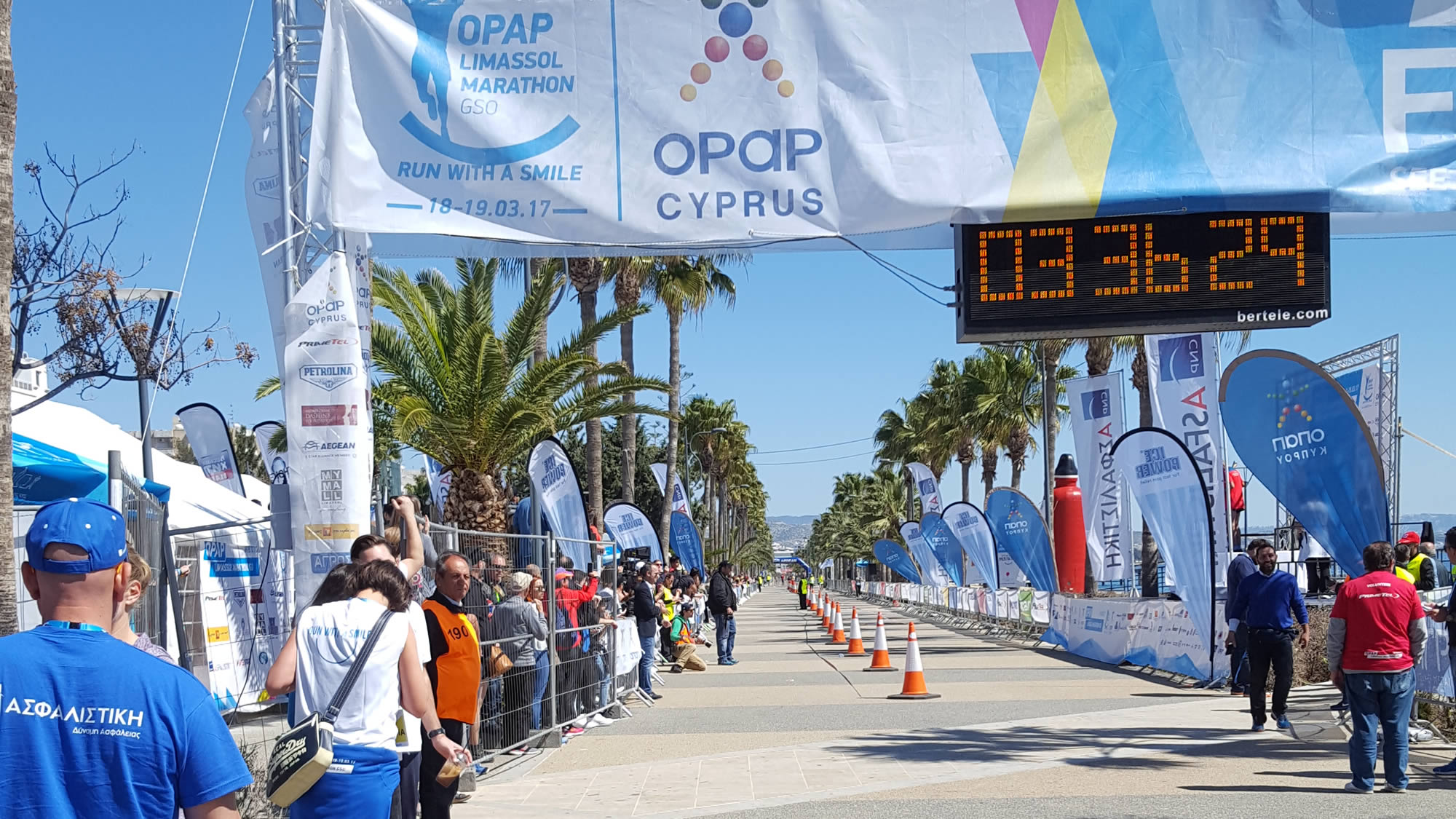 Fortunately the race goody bag included a beer token and the tent by the finish line someone who could massage a calf. Though I later found out that was the med tent not the massage people and I've been wracked with guilt like a hospital bed-blocker ever since.

Well worth considering this one..  it's possible to get a fast time here for sure as Ben can testify having sliced 15 minutes off his pb.  My watch reckons on about 150m of climb but it's all very gradual out to halfway which you barely notice.   Can't fault the organisation and there was plenty of refreshment out on course.  As it's low season, you can get here and stay very reasonably.  The bus from the airport (Larnaca, not sure about Paphos but I suspect similar) is only 13 Euros and journeys within the Limassol area are only 1.50 Euros irrespective of distance.

The food is great - not least because halloumi seems to be a staple ingredient of pretty much everything.  We made a good dent in the Mediterranean's epic breakfast buffet too though they have the usual over-zealous help, ghosting and clearing your plate and cutlery, leaving you to steal knives and forks from other tables to continue the browsing.

It's been a great weekend with some great people and I only wish I'd taken a few extra days to make the most of the place! 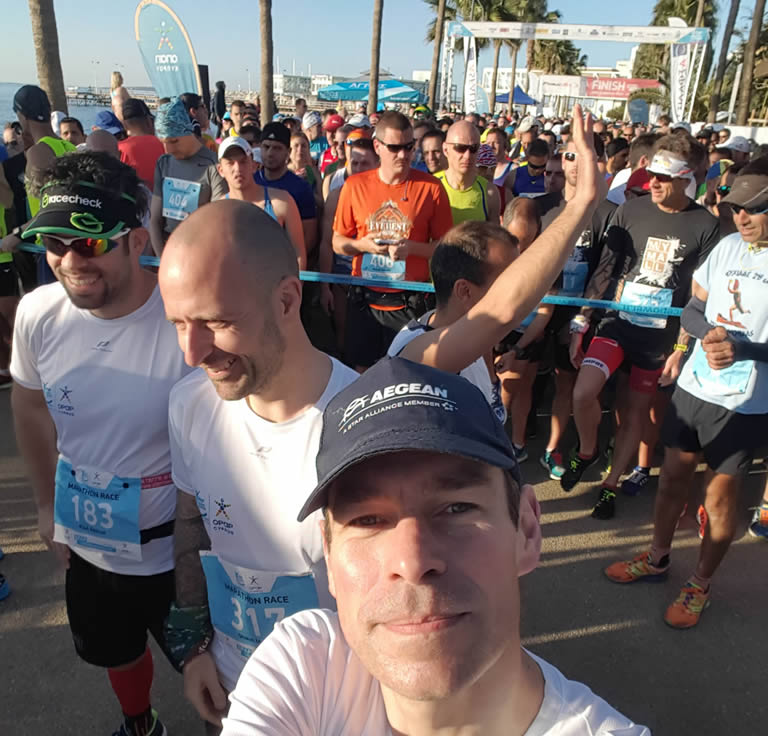 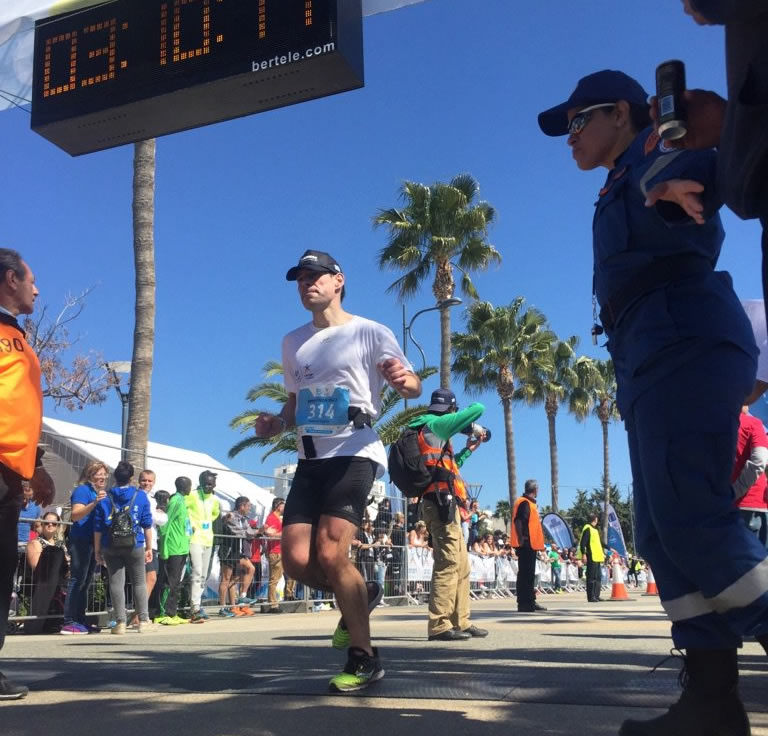 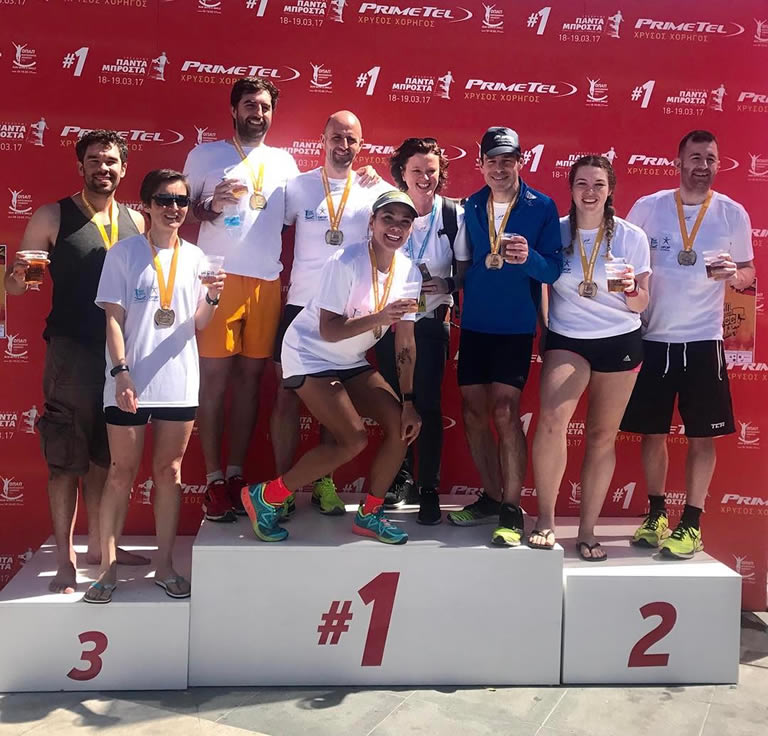 Next up is the marathon big one - Boston - before a return to the long stuff in the mountains.