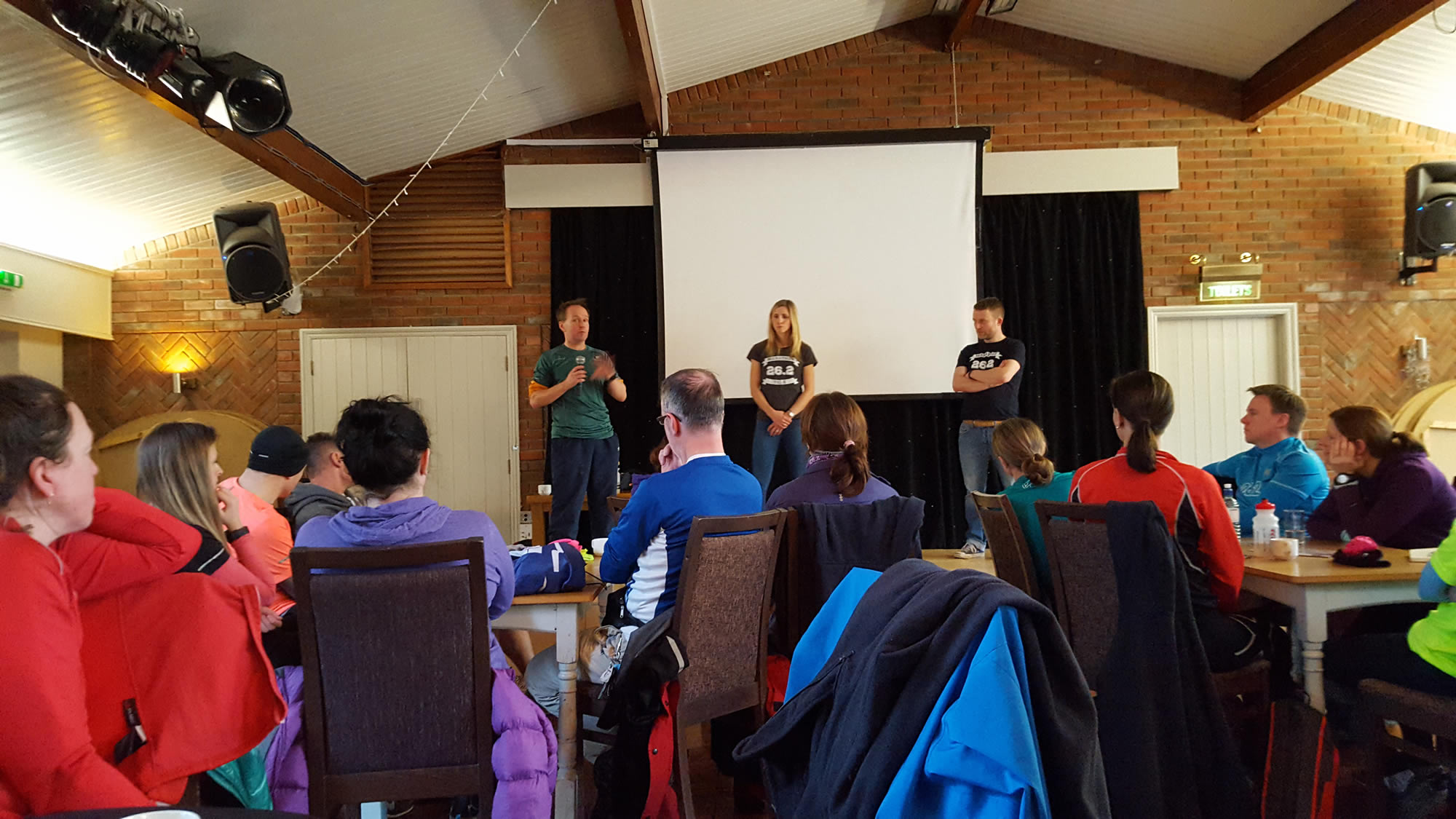 14th February, 2017
This was Tom and Martin's fourth MarathonTalk run camp down in the New Forest and my second. I was really looking forward to it after last year. I hardly ever do this sort of thing - the only other one I can remember going to in fact was years ago with Runners World - but last year's was excellent and this one looked even more full of events.
It's hosted by the curiously-named Sandy Balls - which no matter how many times you say it, teases out the schoolboy humour you've tried to suppress all your adult life.

People have come a fair old distance to get here and all have tales of horror of a Friday night stuck on the M25 or similar but nobody is regretting the trip as we huddle round some braziers supping coffee until someone helpfully points out there's a bar.

Lots of familiar faces from last year's event and Twitter and some have been to all four so it has a loyal following. Also Martin kindly used my event booking service to sell it so I know it sold out in a few days. Get in fast next year, folks!

I missed the Friday night and Saturday morning last year, arriving late, so this time was determined to make it to the local ParkRun (Moors Valley) which traditionally kicks the weekend off. My ParkRun attendance record is pretty shocking despite signing up almost from the off. I've only run 9!

While contemplating how little sleep I was in for, Anna cheerfully suggested we run the 9 miles to the start which I obviously couldn't resist. So I stayed up til 1am with the chalet wifi as patchy as Daisy Duke's jeans plotting a route out to avoid all the roads, and thinking 'as long as I get 15 hours sleep tomorrow.. I'll be good!'

I used www.rowmaps.com which looks like hell but is actually a really good resource for footpaths/greenways/bridleways etc. and came up with this..
loading map..
We met at reception at 7 as the temperature hovered around zero, fired up the Suunto and headed off out to Moors Valley. What a great run! I love this sort of thing. A mini adventure where you don't know what's around the next corner. We're chatting away and it seems to take about 5 minutes. But there's lots of leaf-strewn trails and forests and wildlife with only an unavoidable, but short, stretch of road to get in the way and I could have run that all day. 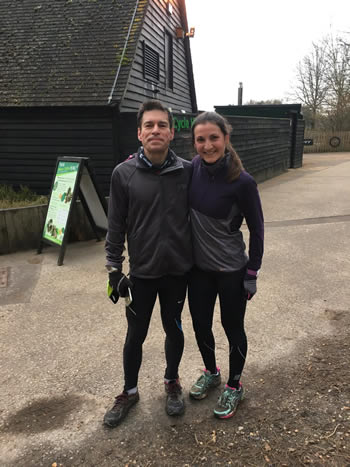 The toasty warmth built up from that run dissipates disappointingly quickly as we're waiting for the ParkRun kick off - we turned up about 15 minutes early - as the Camp party boosts the turnout by a good 100 people. The joint mobility seems to have gone the same way as the warmth and I start at a snail's pace but gradually pick it up as life returns once again. Nice course! Wide forest trails, lakeside paths. I ended up on the finishing 500m trailing some young lad who was going for it so I gave him some cheery encouragement only to accidentally step on the back of his shoe and nobble his race. Oh well. Life is hard!

There's time for a shower before the weekend event opens properly with everyone congregating in the function room but there's another running session coming up so I don't bother despite smelling faintly of cow pats.

Martin and Tom kick things off and then there's an interesting chat on motivation with Andy Lane and Liz. Always good to hear the elite field suffer with the same pre-match nerves as the rest of us!

Then there's a speedwork session a mile up the road which is a new format to me. 1000m at 80% effort, 15 seconds rest then 300m hard with a further rest before three more of those. I jogged up to the start and my legs were pretty heavy so I decided to do my own thing and did some short hill reps instead in the same area which brought the total up to around 20 miles for the day.

Somehow I'd only eaten a sausage bap all day so the buffet dinner was a food oasis in a starvation desert and I demolished a vast amount. You get pretty well fed here. Two meals are included and they're not stingy.

More entertaiment from Vassos Alexander talking about - yes - running preceeded the quiz. I'm aware I'm very lightly brushing over all the content here but there's so much going on, no-one's going to read this post if I go into any more detail!

The less said about the quiz the better. I thought we had a decent team. I thought I knew stuff. I especially thought I knew stuff about running and that was 90% of the rounds. We even had Lucy who does PR for running brands! But the night ended in ignominy and second last - saved from a near zero score by a ridiculously easy picture and music round that someone who'd never seen a picture before could have had a decent stab at.   I drowned my shame in a pint of Ringwood's Razor Back.  It takes several pints to drown shame it turns out.

I ducked out of the last item on the agenda - a headtorch run at 11pm+ mainly because my legs were barking but there was also something about the Razor Back / Jogging combo that seemed like a bad idea.

So to Sunday.. and another run in the New Forest!  And another run I managed to duck out of - I seem to have done a lot of my own thing this weekend and that is one of the features of the camp.  You can do as much or as little as you like.  This was an interesting 10 miler where you had to finish by 12pm at the latest and set off so you did so as close to 12 as possible.  To be honest I didn't understand the rules when it was explained to me (though everyone else seemed to) and still don't now but a handicap race basically.

If you didn't want to do that you could run either 8 or 16 miles (one or two laps of a trail route) with Hayley Yelling - yet another elite athlete on hand - or, as I say, do your own thing.  My legs weren't up for a fast 10 so I didn't formally enter the handicap race but ran anyway thinking I'd add some miles on.  The legs weren't thanking me though so in the end I rolled in at 12:04 and therefore I suspect last - but that racked up 34 miles for the two days with some speed and some hills so very worthwhile. 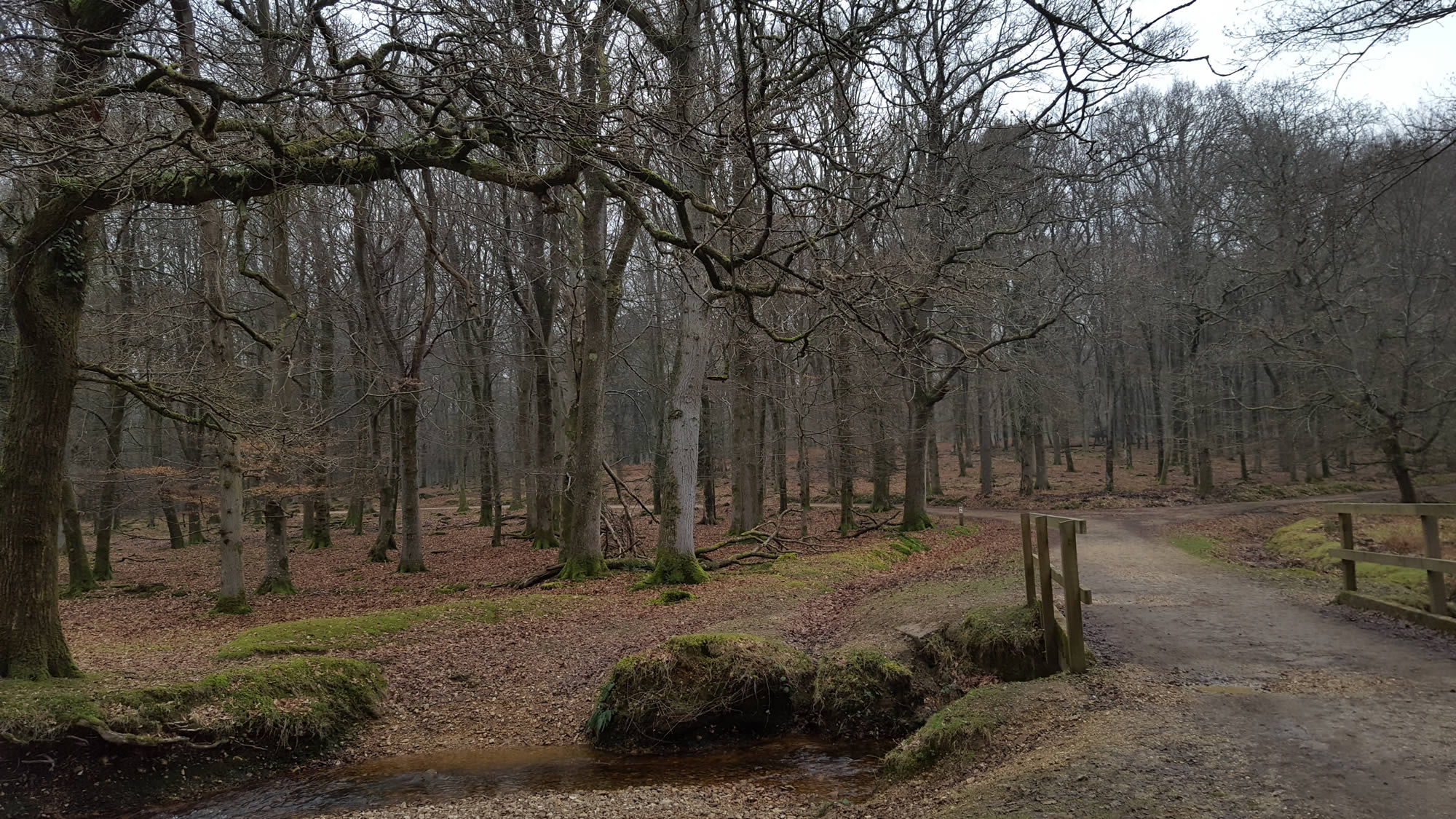 The New Forest is a lovely place to run and we only scratched the surface.  This 10 was the route of the Heartbreaker Half Marathon which is well worth doing (is it still on?) - great training for a full!

Yet again I'd eaten nothing at all which is ridiculous but was saved by the carvery which was a full on pile your plate high affair and I took full advantage before the camp was brought to a close and I caught the end of the rugby with Dan before heading back up the M3.

A really great weekend!  There is such a good, positive vibe about it.  You meet lots of like-minded people, get to speak to the training experts and elite and most importantly get to run in some fantastic countryside.

I think the camp is great value too including as it does a couple of large meals and 3 nights of accommodation plus all the extras.  Highly recommended - but as  say, get in quick, it goes fast!

#Training,  #Trail Running,  #Scenery
Comments
No comments yet.. why not be the first?
Most-read Posts